La Salle U. honors archdiocesan agency as ‘sign of faith’ 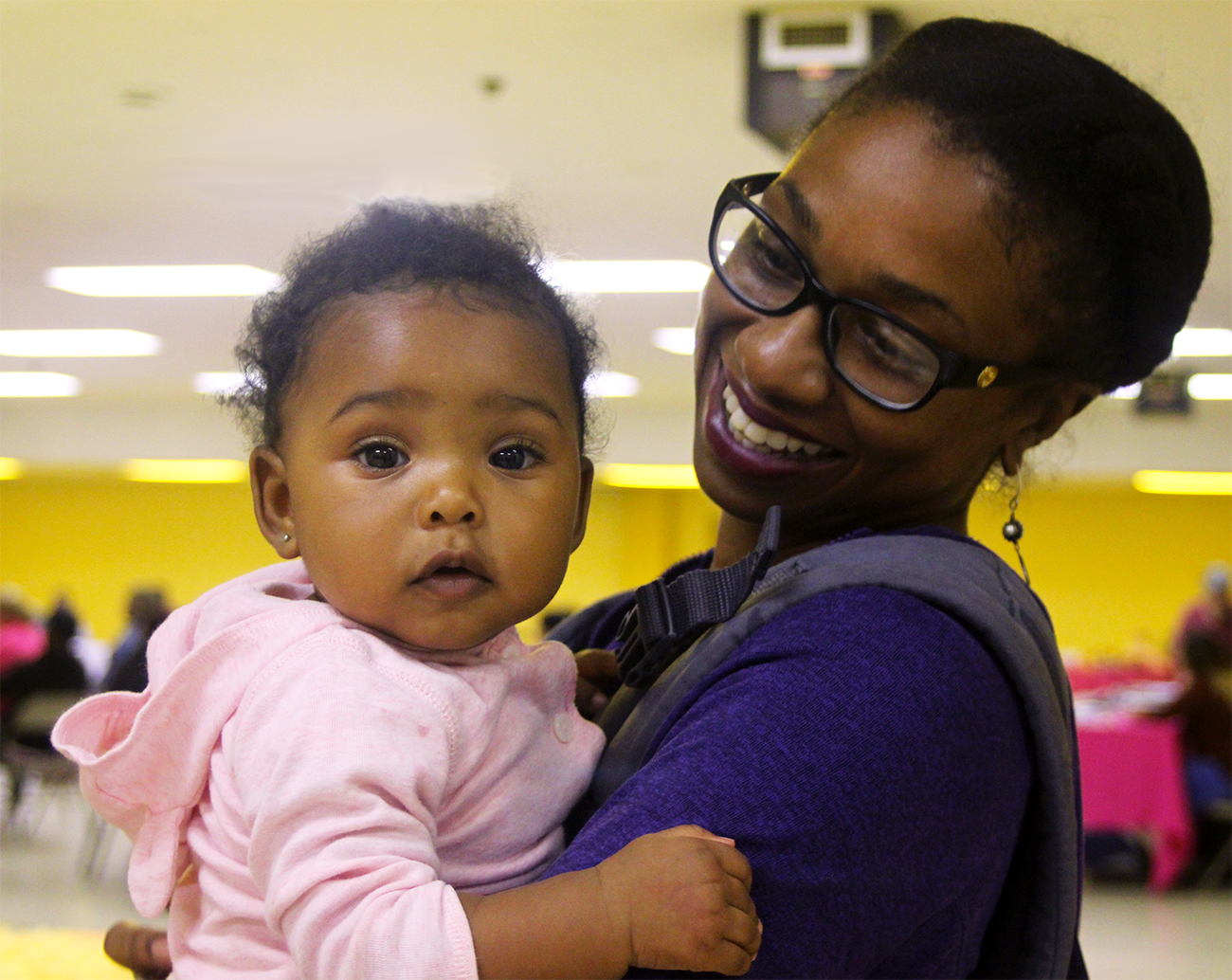 Imani Davis and her daughter Isani of West Philadelphia enjoyed parenting classes, refreshments and a sense of community during a Sept. 13, 2019 baby shower hosted by archdiocesan Catholic Social Services (CSS) and the Capuchin Friars at the Padre Pio Prayer Center in the city’s Frankford section. CSS received the Signum Fidei Medal from the La Salle University Alumni Association  Nov. 12 for its two-century legacy of service through an array of ministries. (Photo by Gina Christian)

Alumni of a local Catholic college have honored an archdiocesan agency for more than two centuries of outreach that would make a patron saint proud.

Awarded since 1942, the annual accolade derives its name – Latin for “sign of faith” — from the motto of the Brothers of the Christian Schools, the order founded by St. John Baptiste de La Salle, a pioneering advocate of education for impoverished and at-risk youth.

According to La Salle’s Alumni Association, individuals and groups receiving the medal are deemed to have significantly advanced humanitarian principles according to Judeo-Christian tradition, and to the aims of both the university and the congregation whose charism inspires it.

Along with its 14 nonprofit corporations, CSS annually serves more than 175,000 individuals of all faiths throughout the five-county archdiocesan area. The agency’s community-based and residential programs aid adults and children with intellectual disabilities, at-risk teens, low-income seniors, pregnant women and infants, impoverished households and persons experiencing homelessness, mental illness and addiction. 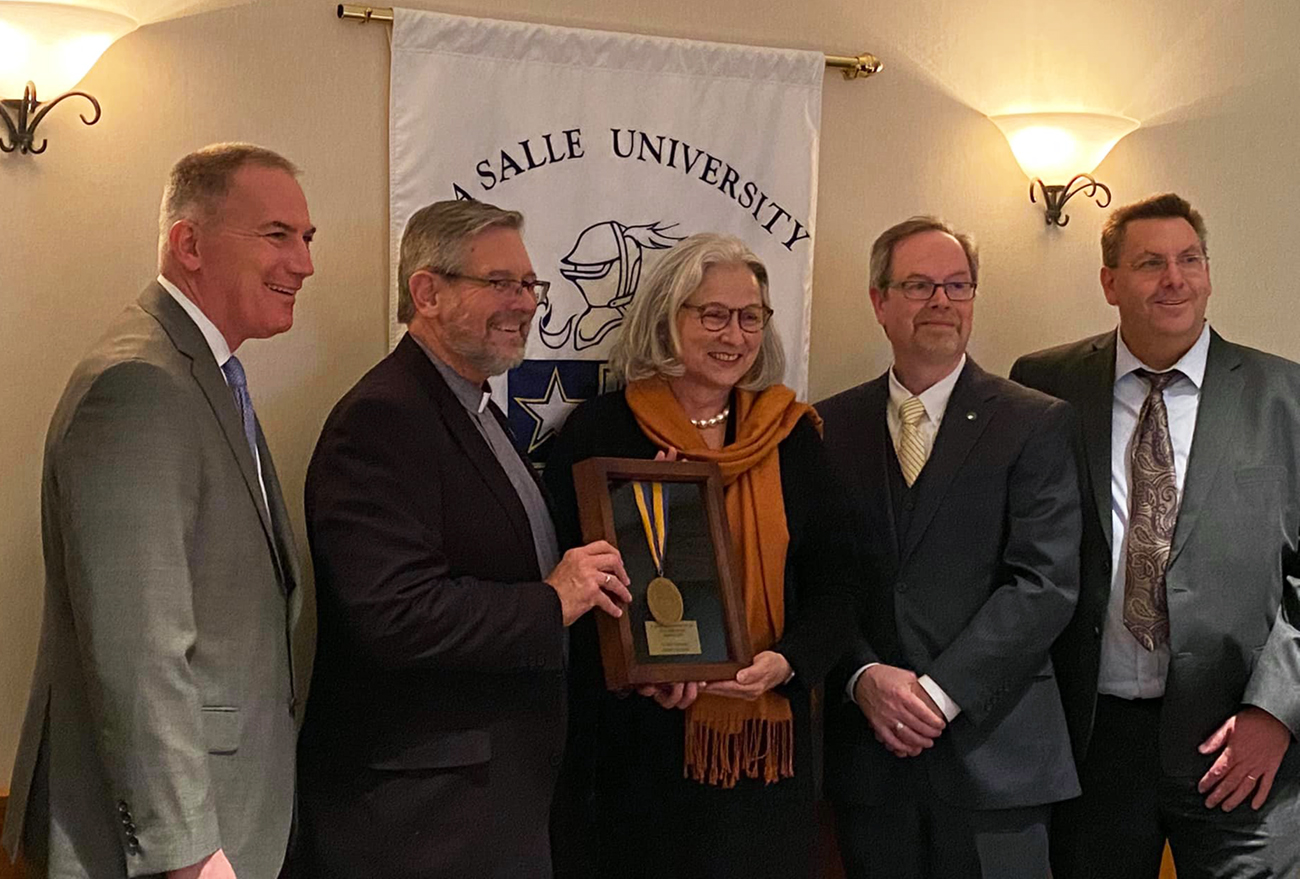 Those outreaches have taken on greater urgency during the COVID-19 pandemic, as demand for social services has soared. Amato noted that CSS was itself born amid a public health crisis: a yellow fever epidemic that ravaged Philadelphia in 1793, killing some 5,000 and straining the city’s institutions.

In 1797, said Amato, “a group of lay Catholic women responded to the needs of orphaned children whose parents died of yellow fever.”

Over time, that effort and various other ministries – many tailored to the needs of marginalized children – coalesced into the Catholic Children’s Bureau, which in 1964 was renamed Catholic Social Services of the Archdiocese of Philadelphia.

Three significant factors are “core” to the success of CSS’s mission, said Amato – the first of which is the ongoing mentoring received by staff through “the dedicated service of religious men and women who staffed (the agency’s) programs” and acted as “role models.”

Black said the Christian Brothers (whose ranks included one of his own uncles) “changed (his) life for the better and influenced (him) to be part of CSS,” where he has spent the majority of his professional career.

“In many ways, La Salle is a second home,” said Black.

Also central to CSS’s outreach is “a commitment to the poor, grounding in Catholic social teaching, that daily enables us to see our work within a larger context of human dignity and social justice,” said Amato.

And as CSS has increasingly partnered with government and private entities, the agency has cultivated “a constant attention to changing policies (and) best practices,” he said.

In recent years, that undertaking has “required tough decisions,” such as the closure of the iconic St. Gabriel’s Hall, a residential treatment program for adjudicated youth initially staffed by several Christian Brothers. The move was precipitated by broader trends to move from “larger congregate care facilities to small, community-based programs,” said Amato.

However, he added, CSS has evolved to keep pace with changing social service trends, and in addition to some 80 youth in residential care, the agency now assists over 500 youth per day – “mostly all remaining at home with their families” – through its Catholic Community Services program.

That work is all “part of what it means to be Lasallian,” said Black. “We accept people where they are, and we show the friendly face of the church.”