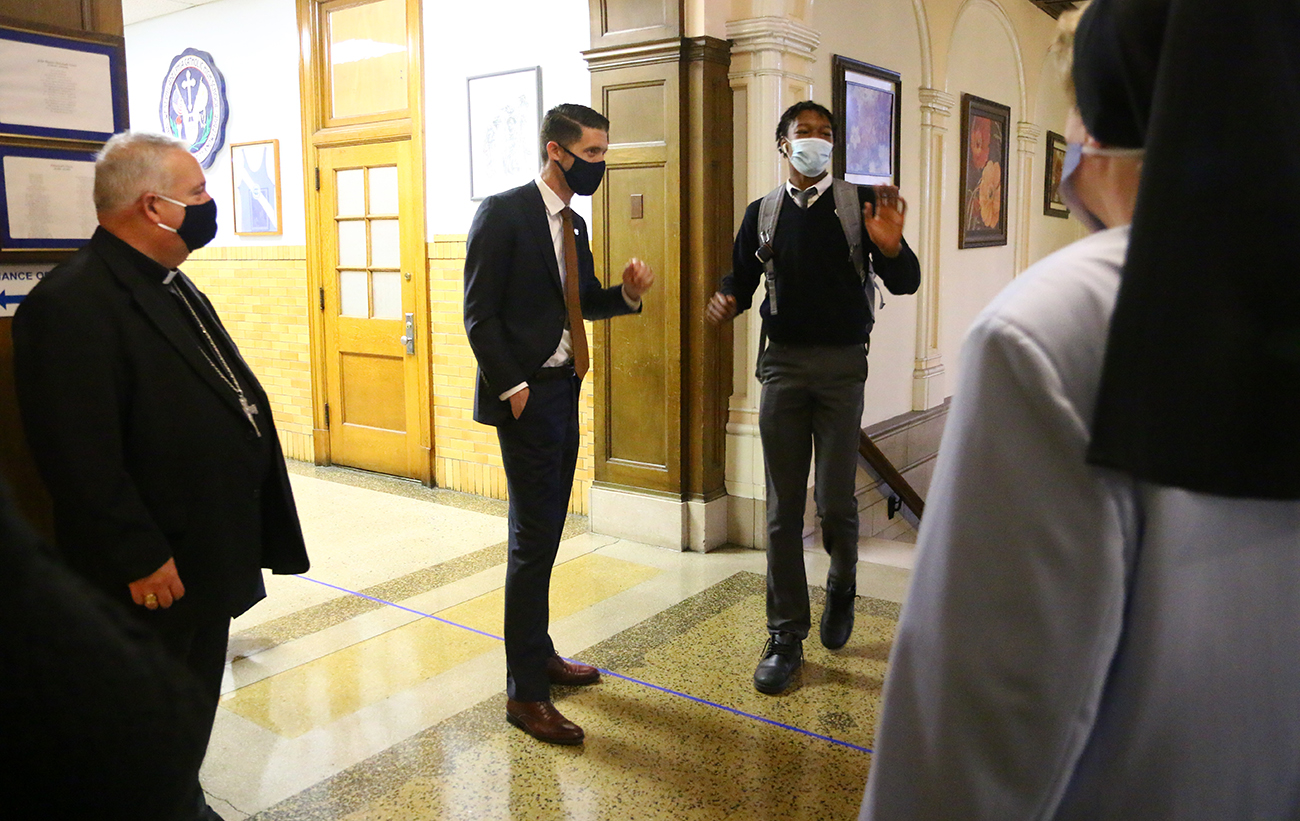 A student entering West Catholic on the first day back to school Sept. 10, 2020 greets the school’s president, Andrew Brady (center left), along with Archbishop Nelson Pérez (left) and Immaculate Heart Sister Maureen McDermott (right), former superintendent of secondary schools for the archdiocesan Office of Catholic Education. A $2.7 million planned endowment from 1965 alumnus Bernie Rondolone, announced in November 2021, will cover tuition for some 25 to 30 students in coming years. (Sarah Webb)

An archdiocesan Catholic school alumnus is making sure students from “his old neighborhood” will have the same educational opportunity he enjoyed decades ago.

The bequest will finance The Nicholas and Mary Rondolone Endowed Scholarship Fund, named in honor of Rondolone’s parents and family.

Upon the fund’s launch, the four-year scholarships will be awarded based on both academic criteria and financial need, said West Catholic president Andrew Brady, a 2002 graduate.

Given current market rates, Brady estimates the endowment will give between 25 and 30 teens to opportunity to attend West Catholic without cost, boosting the school’s in-demand tuition assistance resources.

Currently, West Catholic “awards about $2 million in financial aid and scholarships” each year, said Brady, adding that amount only partially covers the “tons of people” seeking to send their children to the school.

“Our challenge here isn’t interest; it’s affordability,” he said. “We have hundreds of applications every year, with families saying, ‘We know West Catholic is the right place for our kid.’”

Now co-educational, the school has enjoyed a rich history as a West Philadelphia fixture. In 1916, West Philadelphia Catholic High School for Boys opened its doors to students at both Transfiguration Parish School and later at St. Gregory Parish School. Its counterpart, founded in 1927, was the second all-girls Catholic high school in Philadelphia. In 1989, the two institutions merged to form the current school, located at 4501 Chestnut Street.

For Rondolone, the presence of the religious orders was formative.

“The Christian brothers and the nuns instilled in me a desire to serve,” he said. “I am … very grateful to the Lasallian order of Christian Brothers for their selfless dedication in enabling me and generations of students from various backgrounds to receive an education to be proud of.”

Brady said the Rondolone scholarships will meet a critical neighborhood need. According to the 2019 American Community Survey, the median income in West Philadelphia was just under $35,000, an amount that places West Catholic’s annual tuition of $9,400 out of reach for many prospective students.

“We have people who just can’t afford the amount they’re being asked to pay,” said Brady.

Rondolone’s gift will help change that, he added.

“I’ve been a part of some (financial aid award) calls,” he said. “Families cry on the other end of the phone, when they know their kid will be able to attend a Catholic school that’s high-performing and safe.”