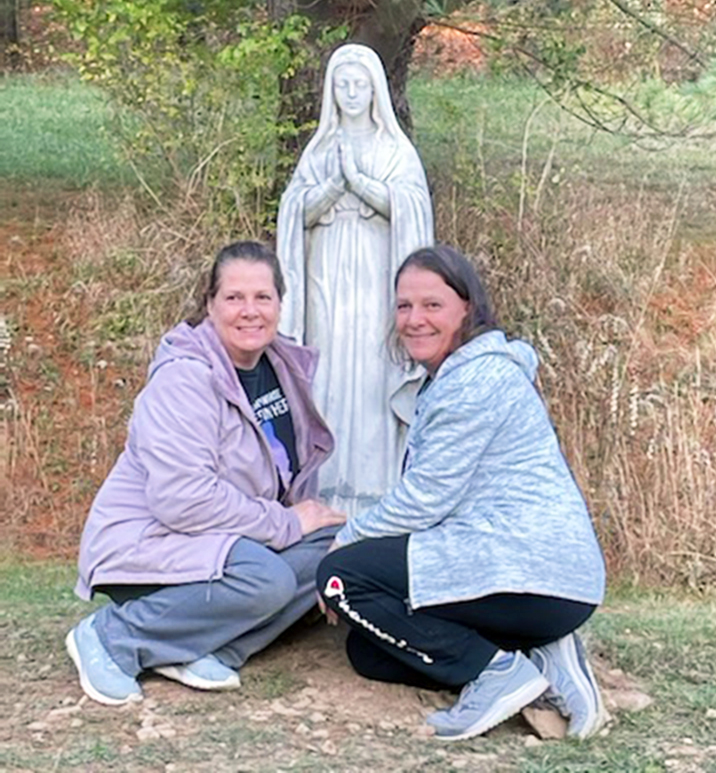 In July 2021, twin sisters Andrea DiNunzio (left) and Angela Wood (right), along with their husbands, rescued and restored a discarded statue of Mary from the former St. Cyril of Alexandria Parish and School in East Lansdowne. The figure has since been installed at the family’s mountain home in upstate Pennsylvania. (Photo courtesy of Jim Wood)

A beloved statue of Mary has been rescued from the rubble and installed atop a Pennsylvania mountain, thanks to the devotion – and hard work — of a local family.

Back in late July, twin sisters Angela Wood and Andrea DiNunzio found the four-foot concrete image broken in two at their childhood school and parish, the former St. Cyril of Alexandria in East Lansdowne.

The damage had occurred as a construction crew was refurbishing the St. Cyril buildings – shuttered when the parish merged eight years ago with nearby St. Philomena — for their new owner, Vision Academy Charter School. The former parish’s grade school, now SS. Cyril and Philomena Independence Mission School, is located adjacent to St. Philomena Church in Lansdowne.

Last December, the Philadelphia Archdiocese formally relegated St. Cyril Church, which had been a worship site since the 2013 merger, to “profane but not sordid use,” and subsequently put the parish buildings up for sale.

With the new owners preparing to renovate before the 2021-22 academic year, word had inaccurately spread on social media the church and school were slated for total demolition — prompting Wood, DiNunzio and other alumni and parishioners to return July 29 for a farewell visit.

For Wood, seeing the shattered statue of Mary was particularly distressing, since she had regularly prayed before it to counter the anxiety she’d often felt while in school.

“I was having flashbacks of me just looking up at her and begging her for help,” said Wood. “I would go right up to her and pray my little heart out. I would say, ‘Listen, I need to feel calm here.’ And it worked. With each year, I felt stronger and better.”

She and her sister were determined to save the image, and they knew just who to call for help: their husbands.

Wood’s spouse Jim, a Montgomery County detective, was equally committed to the task, but admitted it seemed an “impossible” one, since the statue weighed an estimated 800 to 900 pounds.

“I was thinking, ‘I don’t know if I can get Mary into my car; the statue is so heavy and there are not a lot of people here who can help,” he said. “But I backed my car into the parking lot and opened the hatch. I decided I wasn’t leaving without her.” 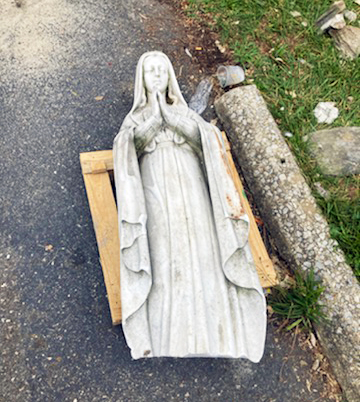 A statue of Mary at the former St. Cyril of Alexandria in East Lansdowne was accidentally damaged during July 2021 renovations undertaken by the parish buildings’ new owner, an area charter school. (Photo courtesy of Jim Wood)

Providentially, the construction crew’s leader — who happened to be Muslim — and a fellow laborer assisted in loading the two pieces into Wood’s vehicle.

“I knew right then and there this was going to be a moment that would last forever, just because of how everything was falling into place,” said Wood.

But when he thanked the workers and tried to describe Mary’s significance for Catholics, the veteran detective was even more surprised.

“I told them, ‘Your blessings are going to be so great for helping Mary,” said Wood. “And they said, ‘You don’t have to explain. Just because we’re Muslims doesn’t mean we don’t know about Mary. We love her.’”

While the Islamic faith does not regard her as the Mother of God, the Quran includes 34 verses about Mary, describing her presentation in the Temple at Jerusalem, her purification, the angelic Annunciation, her virginal conception of Jesus and the Nativity. Such esteem led Cardinal William Keeler of Baltimore to point out in a 1995 address to the American Muslim Council that Mary holds Christians and Muslims “forever in conversation with one another.”

“That shocked the heck out of me,” Wood said. “This person that was talking about Mary understood our compassion and love for her. It was great.”

With the statue’s pieces loaded, the Woods headed back to their Philadelphia-area home, not entirely certain how they would actually repair the figure.

“I leaned her up against a tree, and our initial plan was to drill holes in the pieces and use rebar (reinforcing bar) to reconnect them,” said Jim. “But my son-in-law Mike said glue would work, and that’s ultimately what he and my son Jimmy used. They lifted her up, applied the glue and put her back together.”

Mary “convalesced” in the Woods’ backyard while the adhesive cured, and a few weeks ago, the family relocated her — now in one piece — to their mountain home in upstate Pennsylvania.

Angela Wood said Andrea’s husband Paul DiNunzio deserves “a lot of credit” for “placing (Mary) so perfectly” on the property, within view of passing motorists on the rural road.

“The sight of her will inspire others,” said Jim Wood. “When people drive by, they’re going to be thinking, ‘Is that an apparition?’ Some are going to be freaked out in a good way.”

The Woods’ brother-in-law Brian Master also rolled up his sleeves to aid in positioning the statue, which Angela and Andrea plan to resurface and paint in the spring.

“She’ll have a crown on her head,” said Angela, noting several St. Cyril alumni have already asked for pictures of the restored figure, which a priest from one of the nearby parishes will bless.

In her new home, Mary “will have her hands full” with the men of the family during hunting season, “especially the way Jim rides his four-wheelers,” said Angela.

Above all, she said, the rescued statue of Mary provides “a feeling of comfort.”

“She looks beautiful, standing up very proudly overlooking the mountains,” Angela said. “You can see her little hands praying, and you know she is right there. I feel she’s watching over us.” 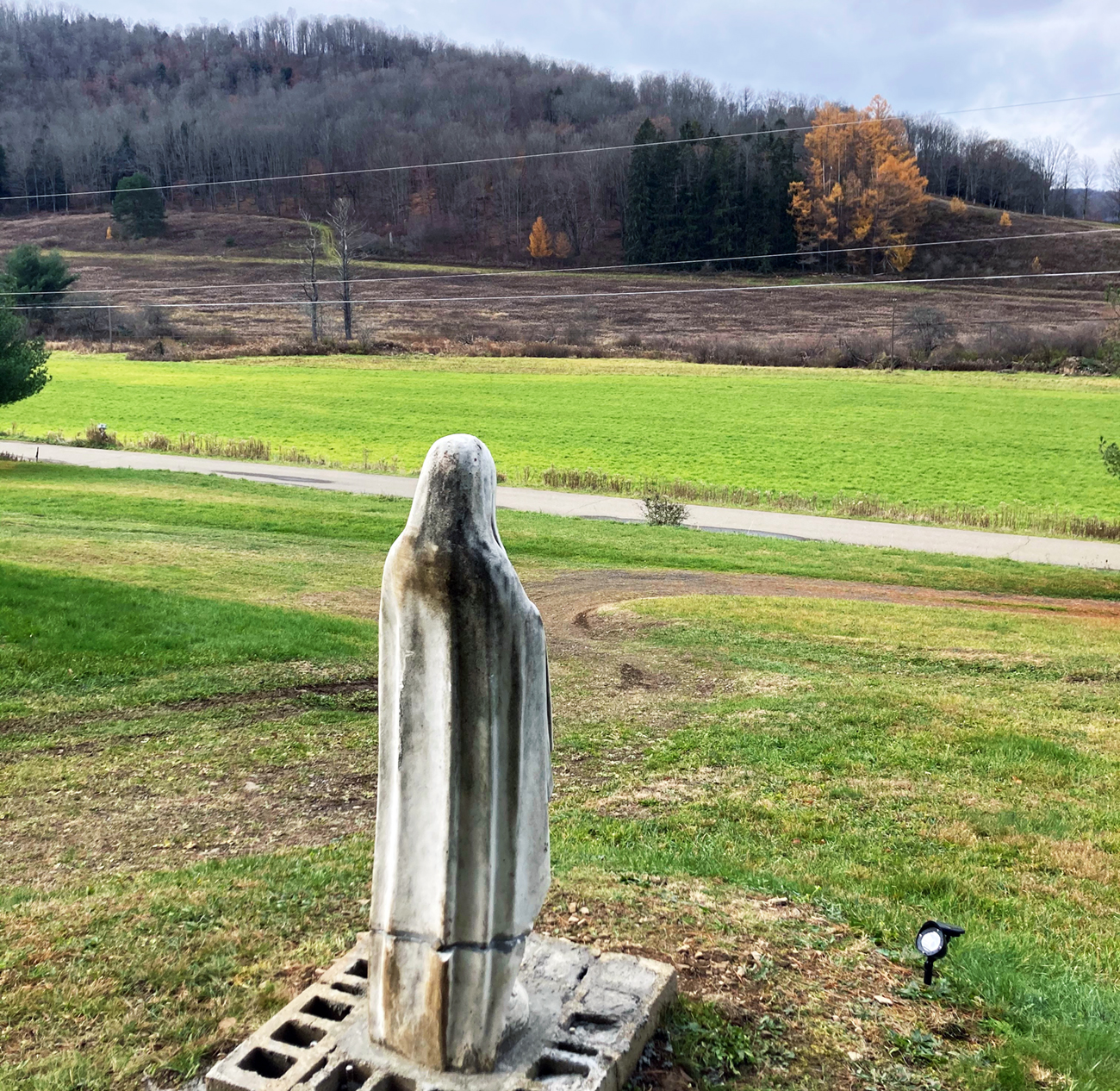 In this November 2021 image, a discarded statue of Mary, rescued from the former St. Cyril of Alexandria Parish in East Lansdowne, gazes across the mountains of northern Pennsylvania. (Photo courtesy of Jim Wood)

PREVIOUS: During Advent and every Sunday, ‘nothing compares’ to attending Mass

NEXT: Montco parish offers talks on Christian response to addiction