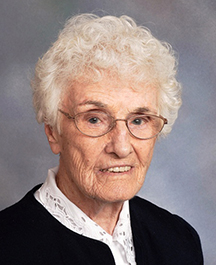 She was the daughter of Earl and Frances (Coll) Hutchinson of St. Andrew Parish in Newtown. She attended the parish grade school and Newtown High School from which she graduated in 1941.

She entered the Sisters, Servants of the Immaculate Heart of Mary and received her habit and religious name, Sister Agnes Cecilia, in 1946. She pronounced her first vows in 1948.

She would go on to earn a degree from Immaculata College.

Sister Claire taught music to children in grades one and two from 1948 to 1964 at St. Ignatius School in Centralia, St. Frances Cabrini in Fairless Hills and St. John of the Cross in Roslyn.

Sister Claire’s last teaching assignment was at St. Matthew School in Philadelphia where she spent the next 22 years until 2011.

After 63 years in the classroom, Sister Claire continued rendering service and prayer at Camilla Hall until her death.

She is survived by sisters Marie Hutchinson, Ann Hendricks (Ross), Ginny Carver, nieces, nephews, grandnieces and grandnephews and her I.H.M. community. She is predeceased by her parents, her sister Jane Fitzpatrick (Jack) and her brother-in-law Frank Carver.