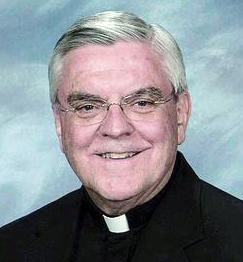 Father Richard J. McAndrews, a priest of the Archdiocese of Philadelphia and pastor emeritus of Epiphany of Our Lord Parish in Plymouth Meeting, died Nov. 18. He was 80.

He was ordained on May 20, 1967 at the Cathedral of SS. Peter and Paul, Philadelphia by Archbishop John J. Krol.

Father McAndrews served as parochial vicar at Epiphany of Our Lord Parish, Plymouth Meeting; SS. Peter and Paul Parish, West Chester; St. Monica Parish, Philadelphia; and Blessed Virgin Mary Parish, Darby. He was on the faculty at Cardinal Dougherty High School, and also served as assistant to the Secretary for Clergy.

In 1995 he was appointed pastor of Nativity B.V.M. Parish in Philadelphia, and in 2002 pastor of Epiphany of Our Lord, Plymouth Meeting, becoming pastor emeritus there in 2009.

He also served as senior priest at Corpus Christi Parish, Lansdale and St. Isidore Parish, Quakertown. He retired from active ministry in June 2016.

Interment was at SS. Peter and Paul Cemetery in Springfield.