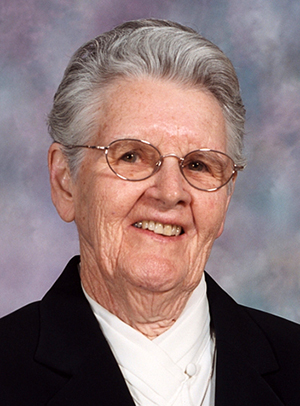 Sister Elizabeth Frances Scully, O.S.F. (formerly Sister Anthony Brendan), 97, died Nov. 14 in Assisi House, Aston. She had been a professed member of the Sisters of St. Francis of Philadelphia for 76 years.

She was born in Windsor, Vermont, but later moved to Ireland, where she graduated from Presentation Convent High School in Youghal, County Cork. She entered the congregation in 1942 and professed her first vows in 1945.

Sister Elizabeth earned a BA in English from Villanova University, an MA in religious education from Loyola Marymount College in Los Angeles and an MA in classical Latin from Reed College in Portland. She ministered primarily in elementary and secondary education and parish ministry.

Sister Elizabeth began her ministry in education in the Archdiocese of Philadelphia, teaching for one semester at SS. Peter and Paul School in Lehighton and then at All Saints School in Philadelphia. She later returned to the archdiocese working as a volunteer in the congregation’s Office of Corporate Social Responsibility for five years and in spiritual direction at the Franciscan Spiritual Center in Aston.

She also served in the Archdiocese of Baltimore and for many years in dioceses in California, Washington and Oregon.

In 2016 she moved to Assisi House in Aston, where she served in prayer and hospitality ministry until her death.

The funeral Mass was celebrated Nov. 18 in Assisi House. Burial followed in Our Lady of Angels Cemetery in Aston.

Sister Elizabeth is survived by her sister, Sister Olivia Scully, P.B.V.M.; her brother, David Scully; nieces, nephews and by her Franciscan family.