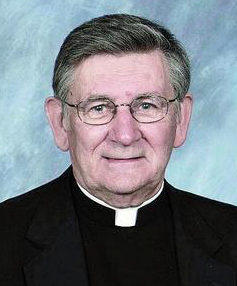 Msgr. Breslin was ordained on May 13, 1961 at the Cathedral of SS. Peter and Paul, Philadelphia by Archbishop John Krol. He was named an honorary prelate of St. John Paul II in 1985.

He served as pastor of St. Christopher Parish, Philadelphia, and Our Lady of Mount Carmel Parish, Doylestown.

He retired from active ministry in 2008.

The Reception of the Body will be held at St. Albert the Great Church, Huntingdon Valley
on Friday, Nov. 19 at 9:45 a.m., followed by a viewing.

The funeral Mass will be celebrated by Bishop Timothy C. Senior at 11 a.m. Concelebrating priests will include Msgr. Joseph P. Duncan, Msgr. Daniel J. Sullivan and Msgr. Michael J. Carroll, who will be the homilist.

Msgr. Breslin is survived by his brothers Gerard and Leo, and several nieces and nephews.