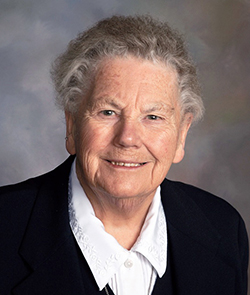 Sister Marita Donald Toland, I.H.M., died Nov. 5 in Camilla Hall, Immaculata. She was 87, and in the 70th year of her religious life.

Mary Patricia Toland was the daughter of parents Donald Joseph and Mary Elizabeth (Ford) Toland. She and her brother Donald grew up in Most Blessed Sacrament Parish in Philadelphia.

After attending the parish school and West Catholic Girls’ High School from which she graduated in 1951, she joined the Sisters, Servants of the Immaculate Heart of Mary in 1952. That year she received her habit and took the religious name, Sister Marita Donald.

She pronounced her first vows in 1954. She would go on to earn degrees in math from Immaculata College and Villanova University.

From 1994 to 2004, Sister Marita was the computer resource person at St. Charles Borromeo School in Bensalem. She then served at Holy Family Elementary School in the Harrisburg Diocese.

She also served at St. Rose of Lima School and St. Matthew School to 2018, when she entered the Apostolate of Prayer at Camilla Hall until her death.

Sister Marita is predeceased by her parents and her brother. In addition to her I.H.M. community, she is survived by her nieces, nephews, grandnieces and grandnephews.