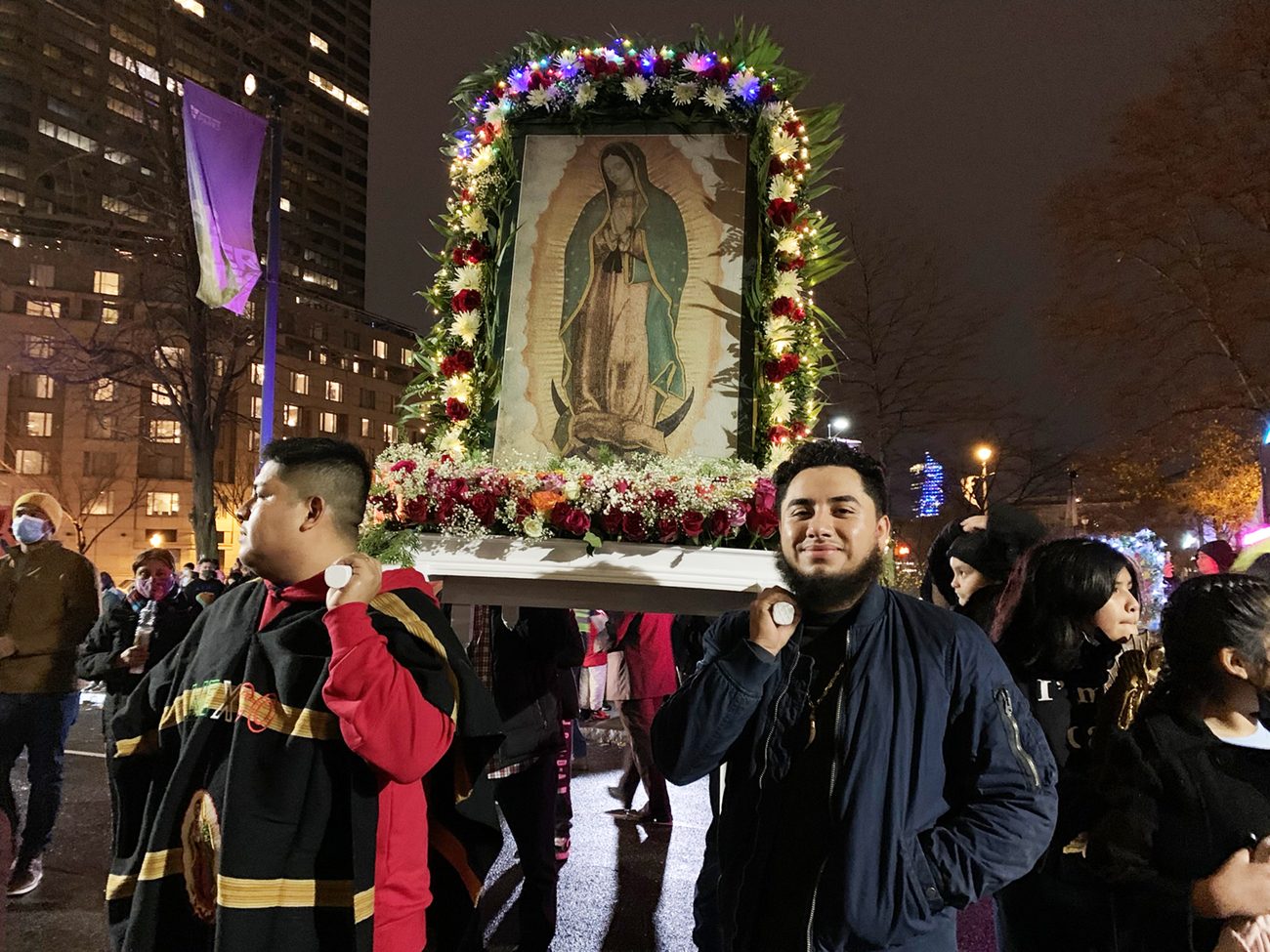 Pilgrims carry an image of Our Lady of Guadalupe to the Cathedral Basilica of SS. Peter and Paul for a Dec. 11 Mass honoring the patroness of Mexico and the Americas.

Hundreds of area faithful recently gathered to honor an apparition of Mary that has been what Archbishop Nelson Pérez called “a great gift” to the Americas and to the world.

Some 1,200 filled the Cathedral Basilica of SS. Peter and Paul Dec. 11 for the Archdiocese of Philadelphia’s annual Mass commemorating Our Lady of Guadalupe. Archbishop Pérez was the principal celebrant and homilist for the liturgy, which marked a 16th-century vision of Mary in what is now Mexico City.

(View a photo gallery from the Dec. 11 Mass in honor of Our Lady of Guadalupe.)

Concelebrating the two-hour Mass were several archdiocesan priests in the Hispanic Apostolate. Liturgical music was provided by the Hispanic Choir of Philadelphia and its orchestra, under the direction of composer Damaris Thillet.

Many on hand had walked several miles to the Cathedral — even amid intermittent rain — as part of the Peregrinación Guadalupana, a pre-Mass procession that wound through several neighborhoods in North and South Philadelphia. Participants from various parishes bore images of Our Lady of Guadalupe while reciting the rosary, singing hymns and traditional music, and in some cases wearing native attire.

After a scaled-down version last year due to COVID, the Dec. 11 event marked a return to the typically lavish observances of the Guadalupe tradition throughout the archdiocese, the U.S. and the Americas – a welcome and needed change, said Kathia Arango, director of the archdiocesan Office for Hispanic Catholics.

“I think it’s time for the community to be back,” she said. “And I believe it’s the right time … because I think we are losing the sense of community with the pandemic.”

Pilgrims converged at the steps of the Cathedral for festive dances prior to the start of the 9 p.m. liturgy, and inside a number of attendees placed statues and portraits of Our Lady of Guadalupe before the altar rail for blessing by the archbishop.

“The Virgin (of Guadalupe) is my mother,” said Pedro Magallon, a member of St. Veronica Parish. “She is the Mother of Jesus Christ, and she is the Virgin of Mexico.”

‘Etched’ into their hearts

Like a number of attendees, Magallon — who said his family is “100% Mexican” — wore a woven poncho with the image of Our Lady of Guadalupe, evoking the tilma, or cactus-fiber cloak, of St. Juan Diego, the Indigenous Chichimeca peasant and Christian convert to whom Mary appeared in 1531. Manifesting herself as a mestiza, with Indigenous and European features, and speaking in the Nahuatl language, she said she was “the one who crushes the serpent” – a phrase that Spanish missionary friars translated as “Guadalupe.” 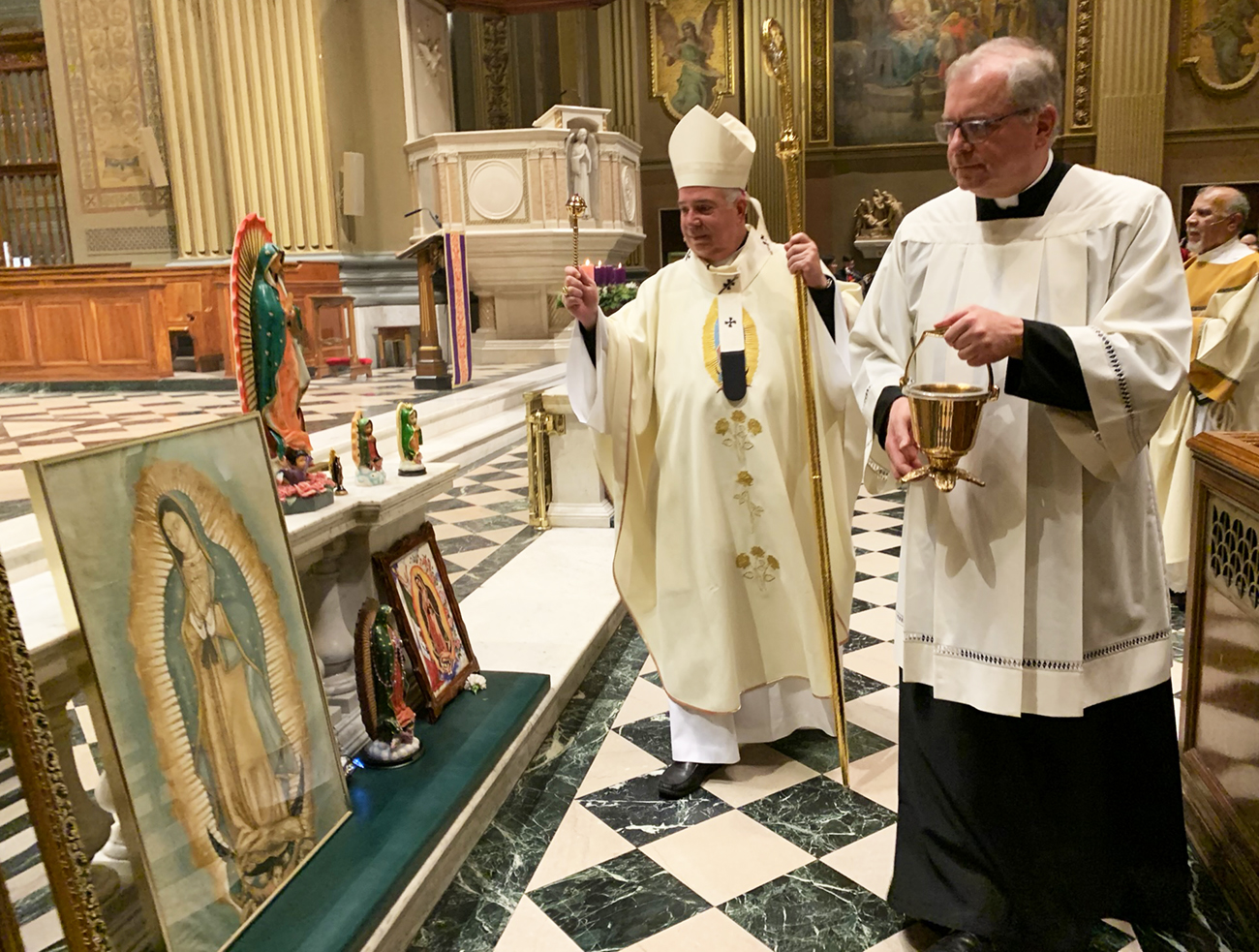 Archbishop Nelson Pérez, assisted by Father Dennis Gill (right), blesses images of Our Lady of Guadalupe brought by faithful to a Dec. 11 Mass at the Cathedral Basilica of SS. Peter and Paul. (Gina Christian)

When the local bishop demanded a sign of the vision’s authenticity, Mary provided Diego with several blooming roses, which he carried in his tilma. As Diego opened its folds to present the flowers to the bishop, Mary’s image was found mysteriously impressed upon the fabric.

Speaking in Spanish, Archbishop Pérez noted he had “the blessing of visiting (that) basilica on several occasions,” and found himself profoundly moved each time. 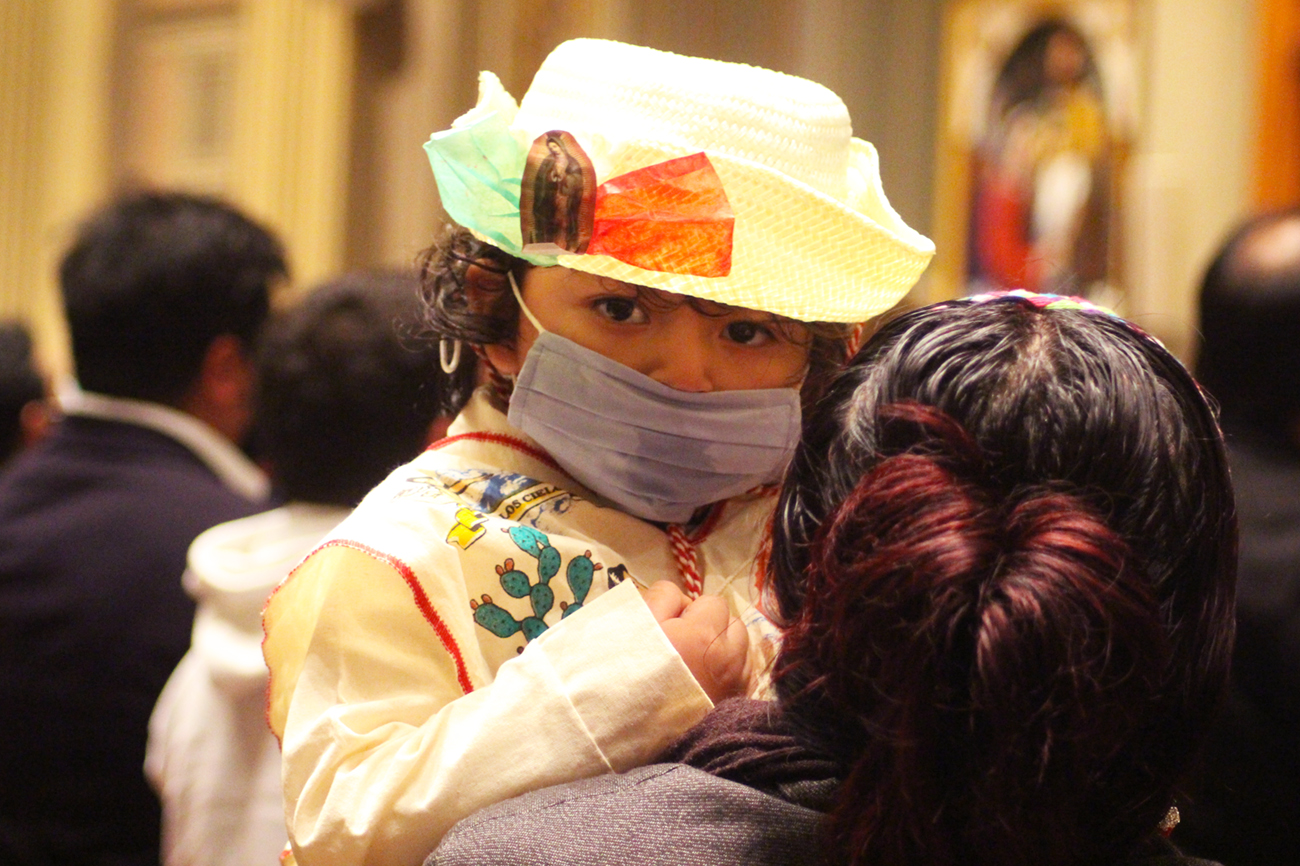 A number of parents dressed their children as St. Juan Diego, to whom Mary appeared in 1531, for a Dec. 11 Mass in honor of Our Lady of Guadalupe at the Cathedral Basilica of SS. Peter and Paul. (Gina Christian)

Just as the apparition’s image was imprinted on St. Juan Diego’s tilma, Our Lady of Guadalupe has been “etched” into the hearts of Mexican people worldwide, he said, joking that “there isn’t a taquería in Philadelphia where I don’t find tacos and the Virgin.”

Those of Mexican heritage can rightly take pride in the Guadalupe apparitions, said the archbishop, adding the comfort and assurance the Virgin offers have been more needed than ever — especially as Latino immigrants have faced innumerable obstacles in “sacrificially” seeking “a better life for their children and grandchildren.”

Archbishop Pérez drew applause when he added: “I, in the name of this country, would like to ask your pardon for this lack of charity and this lack of dignity. … You deserve much, much more.”

‘For the whole world’

The archbishop urged those of Mexican heritage, as well as all Latinos, to cherish their cultural values, such as a deep love of family, vibrant faith and a fervent devotion to the Catholic Church and to Mary.

He exhorted the youth present to “be grateful for the sacrifices” their parents and grandparents had made to come to the U.S., and to “live the values they have instilled.”

At the same time, said the archbishop, “the Virgin of Guadalupe isn’t only for those who are Mexican, but for the whole world.”

In life’s journeys, he said, “know that you do not walk alone. You do not struggle alone. You struggle and walk with the little Virgin, Our Lady of Guadalupe.”

PREVIOUS: Priest’s ‘yes’ to God changed his life, for good of his parishioners

NEXT: Catholic ministries, schools ‘meet kids where they are’ amid mental health crisis