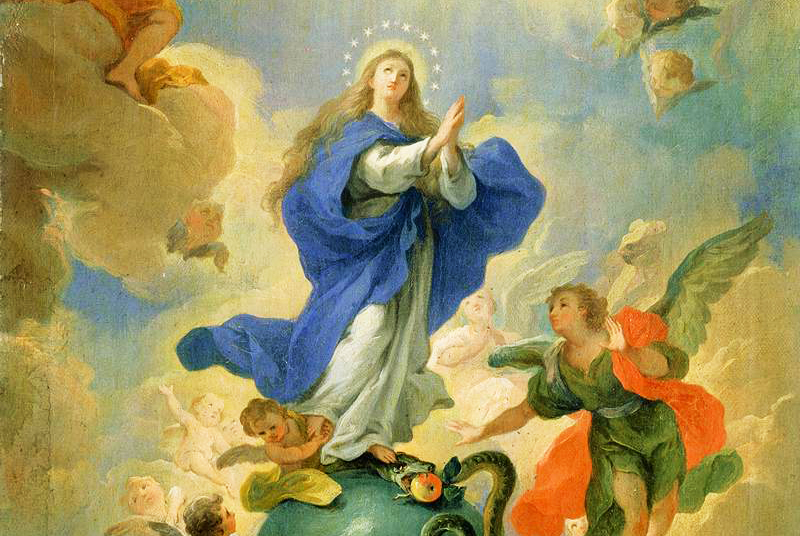 Mary’s Immaculate Conception ultimately points to Christ, while preparing faithful to receive him in their hearts, said Father Dennis Gill, director of the archdiocesan Office for Divine Worship.

The Dec. 8 solemnity, a holy day of obligation, commemorates Mary’s preservation from original sin from the moment she was conceived.

That mystery, which faithful have honored in some form from at least the seventh century, was officially proclaimed as doctrine by Pope Pius IX in his 1854 apostolic constitution Ineffabilis Deus.

Over the years, the dogma has been a point of contention among Catholic, Protestant and Orthodox Christians – and Catholics themselves often struggle with it, said Father Gill.

“Many Catholics think that the Immaculate Conception is a reference to Christ’s conception in the womb of Mary,” he said.

Instead, “the Immaculate Conception is a sign of God’s favor to Mary, who would be the Mother of his divine Son,” said Father Gill.

Yet the actual logic by which Mary could remain free of sin from her conception had long stumped even the best theologians, among them St. Augustine, St. Bernard, St. Anselm, St. Thomas Aquinas and St. Bonaventure.

Thirteenth century Franciscans William of Ware and Blessed John Duns Scotus were instrumental in resolving these difficulties, with Duns Scotus (nicknamed the “Subtle Doctor”) affirming that “God could have conferred as much grace on (Mary) in the first moment of her soul’s existence as he does on another soul at … baptism.”

Duns Scotus explained Mary had been divinely preserved from original sin based on the anticipated merits of Christ’s suffering and death. As a result, her Immaculate Conception showed Christ had exercised “a most perfect act of mediation” that in fact “absolutely indebted” Mary to Christ.

“The very death and resurrection of Christ … a divine and eternal event, reaches back in time and frees Mary from original sin at the moment of her conception,” said Father Gill.

For that reason, he added, “to better appreciate the Immaculate Conception is to better grasp the paschal mystery of Christ.”

Following the Franciscans’ thirteenth-century theological breakthrough, belief in and celebration of the Immaculate Conception gained widespread traction throughout Europe. Almost a quarter century before Pope Pius IX’s declaration, St. Catherine Labouré, a French religious, witnessed several apparitions of Mary that affirmed the doctrine of the Immaculate Conception. These manifestations revealed the design of the Miraculous Medal, which includes the prayer, “O Mary, conceived without sin, pray for us who have recourse to thee.”

Mary is “intimately associated with God’s plan for all of us,” said Father Gill, and she is a sure guide through the Advent season.

“The Immaculate Conception points to Christ—and the preparation of her womb for her Son—and what Christ does for his Mother,” he said. “In the same way, we are inspired to do the same with our hearts, to make them a worthy dwelling for Christ with an understanding of all that Christ will do for us.”