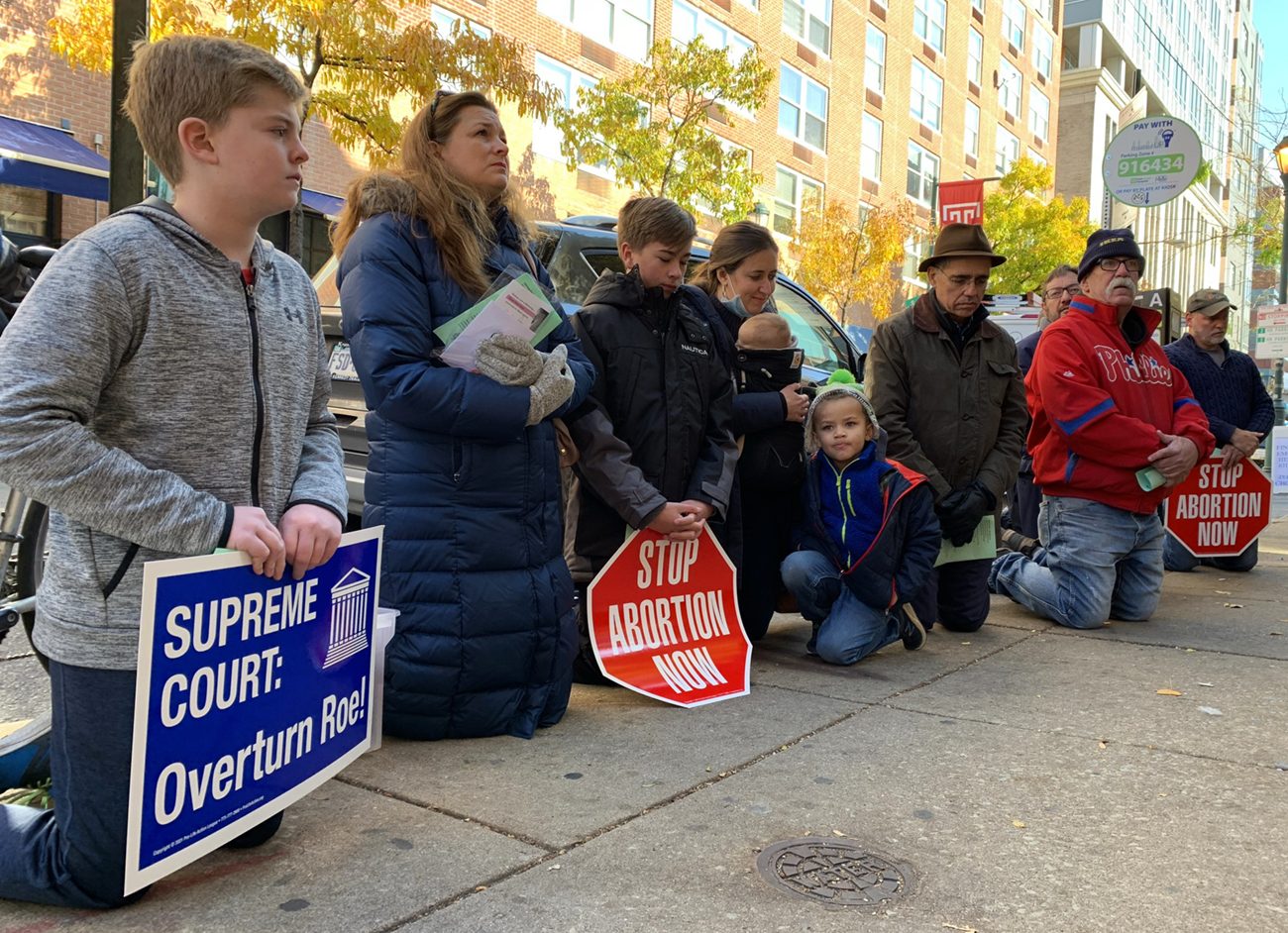 Pro-life advocate Ashley Garecht (second left) joined some 30 others at a Dec. 1, 2021 prayer vigil outside a Philadelphia Planned Parenthood site, an event organized by the Pro-Life Union of Greater Philadelphia as the Supreme Court considers a case that could overturn its 1973 Roe v. Wade decision on abortion. (Gina Christian)

The case represents an appeal by the State of Mississippi after its Gestational Age Act, a ban on most abortions after 15 weeks of pregnancy, was struck down by a federal District Court in 2018. The law has been challenged by Mississippi’s only abortion facility, while lead plaintiff and state health officer Dr. Thomas Dobbs III is petitioning the court to uphold the ban.

With a ruling expected by July 2022, the case stands to overturn Roe v. Wade — the 1973 Supreme Court decision that legalized abortion in the U.S. – by redirecting the abortion issue to the state level for legislation.

“We all know what’s happening today,” said PLU board member Patrick Stanton. “We don’t know the outcome, but what pro-lifers do, and what Christians do, is take it to the Lord.”

Ahead of Wednesday’s Supreme Court session, Baltimore Archbishop William E. Lori, chairman of the U.S. bishops’ pro-life committee, had invited “all people of goodwill to uphold the dignity of human life by joining us in prayer and fasting for this important case.”

The archbishop noted that in the U.S., “abortion takes the lives of over 600,000 babies every year,” adding “Dobbs v. Jackson Women’s Health could change that.” 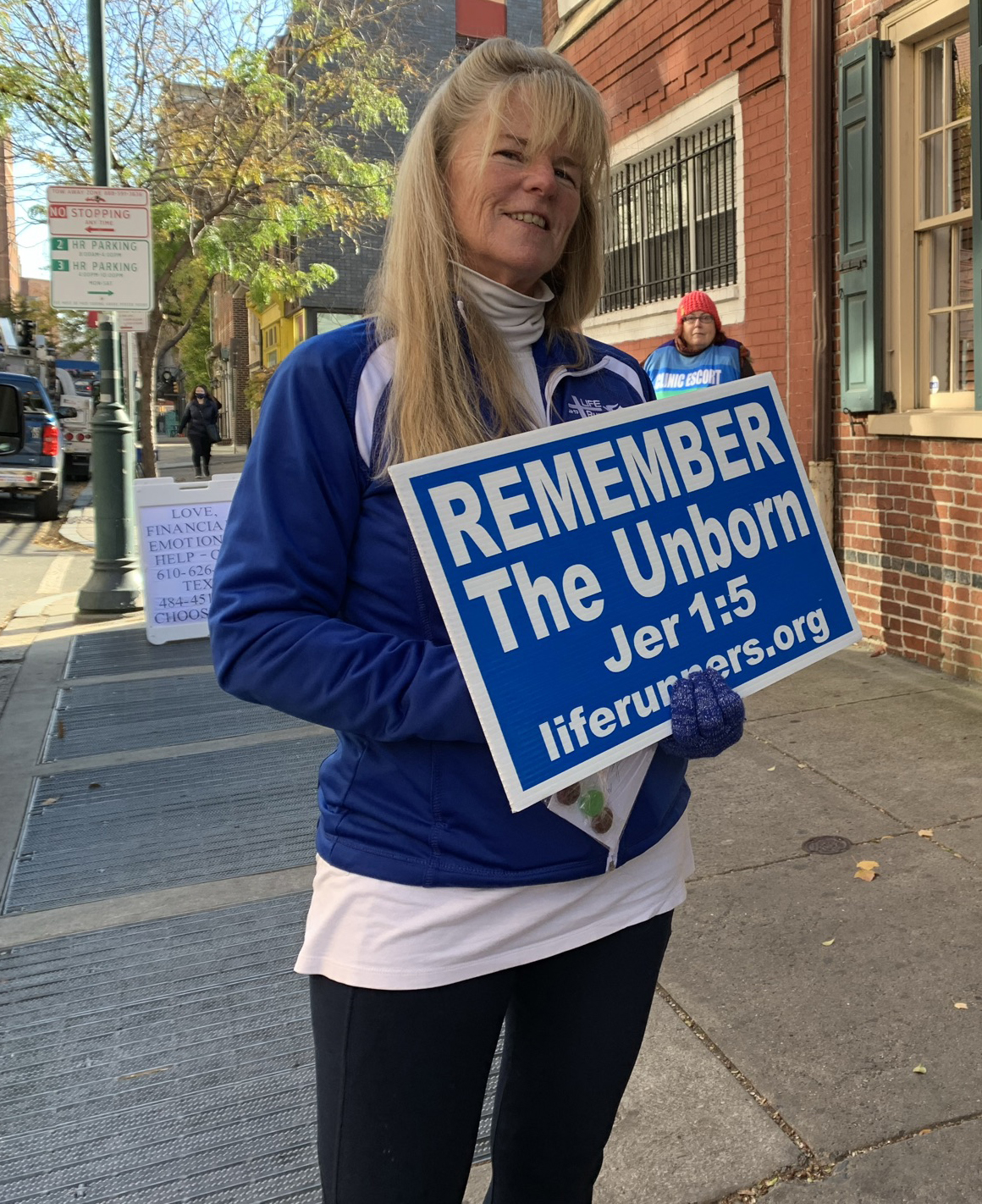 Deb Mirenda of the Philadelphia-area Life Runners chapter displays a sign during a Dec. 1 pro-life prayer vigil outside a Philadelphia abortion clinic, an event scheduled to coincide with oral arguments in a Supreme Court case that could overturn Roe v. Wade. (Gina Christian)

Stanton said moments before Wednesday’s vigil, he encountered a Hispanic woman whom he had assisted during a crisis pregnancy years earlier at the same Planned Parenthood location.

“She didn’t speak a word of English, but (my) daughter spoke to her in Spanish, and she decided to have the baby,” he said. “The baby is 17 now and in high school. … This is a beautiful sign from God.”

Although hopeful about the court’s ruling on Dobbs, vigil participants said they ultimately sought more than judicial and legislative shifts regarding abortion. 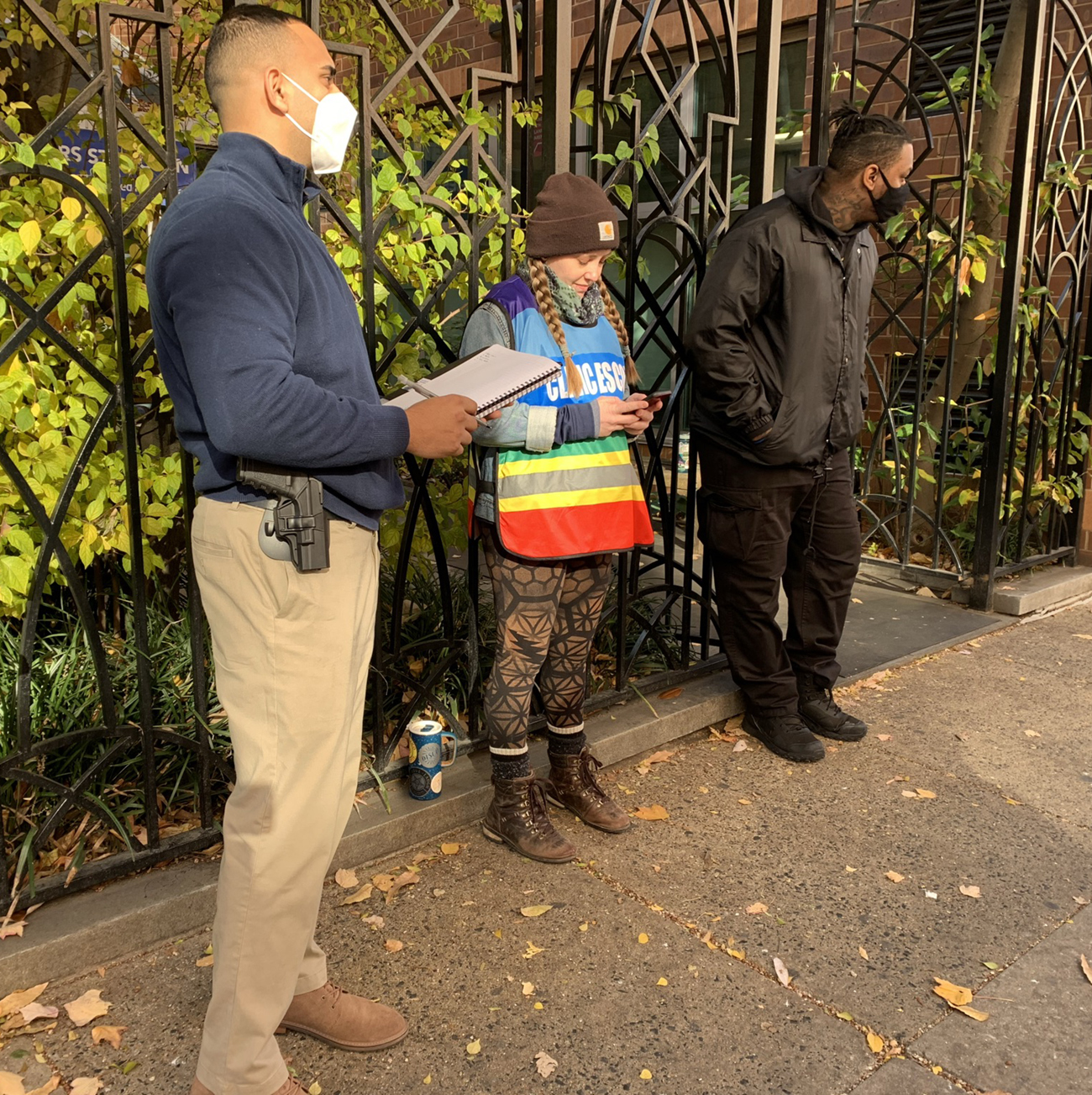 An unidentified man with a handgun (left) takes notes on participants in a Dec. 1 prayer vigil held outside a downtown Philadelphia Planned Parenthood clinic. The individual, who confirmed to CatholicPhilly.com he was not affiliated with Philadelphia Police Department officers on hand, spoke only to Planned Parenthood staff and associates. (Gina Christian)

“We pray for the Holy Spirit’s grace to move hearts and minds to … treasure all human life form beginning to end,” said Dominican Father Hycanith Cordell, pastor of St. Patrick Parish in Philadelphia.

“We’re not just desiring an overturning of this decision,” he prayed. “We know that’s one step, (but) we are asking for you, (Lord), to create in us a passion for those made in your image and likeness at every point and every stage.”

Pastor Bill Devlin, CEO of Extreme Faith, pointed to his longtime work in a number of impoverished nations to show “pro-abortion and Planned Parenthood workers” the pro-life movement’s commitment to human dignity at all ages.

He also commended the Catholic Church for “carrying the weight of the needs of the world.”

“Every country I’m in, whether it’s Afghanistan or Syria or Jordan … the Catholic Church is always leading the way,” he said.

That leadership necessarily entails suffering, said several vigil attendees, who were taunted at various points with profanities and, in one case, a possible threat of physical harm from a man accompanying a woman into the Planned Parenthood building.

In what event organizers described as a first, Planned Parenthood appeared to have retained an armed individual whose holstered gun was in view throughout the gathering as he took notes and photographed a number of those present.

When questioned by CatholicPhilly.com, the man – who spoke only with Planned Parenthood staff and associates — confirmed he was not part of the Philadelphia Police Department’s civil affairs detail assigned to the event (a standard city practice for public demonstrations), and refused to give further information regarding his role due to what he termed “a policy of non-engagement.”

Multiple calls and email inquiries made by CatholicPhilly.com to both Planned Parenthood’s Southeastern Pennsylvania and national media relations offices for clarification of the armed individual’s presence have not been returned.

Yet amid heckling and intimidation, vigil attendees stressed the need for prayer, fasting and a willingness to rejoice amid the inevitable rejection pro-life advocacy incurs.

“I’ve been spit on, I’ve been cursed at, I’ve been mocked, I’ve been pushed, I’ve been shoved, I’ve been knocked over,” said Mark Houck, co-founder and president of the King’s Men, an international lay men’s apostolate. “I give thanks for it, for the ability to suffer in a small way (for Christ).”

Quoting James 1:2, PLU president and CEO Tom Stevens said he “counts it pure joy when (enduring) trials of every kind,” and encourages pro-life advocates to “unite (their) sufferings to those of Jesus.”

PLU board member Ashley Garecht — whose family was the target of a high-profile harassment incident at the same downtown Planned Parenthood clinic – said pro-life witness is by nature a spiritual battle.

“There’s no glory except through the cross,” she said. “Whatever suffering we experience here, it’s just what we can offer in this fight to protect life.”