Once homeless, choir members share message of hope for those on streets 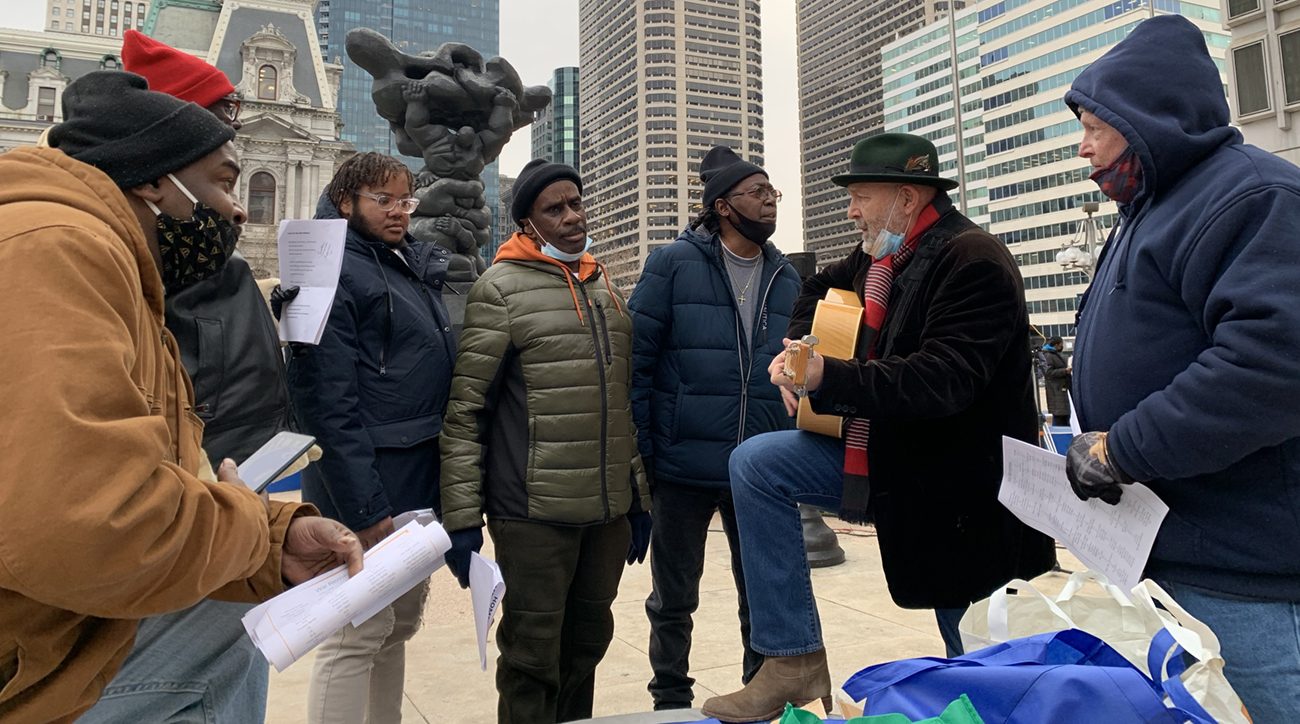 A men’s choir from an archdiocesan homelessness ministry shared its message of solace and hope, as Philadelphia and other U.S. cities remembered those who died without housing over the past year.

Launched in 1990 by the National Coalition for the Homeless and the National Health Care for the Homeless Council, the annual observance – which takes place on the longest night of the year – commemorates those who have perished amid “inhumane and tragic situations, on the streets or in abandoned houses,” said event host Evan Figueroa Vargas, a mental health and recovery advocate.

Part of archdiocesan Catholic Social Services (CSS), the Center City-based SJH works to counter homelessness by providing more than 300 meals each weekday to its residential and day guests, as well as case management, on-site nursing, daily showers and a mail room. In addition, the facility annually shelters some 250 men as they seek to obtain housing.

Wednesday’s candlelight vigil included two songs by the Good Shepherd Singers – Bill Withers’ “Lean On Me” and the folk-gospel anthem “This Little Light of Mine” – as well as personal testimonials, poetry and a reading of the names of more than 400 who died while homeless in Philadelphia over the past year.

For Jerry, a member of the Good Shepherd Singers, that roster brought back memories.

Through SJH’s Good Shepherd program, Jerry and his fellow singers – most of whom are medically fragile — are working to transition from homelessness to independent living, while addressing their specific health care needs. In fact, said Jerry, he missed last year’s gathering due to a hospital stay. 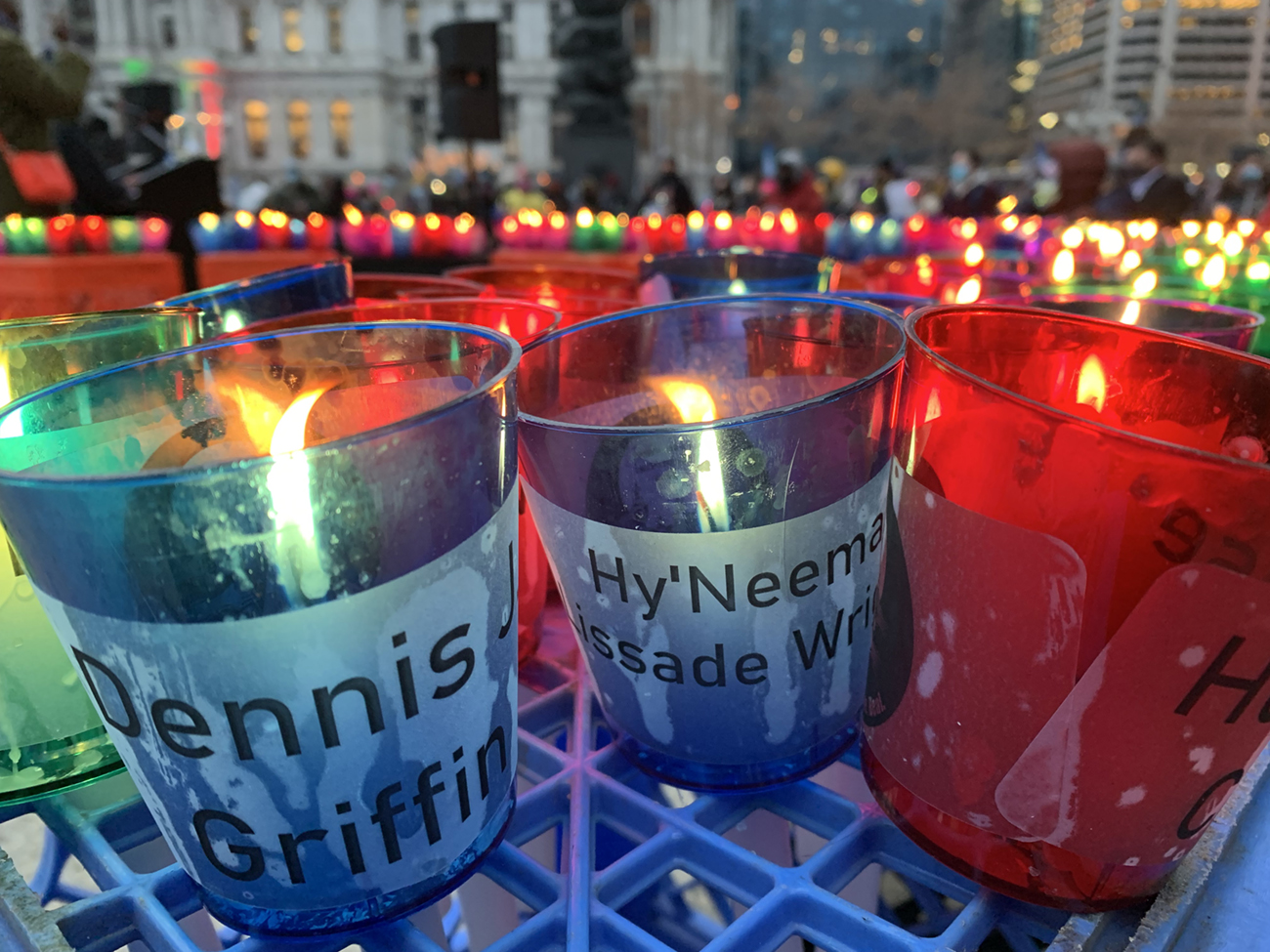 At Philadelphia’s Dec. 21 Homeless Memorial Day vigil, candles were lit in honor of the more than 400 individuals who died while experiencing homelessness in the city over the past year. (Gina Christian)

SJH’s resources – which include weekday meals to hundreds of clients, along with case management, on-site nursing, daily showers and a mail room – provide a path away from the streets, said SJH program director Barry Martin, who heads up the Good Shepherd Singers.

The choir members “showcase the fact that they were able to utilize the program … and survive,” said Martin. “Some people do use the support systems that are available to them; they go to drug and alcohol recovery.”

A number of the Good Shepherd Singers have “years of sobriety right now,” he added. “It’s an affirmation for themselves and others: ‘If I can do it, you can do it.’”

Rehearsals for their performances throughout the year build confidence, literacy and a sense of camaraderie, said Martin.

“A lot of these guys come into it and they really don’t know how to read very well,” he said. “So they get to learn how to read a little bit by going over these words. It’s usually the first experience they have of singing in a choir, and while we’re together … we have so much fun sitting around the kitchen table, just singing and joking and teasing each other.”

The need for places like SJH has increased, said Amy Stoner, director of CSS’s community-based, housing and homelessness services, which operates the hospice.

“We are seeing an uptick in the number of people experiencing homelessness who are resistant to accepting a shelter bed,” said Stoner.

According to the city’s Office of Homeless Services, about 5,700 individuals are considered to be homeless in Philadelphia, a number that includes some 950 who are unsheltered.

The ongoing COVID pandemic, coupled with a spike in overdoses from opioids such as fentanyl, have exacerbated the issue, said Stoner.

Among the essentials they’re seeking are “cleaning supplies to maintain frequent sanitizing” and “Lyft and Uber cards to send residents to various appointments,” said Renee Hudson-Small, assistant director of CSS’s housing and homelessness services, and current director of Mercy Hospice.

Personal items such as underwear are also in short supply, and donations of “any kind of gift card” are welcome “because there is always an emergency or an unusual situation to address,” she said.

“We need the government and people of good faith to advocate and invest in housing for people who are experiencing homelessness,” she said, echoing the theme of this year’s memorial, “remember together, change together.”

And change is possible, said Martin.

“Homelessness is one of those daily things; you wake up one day and say you’re done, that you’re going to go get high and die – or you can wake up and say, ‘I’m going to keep trying,’” he said. “And these guys keep trying.”

PREVIOUS: Carolers call for ‘peace in the womb’

NEXT: Deepen your faith in the new year