Carolers call for ‘peace in the womb’ 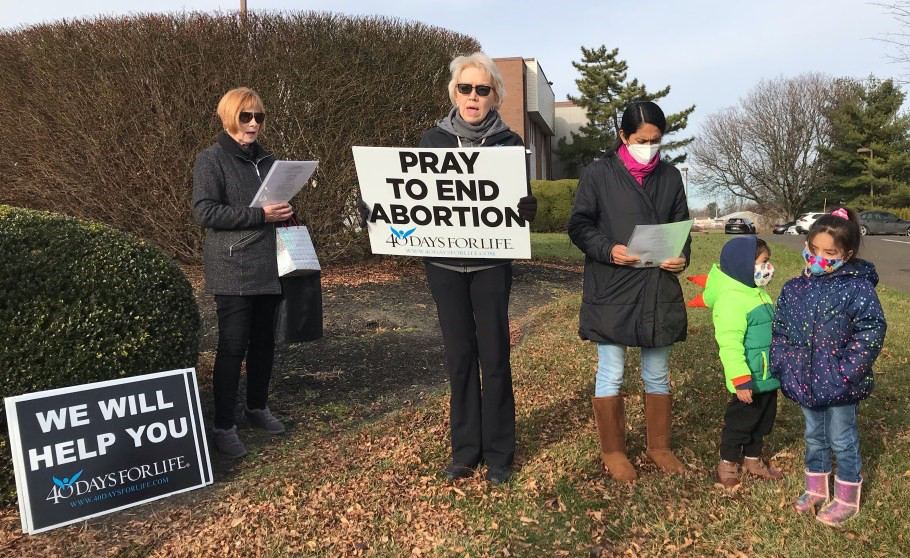 With Christmas just hours away, pro-life advocates in the Philadelphia area recently gathered to promote “Peace in the Womb.”

Close to 20 gathered at Planned Parenthood locations in Warminster and Northeast Philadelphia on Dec. 17 and 18 respectively to sing Christmas carols, part of an annual national observance organized by the Chicago-based Pro-Life Action League.

Since 2003, the caroling events have been “bringing a sense of the joy of Christmas to a place of despair,” said league project coordinator John Jansen.

Local participant Anita Flynn agreed, saying the singalongs were a way of “showing a little love and peace.”

The repertoire, which focused on religious carols such as “Silent Night” and “Away in a Manger,” reflected the “joy about a Baby being welcomed into the world,” said Flynn, a member of Nativity of Our Lord Parish in Warminster. “We were standing outside places not letting babies into the world.”

Jansen admitted that some might find the contrast between Christmas cheer and the clinics “odd” – but that’s the point, he said.

“Women who go to abortion clinics do so on the most sorrowful day of their lives,” he said. “They feel trapped. And we are bringing a sign of joy and peace. That’s what Christmas was – Jesus coming into the midst of the world to free people from their sins, and reminding them they’re destined for something greater.” 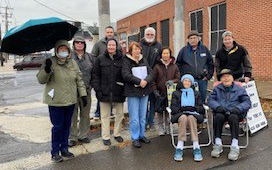 Pro-life advocates gathered Dec. 19 outside a Northeast Philadelphia abortion clinic to sing Christmas carols as part of a national effort organized by the Pro-Life Action League of Chicago. (Courtesy of Anita Flynn)

Jansen said he is aware of some four babies saved from abortion by this year’s caroling.

“One woman in Marietta, Georgia said she was looking for a sign (not to pursue abortion),” he said. “And the singing was for her that sign.”

Flynn said one couple spent time talking to carolers at the Warminster location before driving off and returning to the clinic, but she remained hopeful.

“Maybe they stayed or maybe they still had not come to a final decision and left again,” she reflected in a blog post.

She had a similar perspective regarding the event at the Philadelphia site.

“Who knows if our presence (and our singing) changed anyone’s mind before going through with a scheduled abortion?” she wrote.

Back in the fall, Flynn said, one potential client at the Warminster site was reported to have changed her mind and is now “expecting her baby in the spring.”

The informal caroling, which required no rehearsal or RSVP, also provided an accessible pro-life message, she said.

“A lot of people think of us standing there yelling,” she said. “But we appreciate it is the Christmas season; we’re not out there in sackcloth and ashes.”

Rather, said Flynn, “we hope one of the women will hear our voices and say, ‘It’s Christmas time; maybe I need to think this over.’”

NEXT: Once homeless, choir members share message of hope for those on streets