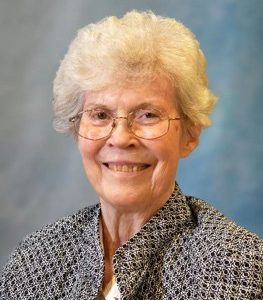 In September 1960 she entered the Sisters of St. Joseph, Chestnut Hill and professed her final vows in 1968.

Sister Eleanor ministered in the archdioceses of Newark and Philadelphia and the dioceses of Arlington, Covington (Ky.), Lexington (Ky.) and Trenton.

She is survived by her brothers, Thomas (Therese), Vincent (Rosemary), David (Karen), Christopher (Nancy) and Stephen, her sisters, Cecelia, MaryJo (Jack), and Anne Marie. Also survived by nieces, nephews, and by members of her Congregation the Sisters of Saint Joseph.

She was predeceased by her brothers, Michael Daniel, Kevin and Joseph Jr., and her sister, Kathleen.

The funeral Mass was celebrated Dec. 1 at St. Joseph Villa.

Donations may be made in Sister’s name to Saint Joseph Villa, 110 W. Wissahickon Ave., Flourtown, PA 19031.