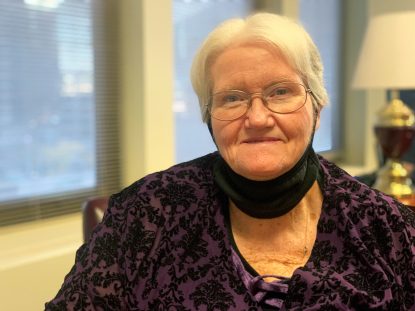 Kathy Boyce, a 51-year employee of the Philadelphia Archdiocese, retired in December 2021 from the only employer she had since graduating from Archbishop Ryan High School. (Gina Christian)

An Archdiocese of Philadelphia employee who’s retiring after 51 years says she’s “enjoyed every minute” of serving the Catholic Church from her desk.

Kathy Boyce, a receptionist with the archdiocesan Office of Catholic Education (OCE), will wrap up her five-decade career this week – one that began before she’d even received her diploma from Archbishop Ryan High School in May 1970.

“I had the job before I graduated,” she said, admitting that interview jitters made her look as if she’d “wanted to jump into the typewriter.”

The Philadelphia native, who grew up in the city’s Kensington and Torresdale neighborhoods, had just one week to relax after graduation before starting out as a clerk typist for the foster care division of archdiocesan Catholic Social Services (CSS).

Boyce eventually worked her way up to office manager, a position she held for some 19 years, during which she supported “about 140 social workers” in finding safe placements for children.

In 1989, a colleague invited her to transfer to the Office of the Moderator of the Curia, which oversees the administrative coordination of the archdiocese.

True to form, Boyce only gave herself a short break before taking on her new assignment as an administrative support person.

During her time there, Boyce found herself juggling both her job and a new responsibility: caring for her mother, who was dying of cancer.

Boyce installed a hospital bed, set up a home care schedule with family members and arranged to take time off for her mother’s chemotherapy sessions – never missing a beat at the office, and continuing to rely on her faith as her mother succumbed in 1996.

About 16 years later, Boyce faced another loss: that of her job, which was eliminated in an August 2012 downsizing of archdiocesan staff.

Yet, said Boyce, “God is so good, and he’s always got an angel somewhere for me.”

In this case, the angel took the form of a coworker, who saw Boyce leave the building after her termination and intervened.

“She talked to her boss, and as I was getting in the house, the phone was ringing,” said Boyce. “I picked it up, and she said, ‘I have a job if you want it.’”

And once again, Boyce barely had a breather: just the Aug. 15 Solemnity of the Assumption of the Blessed Virgin Mary, for which the archdiocesan offices were closed. The next day, she seated herself at her new – and final – desk at OCE.

Although 2012 proved to be “a bad year” for Boyce – she lost two more family members and sustained injuries in a fall – her personal motto of “just keep chugging,” coupled with her faith, has carried her through, she said.

That outlook also helped her navigate the difficult years of the Catholic Church’s clerical abuse scandals in the earlier 2000’s, when archdiocesan staff were routinely subjected to harassment.

“It was hard, especially when you were on the phone and people were cursing you out,” said Boyce. “You’re a human being, just like they are.”

She’s also been able to adapt to new office technology, which evolved rapidly during her archdiocesan tenure.

“We went from standard typewriters to electric, with carbon paper … that was a mess,” she said. “I was willing to learn anything. And I don’t miss the old equipment; it’s much easier these days.”

As she enters retirement, the 69-year-old Boyce — a parishioner at St. Katharine of Siena Parish in Philadelphia — isn’t planning to settle in on the couch: she’s got volunteer projects, part-time positions and a new home on the horizon, along with her gaming and book hobbies.

After her long career, she has some simple advice for young and old alike.

“Keep a smile on your face, even if you’re upset,” said Boyce. “The other person looking at you might have the same problem, and a smile definitely helps.”