Eating turkey, watching Netflix, sleeping until noon, and chilling with family encompassed much of last week’s Thanksgiving celebration. Several local Catholic school athletes, however, delved a bit deeper when asked for what they were thankful.

After winning a PIAA Class 5A state basketball title as a junior, Cardinal O’Hara senior Maggie Doogan helped the Lions snare their first volleyball title since 2009 and was named first-team All-Catholic for her efforts.

“I am thankful for my coaches and teammates every day for pushing me to be better and perform to the best of my abilities,” said Doogan. “I am also thankful for the opportunity to play in the Catholic League in two sports because it is such a competitive league and allows me to compete with my friends at the highest level.

“My God-given ability is something that I was gifted with and continue to use and improve. I could not be more thankful for it because it has brought me so many unique opportunities and allowed me to meet so many people through both basketball and volleyball.”

Archbishop Wood senior Braedon Kehan was hoping the Vikings would rebound from a stunning first-round loss in the PCL soccer playoffs. They did indeed, advancing all the way to the PIAA Class 3A state final before dropping a heartbreaking 1-0 decision.

“I’m thankful for the team I was able to lead for many reasons,” said Kehan. “One of the biggest ones was the fact that no matter what, we always had fun. To me, enjoying your teammates and being able to have fun is one of the most important parts for a team to work. We also could always mess around with each other and have fun, but the guys knew when to tighten up and get serious and focus.

La Salle senior Sam Brown paced the Explorers to their first Catholic League championship since 2015 and was named the Red Division Most Valuable Player after accruing 1,064 rushing yards and 288 more via receiving while scoring 16 touchdowns in 10 games.

“I’m thankful for winning MVP because it shows how hard I have worked on and off the field,” said Brown. “I put a lot of time and energy into getting better each and every year. I truly appreciate that I was selected, and it wouldn’t have been possible without my teammates and coaches.” 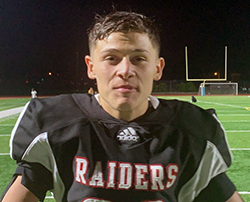 Archbishop Ryan senior Joey Mastrangelo was a first-team football All-Catholic on both offense and defense. (Photo by John Knebels)

“I’m grateful for this year ‘cause my team and I had a rough past two years,” said Mastrangelo. “I’m happy to say we went out on a good note. We changed the program. It’s only up from here for Ryan. We didn’t finish the way we wanted, but we gave it our all, and we’ll never forget this season. The best part was knowing that no matter what, we all had each other’s backs. It was more than football.” 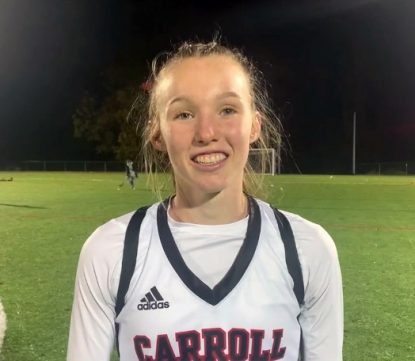 While being pursued from all angles, O’Neill drove down the field for about 30 yards before smacking the ball into the cage while falling to the ground. Her second goal of the game set off a stirring celebration.

“I am so thankful for all of the memories sports has given me this year,” said O’Neill. “Building friendships and winning games with my teammates are experiences that I am very grateful for.”

“I was a three-year varsity cheerleader at Hallahan and joined the golf team at the encouragement of my friends my junior year,” said Kimrey. “I thought, ‘Why not? It will be the last Hallahan golf team.’

“I really enjoyed playing and being the last team to win at Hallahan, but it was bittersweet. I decided to play at Little Flower my senior year with two of my other Hallahan teammates. It felt good to win another PCL in a different uniform. 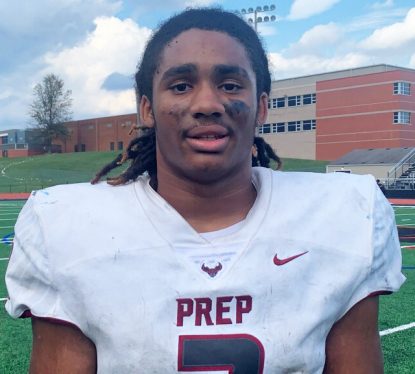 After missing several weeks with a foot injury, St. Joseph’s Prep sophomore Samaj Jones returned in the PIAA Class 6A quarterfinals and scored three touchdowns as the Hawks defeated Freedom High School, 24-21, and advanced to the state football semifinals Dec. 4 against Garnet Valley.

“It was new to me not being able to be out on the field for a foot injury, but I believe it was very efficient to see our team play without me and not miss a beat,” said Jones. “I’m most thankful for every coach on our staff – from offense, to defense, to special teams. Our offensive coaches and head coach Tim Roken push me to be great every day and do everything in their power to help me succeed in today’s society.

“I’m grateful to be able to compete against our defense, which is the best in the state of Pennsylvania. They push me to the max to be great every day.”

Junior Chris Bressi is one of the reasons why Neumann-Goretti’s football team will play in the PIAA Class 3A state semifinal Dec. 3 against Wyomissing High School at Pennridge High School. The Saints’ 28-0 quarterfinal win over Danville marked their third shutout in four games.

“Things have been going very well as we continue to go for the state title,” said Bressi. “One thing I’m thankful for is the family that brought me into this world and gave me the opportunity to do what I love doing. Another thing I’m thankful is all of my Neumann-Goretti coaches who appreciate my talent and gave me a chance to play for them.”