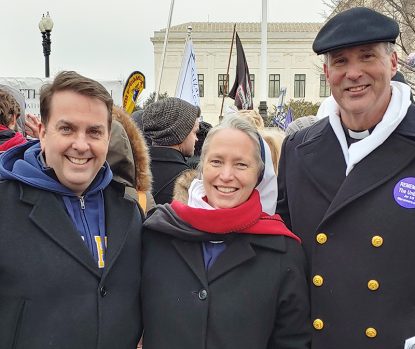 David Savage (left), executive director of the Papal Foundation, spends a moment at the March for Life Jan. 21 in Washington, D.C. with Sister of Life Mary Elizabeth and Bishop Joseph Coffey of the Archdiocese for the Military Services.

The words “Where there is life, there is hope!”, which were attributed to Pope Francis, were very much on my mind at the March for Life in Washington, D.C. on Jan. 21 as well as the Students for Life conference that I attended with my teenage son the following day.

Both events were so full of life and hope, manifested in the positive energy and excitement on the part of attendees.

While I have been to other marches, this one in particular, despite the frigid cold, seemed especially enthusiastic and hopeful for the future of the pro-life movement in our country.

The tens of thousands of attendees gathered were keenly aware of the Supreme Court’s recent hearing of the Dobbs v. Jackson’s Women’s Health Organization case that could provide the court the opportunity to do away with Roe v. Wade, and it contributed to the palpable sense that this march might be the very last before we’re living in a post-Roe world.

Everywhere you looked on the National Mall there were large, colorful banners identifying parishes, dioceses and Catholic apostolates. My parish, St. Norbert’s in Paoli, brought more than 50 people to the march, and my son’s high school, Devon Prep, brought 100 teenagers.

While I spent time with both groups, I found myself running into friends from Philadelphia and around the country every 30 yards or so.

I was impressed with a group from Chicago, Crusaders for Life, who were decked out in bright yellow and entertained the crowd by leading chants and waving papal flags along the march route. I loved hearing the students from Thomas Aquinas College singing “Alma Redemptoris Mater” as we climbed the hill on Constitution Avenue and made our way to the Supreme Court.

Once we had arrived in front of the court, I ran into two great leaders and friends, Sister Mary Elizabeth from the Sisters of Life and Bishop Joe Coffey of the Military Archdiocese. Before I knew it, I was saying a Divine Mercy chaplet with a group from the Archdiocese of Boston. I was proud to be at the biggest Catholic block party that our nation’s capital will see this year!

Marching and praying outside of the Supreme Court was a uniquely American experience and political act, but the values of the pro-life movement are shared by millions worldwide. Because I am a part of a universal church that holds these values dear, I was particularly proud to be a Catholic on Friday.

“Our defense of the innocent unborn … needs to be clear, firm and passionate, for at stake is the dignity of a human life, which is always sacred and demands love for each person, regardless of his or her stage of development.”

But the Holy Father goes on to say:

“Equally sacred, however, are the lives of the poor, those already born, the destitute, the abandoned and the underprivileged, the vulnerable infirm and elderly exposed to covert euthanasia, the victims of human trafficking, new forms of slavery, and every form of rejection.”

It’s the second part of that quote that connects my heart for the love of the unborn with the mission of the beautiful organization that I recently joined — The Papal Foundation — as executive director. For 30 years, the foundation has improved the lives of the poor and underprivileged by providing humanitarian aid and helping create communities of Christ’s love and care through the building of hundreds of churches, schools and hospitals throughout Africa, Asia and South America.

When we lift our voice and stand up for both the unborn and the poor, we’re really speaking up for our hope in them — the hope represented by a life still to be realized or a life that could be made better with a helping hand and the time, abilities and financial resources that we as Americans are so substantially blessed with.

As we wait and hope that this will be the very last March for Life before the end of Roe vs. Wade, we do so knowing that our greatest hope will always be in Jesus Christ and that the strength and understanding of his love will change the hearts of those who do not yet trust in him.

David Savage is executive director of The Papal Foundation.

NEXT: Blessed are those who hunger for climate justice