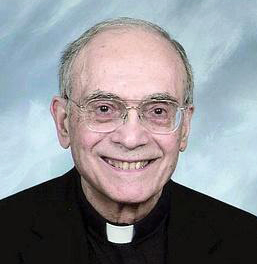 He was born in Calabria, Italy. After moving to the United States in 1940 with his family including parents Vincent and Marina (Mazza) Buccafurni and residing in Philadelphia, he attended St. Mary of the Eternal School in North Philadelphia and Roman Catholic High School before entering St. Charles Borromeo Seminary.

Father Buccafurni was ordained a priest May 15, 1958 at the Cathedral of SS. Peter and Paul, Philadelphia, by Archbishop John F. O’Hara, C.S.C.

The funeral Mass was celebrated Dec. 23 at St. Colman Church in Ardmore. Archbishop Nelson J. Pérez was the main celebrant and concelebrants included Father John Ames and Father Joseph Okonski, and Msgr. Joseph Nicolo, who was the homilist.