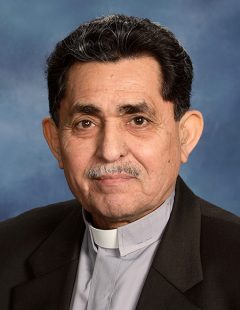 Deacon Adolfo Crespo died Jan. 15 as a result of heart failure at home shortly after his release from Lower Bucks County Hospital. He was 75.

Deacon Crespo was ordained by Cardinal Justin Rigali on June 2, 2007, at the Cathedral Basilica of SS. Peter and Paul, Philadelphia. He was assigned to St. Mark Parish, Bristol until 2009.

While St. Charles was Deacon Crespo’s current parish assignment, his family remained members of St. Mark, where his wife Inocencia was the choir director.

Deacon Crespo served for two years in the United States Army, and was assigned to a base in Germany during the time of the Vietnam War. Upon returning home, he found employment in clerical work with positions at various factories, Amtrak and the U.S. Navy. He retired 27 years ago due to health reasons.

Deacon Crespo and his wife were married for 51 years and raised six children, enjoying 13 grandchildren (one is deceased) and two great-grandchildren.

He is also survived by five brothers and four sisters.