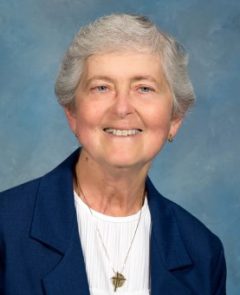 In September 1957 she entered the Sisters of St. Joseph, Chestnut Hill, and professed her final vows in 1965.

Sister Sheila ministered in the Archdiocese of Philadelphia and the Diocese of Allentown.

Sister of Patricia Paccitto (Joseph) and the late Jimmy, she was also predeceased by a niece, Christine. In addition to her sister Patricia, she is survived by a niece, grandnieces, grandnephews and members of her congregation, the Sisters of St. Joseph.
The funeral Mass was celebrated Jan. 21 at St. Joseph Villa, Flourtown.