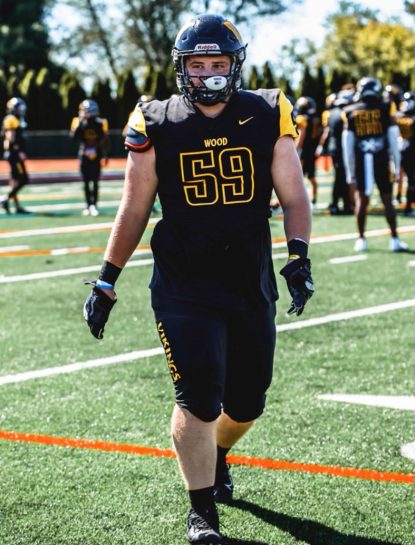 Numerous high school athletes remain uncommitted regarding the next step after graduation.

Like thousands of peers throughout the country, the Archbishop Wood senior football standout underwent the college selection voyage aiming to find a mix of strong academics and football excellence.

After an oft-arduous trek filled with research, counsel and prayer, the 18-year-old recently solidified his choice.

Next September, Logue will suit up in red, gold and black as a member of Ursinus College.

“It’s been a process,” said Logue. “I’m relieved that I know I’m going somewhere that I’ll be comfortable and fit in and ready to go right away.”

Regardless of where Logue landed, the journey from a burgeoning high school neophyte to a Division III college athlete has established an early life lesson.

A volunteer firefighter in Bryn Athyn, Logue endured the back-and-forth elevator ride of discernment. While coaches could peruse tapes of him dominating offensive linemen from his primary spot at defensive tackle, that didn’t necessarily guarantee either an offer or an acceptance.

Too, even if Logue received an invitation, the intangibles needed to be present for him to garner peace of mind.

“Reaching this point in football and even in life is a great accomplishment. Not everyone has the ability to go out there and play and be talented. Being patient is key. You’re not gonna be the best or the strongest when you come in as a freshman, but when you take the time to get better and invest in yourself, then these opportunities will come.”

If his Vikings teammates ask for his guidance, Logue would happily – and humbly – share his newfound wisdom.

“To any younger high school football player or any athlete, I would say to make the most of the time you have,” said Logue. “While you enjoy everything you have, you must be smart not just in the classroom or on the football field, but in life.

“Make good decisions, and everything with fall into place.”

A former Wood All-Catholic lineman who graduated in 2011 and became an offensive and defensive line coach four years ago, Knott watched Logue develop as a football player while maturing physically, mentally and emotionally.

“His sophomore and junior seasons had plenty of ups and down with him being in and out of the lineup,” said Knott. “His senior year, he wanted to improve each and every day, and he did. Dylan was a starter on the defensive line and became a very strong and consistent player for us this year.

“We had our battles, but I’m so proud of the player and man he has become, and I expect a bright future for him and a continued relationship.”

For Logue’s mom Megan, a former basketball player at since-closed Cardinal Dougherty High School, there was only so much she could do as the reality of college beckoned during Dylan’s junior year.

Her insights could serve as a blueprint for anxious parents.

“Sitting back through this whole process and allowing Dylan to make a huge future decision with only giving my thoughts and opinions was difficult,” she said. “You always want to guarantee that your child is doing the right thing and making the right decision.

“You as the parent ‘need’ the control, but not anymore. Now it’s time to sit back and watch all those parenting years unravel. I learned that you have to be confident in yourself that you did the very best job you could raising this little boy into a man. Because at the end of the day, it’s their future, not ours. And most likely, he already knows what he wants for his future, or has a general idea.

“All he’s looking for is your support and love. Give them the confidence to succeed in what they have worked hard for, and most importantly, be proud of them.”

Touchdown. Or, in the case of Dylan Logue, a sack.