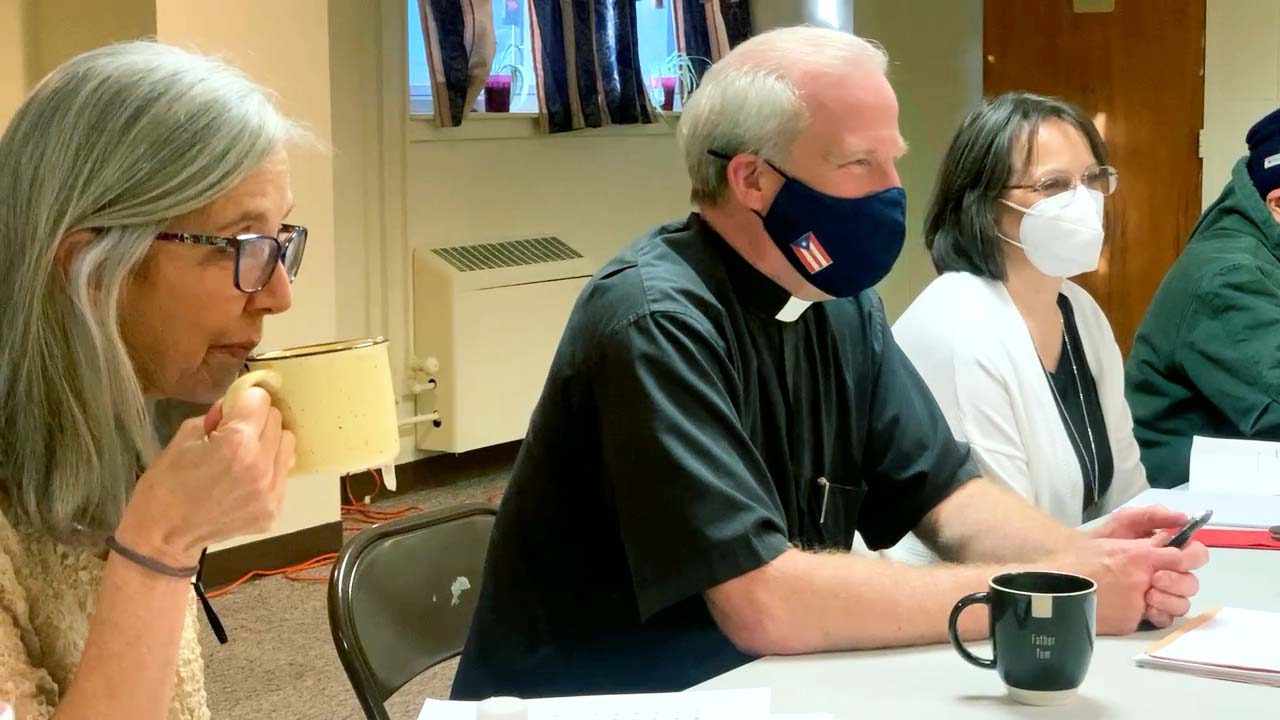 Father Thomas Higgins, pastor of Holy Innocents Parish in Philadelphia, meets with parish leaders, Jan. 26. Such gatherings are key to the archdiocesan phase of the universal Synod, with formal listening sessions to be held throughout the area in March and April. (Gina Christian)

The Philadelphia Archdiocese will hold a number of listening sessions in the coming weeks as part of the universal church’s Synod on Synodality.

Plans for the gatherings were announced in a Feb. 4 letter from Msgr. Brian Hennessy, pastor of St. Alphonsus Parish in Maple Glen and coordinator for the archdiocesan phase of the synod.

Sessions in local parishes and among various groups in listening events across the archdiocese, both in person and virtually, will be led by trained facilitators from the local communities.

The process of listening to the voices of the faithful and particularly those on the margins of society and/or the church is part of the preparation for the 15th Ordinary General Assembly of the Synod of Bishops at the Vatican in October 2023.

The regional archdiocesan sessions, which will include breakout meetings, will be facilitated by the Malvern-based Catholic Leadership Institute (CLI). They are set to take place in person on the weekends of March 19-20 and April 2-3, with online gatherings to be held between March 19 and April 9.

The times and locations for the in-person consultations are still to be determined and will be posted soon on the archdiocesan website, archphila.org/synod, along with registration information.

CatholicPhilly.com will also report on the latest synod developments as they become available.

Parishes, as well as institutions and communities supported by the Philadelphia Archdiocese, are encouraged to host local synodal meetings from March through May.

In an electronic module still under development, individuals will be able to contribute to the consultation from the comfort of their home.

All current synod materials for the archdiocese are available at the archdiocesan synod webpage at ArchPhila.org/synod, with more coming soon.

In tandem with the synodal sessions, CLI will also implement its “Called for More” initiative that will survey pastoral engagement among archdiocesan clergy, parish leaders and parishioners.

The listening sessions — the results of which will be compiled into a report in June — are intended “to offer as many of the faithful as possible with multiple opportunities to participate and be heard,” said Msgr. Hennessy in his letter.

That aim is key to the overall mission of the synod itself, said Msgr. Gregory Fairbanks, an ecumenical specialist and dean of the School of Diaconal Formation at St. Charles Borromeo Seminary in Wynnewood.

“The idea behind a synodal church is that we recognize yes, we are under the guidance of the Holy Spirit, under the magisterium and the legitimate authority of the bishops, but we’re a church that listens to each other,” said Msgr. Fairbanks. “Everybody has a voice in order to be able to share their experiences, their points of view.”

Without signaling that the church is “a democracy,” the synod represents “an attempt to make sure there are more voices being added to the decision-making process, so that we can … be better informed by hearing from God’s people at all levels,” he said.

The word “synod” itself derives from the Greek for “with” and “path,” signifying a way in which “the people of God walk together,” according to a 2018 document by the International Theological Commission.

Throughout the church’s history, the term has been applied to a variety of assemblies convened from the diocesan to the universal levels, with the apostolic Council of Jerusalem (found in Acts 15 and Gal 2:1-10) regarded as a paradigm for synods.

In 1965, Pope Paul VI instituted the Synod of Bishops as a permanent council “to offer more effective assistance to the supreme Shepherd” of the church.

Yet strategic action plans are not in themselves the goal of a synod, he noted.

“The journey is the point, not the destination,” he said. “A synod should lead a church community to learn how to listen – to one another, and to the voice of the Holy Spirit moving in our lives. And listening should become a permanent feature of the church.”

Msgr. Fairbanks agreed, adding that such encounters should prompt not fear, but faith.

“Listen to people … (and) don’t be afraid to listen to another point of view,” he said. “Keep your eyes on the end goal: what does it mean to be Catholic, (and) what is the mission of the church? The salvation of souls, making sure people know about Christ, hear the message of Christ and come to God in the sacraments.”

NEXT: ‘Watch’ this in memory of me? Liturgy in a time of pandemic