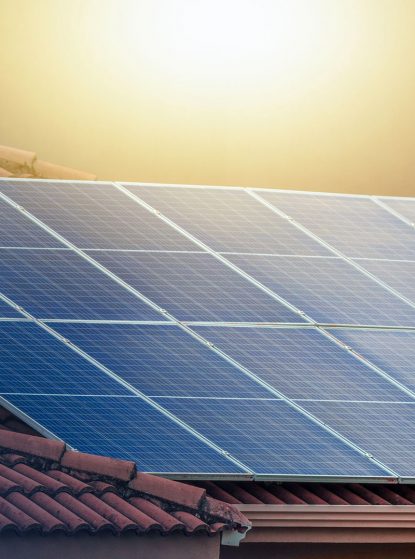 Immaculata University President Barbara Lettieri donated money for the installation of 28 solar panels on the roof of the school’s Parsons Science Pavilion currently under construction.

Immaculata University is responding to Pope Francis’ call to action to care for the earth in several ways, foremost with the installation of 28 solar collector panels on the roof of the campus’ Parsons Science Pavilion currently under construction.

The institutional-grade panels, a gift from Immaculata President Barbara Lettiere (class of 1972), will supply much of the electricity needed to operate eight enthalpy wheels in the HVAC system. The wheels will recover and redistribute previously expended energy used in the heating and cooling of the new facility.

In combination, the two systems are estimated to save approximately $17,000 per year in electric and fuel costs, reduce the consumption of propane burned each year by approximately 8,200 gallons and reduce CO2 emissions by the equivalent of approximately 68,000 pounds of coal not burned by the utility company to produce electricity.

Installation of the solar panels joins the university’s efforts to replace existing light fixtures with LED lights across campus, use geothermal wells to heat and cool buildings, install room occupancy sensors, upgrade HVAC controls to save energy and switch to low-flush toilets and water-saving fixtures.

Also in the past year Immaculata launched a digital textbook program at no cost to students using Open Educational Resources (OER). The ten OER-based courses replaced traditional printed textbooks with online resources including online texts from open-source sites, web-based articles and audio-visual resources in the public domain. The university plans to increase the number of such courses for students.

As it continues its recycling program, Immaculata created a campus-wide taskforce charged with finding new and creative ways that the university can reduce its environmental footprint.

In Pope Francis’ writings, particularly his 2015 encyclical, “Laudato Si’” (On Care for our Common Home) he critiques consumerism and irresponsible development, laments environmental degradation and global warming, and calls all people of the world to take “swift and unified global action.”

“The issues, concerns and tenets laid out by Pope Francis guide Immaculata’s vision in caring for our most precious resource: Earth,” said Lettiere. “The entire campus community is committed to doing our part to care for the environment – including educating our current and future students on ways to contribute to this common goal.”

Established in 1920 and guided by the Sisters, Servants of the Immaculate Heart of Mary, Immaculata University offers more than 70 undergraduate and graduate programs, and is home to 21 NCAA athletic teams plus a coed esports team. The suburban campus is located near Malvern, Chester County.