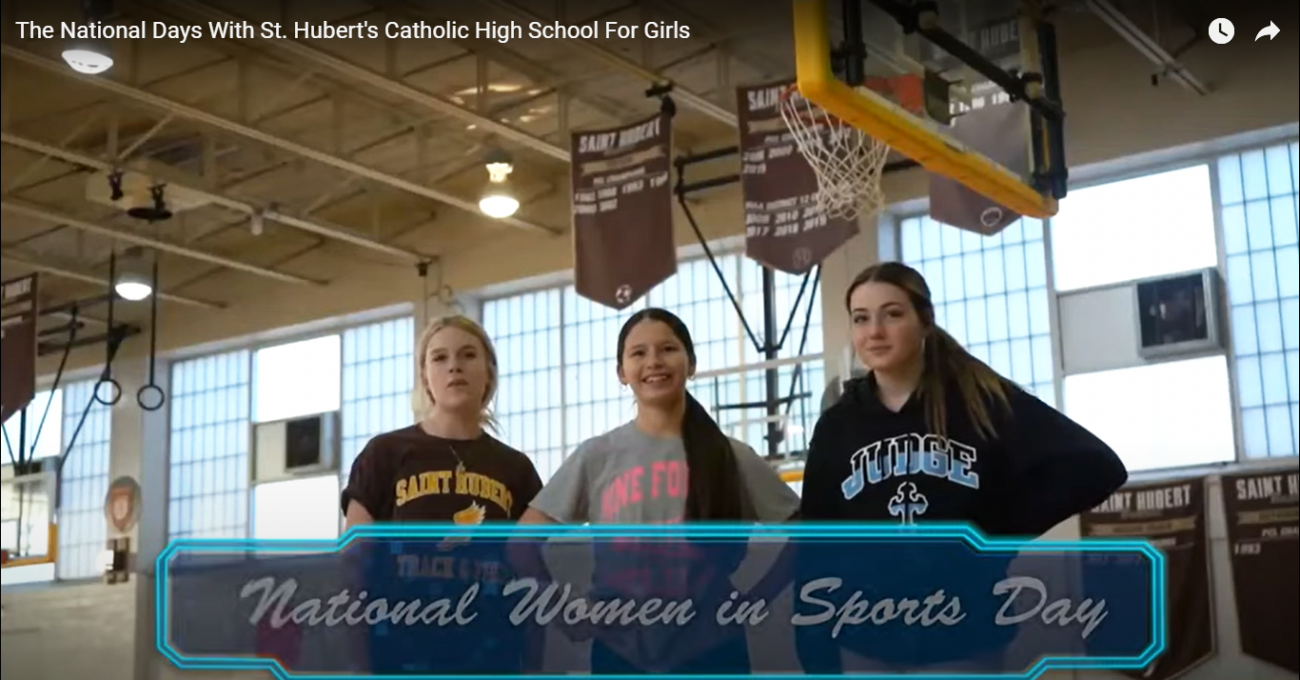 Students from St. Hubert Catholic High School for Girls appeared in a video they produced for CatholicTV that aired Feb. 2. (This Is The Day/CatholicTV/YouTube)

Students at an archdiocesan high school recently took to television to share their enthusiasm for Catholic education – along with their thoughts on women in sports, tater tots and even groundhogs.

Juniors and seniors at St. Hubert Catholic High School for Girls scripted, filmed and starred in a 60-second video aired Feb. 2 on CatholicTV. The network, a ministry of the Archdiocese of Boston, broadcasts an array of faith-based programming via cable, satellite and internet platforms.

In honor of National Catholic Schools Week (Jan. 30-Feb. 5), the Bambies were invited to create a segment for an episode of CatholicTV’s flagship morning show, “This Is the Day.” Hosted by Boston Auxiliary Bishop Robert Reed and co-presenters Jay Fadden and Kevin Nelson, the show regularly highlights national days — from the whimsical to the worthwhile — and asked the St. Hubert students to take over the task for National Catholic Schools Week (Jan. 30 to Feb. 5).

The group completed the shots in an average of two takes, filming after school using new cameras gifted from the Ambassador’s Fund for Catholic Education.

And although Kelly admitted the crew generated “plenty of bloopers,” there was no evidence of stage fright at the prospect of appearing on a nationally distributed show.

“Our girls love the dramatic arts,” said St. Hubert president Lizanne Pando. “Many of these girls are in theater … and even the girls who aren’t used to being on camera loved it.”

If anything, the students were more apprehensive about how their fellow Bambies might react.

“When someone sees you in the hallway and says, ‘You were in the video,’ I’m like, ‘No, I wasn’t,’” laughed Steinmetz.

The show’s hosts were impressed by the girls’ efforts, with both Bishop Reed and Fadden joking that Nelson “had competition” for his role as a presenter.

For their part, the students were elated by the opportunity to work on the project.

“It was fun to represent our sisterhood,” said Clifford.