They’re ‘going to the Palestra’ for a Catholic League classic

PHILADELPHIA – Going to the Palestra.

In the two Philadelphia Catholic League semifinals played at Conwell-Egan High School on Feb. 22, eight different players were interviewed after their respective victories. Unprompted, every one of them mentioned that heralded phrase.

Going to the Palestra.

On Feb. 28, the league’s two top seeds will meet in what promises to be a classic PCL final. Top-seed Archbishop Carroll, which finished a perfect 10-0 during the regular season and stopped eight-seed West Catholic in the quarterfinals, defeated five-seed Neumann-Goretti in the semis, 50-35.

O’Hara’s only league loss was at Archbishop Carroll, 49-39, on Feb. 1. The Lions finished 9-1 and then handled seven-seed St. Hubert in the semifinals. 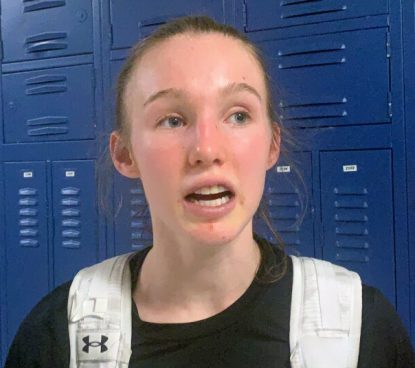 “I’m really proud of the girls,” said Carroll coach Renie Shields. “They stepped up when they had to step up. It gives the girls a chance to go down to the Palestra and see what it’s actually like. There’s nothing like it. I always tell the girls – it’s the best feeling you’re ever going to get.”

The Patriots were forced to play most of the game without key guard Brooke Wilson. The second-team All-Catholic sophomore is one of Carroll’s best defenders, and her energy level is unmatched. But with 6:11 left in the second quarter, Wilson rolled her ankle and lay on the gym floor for seven scary minutes. She was able to hobble to the bench, but she was unable to join her teammates on the court.

Her status in the upcoming final is undecided.

“We just pulled together and continued to push through,” said O’Neill. “We knew Brooke’s assignments. We focused on picking up areas that we could, and we just stayed positive.”

“I definitely think with experience I’m calmer now,” said O’Neill. “I wasn’t maybe when I was a freshman.”

Carroll outrebounded the Saints by 44 to 27.

“We knew how gritty they were and how scrappy they were on the boards,” said O’Neill. “The number one thing was boxing out and getting boards, and I feel we did a good job with that.”

The Patriots will face an O’Hara team that has won more titles (18) than any other Catholic League team. The second most? Archbishop Carroll, with 10.

With Wood senior and PCL Most Valuable Player Ryanne Allen scoring 18 points and doing all she could to will the Vikings to victory, the Lions received balanced scoring from their five starters and held the Vikings to seven points in the third quarter.

“We knew we were in for a battle,” said O’Hara coach Chrissie Doogan. “We had a couple of good days of practice leading up to it, so I felt good. I thought our seniors stepped up late, played some defense, and got some rebounds.

“They just didn’t let us lose.”

The key senior was Maggie Doogan, who doubles full-time as the coach’s daughter. Doogan finished with 17 points, seven rebounds, four steals, and three assists. On her last point – a free throw in the closing seconds – Doogan reached 1,000 career points.

“This was such a fun game to play, but we’re not done,” said Doogan. “We still have to finish this off at the Palestra and get the job done. With this group of girls, going to the Palestra is so special. We all play great together and are super close off the court, so being able to get this opportunity is amazing; just have to finish the job.

“Scoring 1,000 is such a cool honor, and my teammates were so happy for me. It was great. I didn’t even know I got it until after the game, but it was a cool moment that I’m glad I got to experience.” 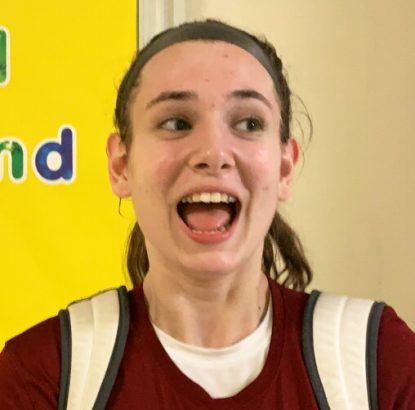 As well as O’Hara’s upperclassmen played, the Lions would not have emerged victorious had it not been for freshman Molly Rullo.

“They have made me very comfortable from the start,” said Rullo. “They have helped me a lot.”

Best part of her freshman year?

“Going to the Palestra,” said Rullo.

NEXT: In PCL finals, Archbishop Ryan hopes 4th time is the charm