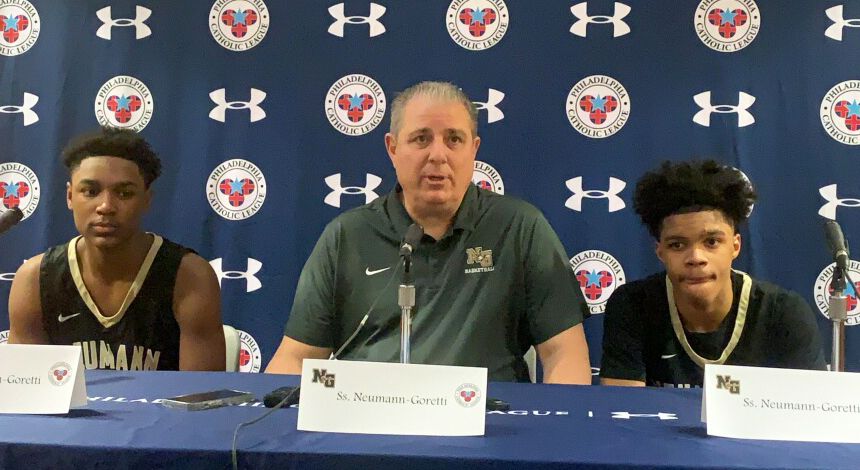 Neumann-Goretti sophomore Rob Wright (left), coach Carl Arrigale (center) and sophomore Khaafiq Myers discuss their 62-60 win over top-seed Roman Catholic in the Philadelphia Catholic League semifinals Feb. 23 at the Palestra in Philadelphia. The Saints will face Archbishop Ryan in the PCL championship Feb. 28 at the Palestra. (Photo by John Knebels)

One team needs to be reintroduced to the Catholic League championship final.

The other, not so much.

When Archbishop Ryan and Neumann-Goretti take center stage in the Philadelphia Catholic League championship Feb. 28 at the Palestra, however, history won’t have anything to do with the outcome.

“It’s a different experience for every person, and every year is different than the past,” said Neumann-Goretti coach Carl Arrigale. “In the end, it’s all about the final two teams that have a chance of doing something special. There’s nothing like it.”

During the regular season on Feb. 11, Neumann-Goretti edged the Raiders, 52-49. This will mark the second time that the two schools have met in the final, with then-St. John Neumann coming out on top in 2002.

Since 2001, Neumann-Goretti has captured 11 of its 21 overall titles. Under Arrigale, the Saints have seized a coaching-record 11 crowns overall, including seven since 2009.

This season, however, has been like no other. Literally. After playing its first league game on Jan. 5, Neumann-Goretti was shut down because of COVID.

When play resumed, the Saints were forced to play an unsightly 12 games in 21 days. They somehow recorded a 10-3 record.

After finally receiving a few days off to prepare for the quarterfinals, the Saints overcame five-seed La Salle, 51-48.

“This year has been different because of what we went through during the season,” said Arrigale. “We played our season in two and a half weeks. It was almost one two-week game. We couldn’t prepare. We played the same game for two and half weeks. We finally had a chance for the playoffs to get a couple of days and try to get better.”

“The thing is, we got more to do,” said Arrigale. “The guys are hungry. If after everything we went through this year, if we could pull this off, it would really be something.”

Consider seventh-year Raiders coach Joe Zeglinski both excited and relieved to be one win away from giving his alma mater reason to purchase a new banner for the school gym.

“It’s my fifth time here and I didn’t want to go 0-5,” said Zeglinski. “The kids stepped up for the program and the alumni.” 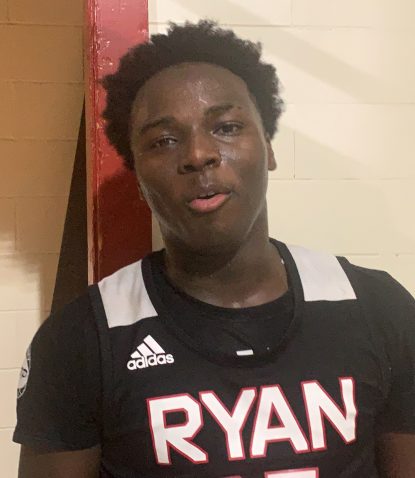 “I knew if I hit one at the end, the worst that could happen was that a three pointer would tie the game,” said Snead. “When the second one went in, I knew we had it.”

After a long wait, Archbishop Ryan had reached the finals.

“I can’t wait for Monday,” said the aforementioned Stewart.

PREVIOUS: They’re ‘going to the Palestra’ for a Catholic League classic