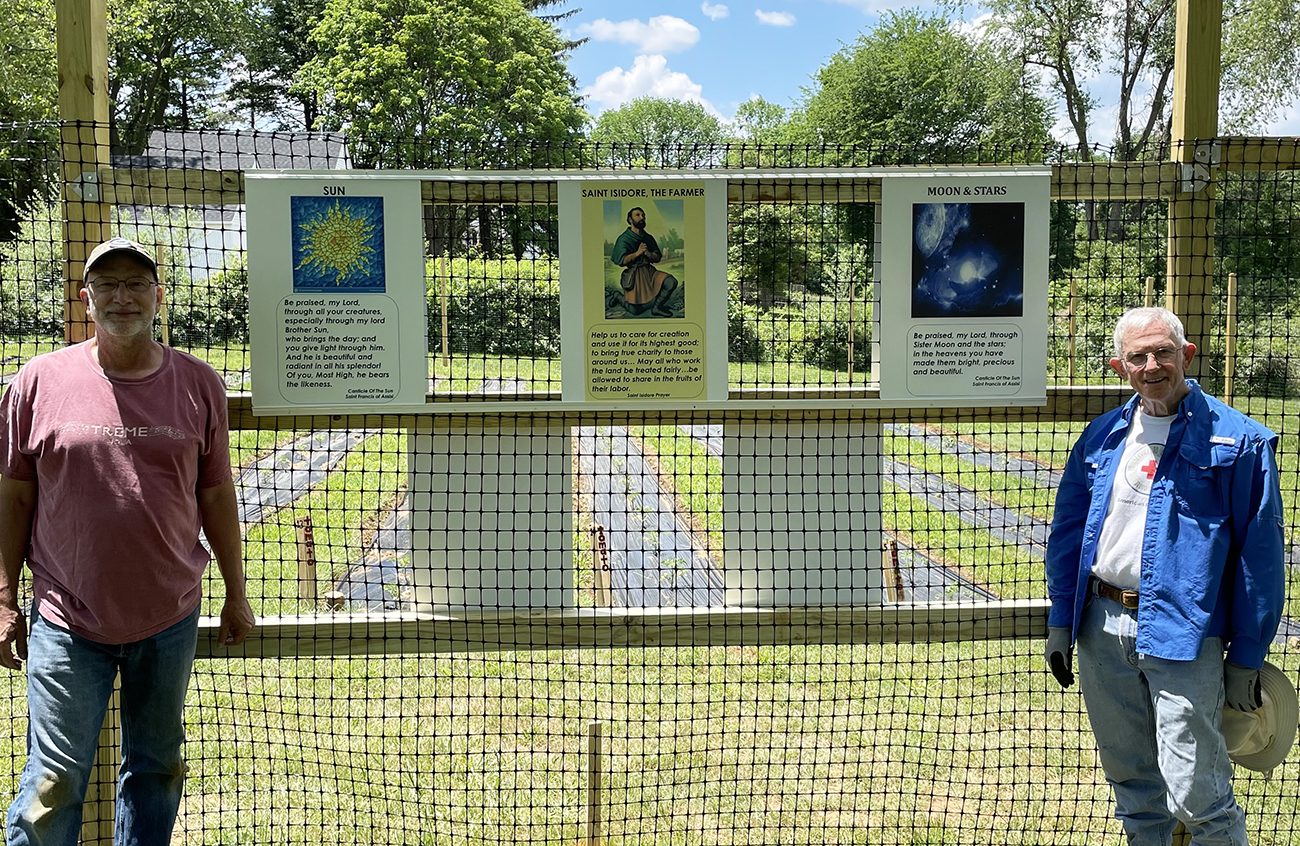 Steve Muntz (left) and Bob Holliday of St. Cornelius Parish in Chadds Ford pose proudly before the parish's Matthew XXV garden, with some of its prayer plaques including that of St. Isidore the farmer.

It’s a chance to “get your hands into the dirt,” says Bob Holliday of the Matthew XXV parish garden at St. Cornelius Parish in Chadds Ford.

The garden measures 70 by 100 feet with prayer plaques dispersed throughout, featuring prayers contemplating nature by St. Francis of Assisi, St. Hildegard of Bingen and St. Isidore the Farmer.

“It’s really something to walk into the garden. It gives you a different feeling,” he said. “This coming year, we’re focusing on integrating faith development into the garden through contemplation and music.”

Holliday has been a parishioner at St. Cornelius for 41 years, and he’s the coordinator of the parish’s Laudato Si’ ministry, named after Pope Francis’ 2015 encyclical on environmental stewardship and “care for our common home.”

The ministry started 15 years ago as the Environment Simplified Living ministry, and is now aligned with EcoPhilly, a year-old creation care initiative in the Archdiocese of Philadelphia.

“Our goal is ultimately to get a ‘creation care’ team or person in every parish and school across the archdiocese,” said John Humphreys, co-founder of EcoPhilly. “It’s a stretch goal because there’s only a handful at the moment, but it’s achievable.”

Last January, EcoPhilly held its first workshop for building creation care teams at parishes. The event, held on a Saturday morning at Villanova University, was called “From Faith to Action:  The Nuts and Bolts of Nurturing a Creation Care Team in Your Parish.” Thirty people attended from 15 parishes, according to Humphreys.

In addition to the parish garden, the creation care team at St. Cornelius partnered with Catholic Relief Services (CRS) to sponsor a sustainable water project in Ethiopia. CRS also demonstrated the dramatic difference between daily water usage per person in the United States compared to Ethiopia – 173 gallons to five, respectively.

The St. Cornelius team’s goal is creating “ecological virtues that enliven the faith and help the poor,” Holliday said. “An enlivened faith is one that embraces you. The foundation of it all is Christian spirituality.”

Both Holliday and Humphreys say they found inspiration in Pope Francis’ 2015 encyclical.

“’Laudato Si’ is not just about climate change,” said Humphreys. “He covers all of the major facets of the global crisis,” including loss of biodiversity, hazardous chemicals and waste, marine pollution, destruction of forests, lack of clean drinking water and social problems such as inequity, greed and poverty.

Regarding biodiversity — the variety of life on Earth at all levels — Humphreys said humanity has “no right to carelessly or deliberately make any species extinct. Every species has been made by God. Every species is here as a sign of God’s love for creation and is beautiful in its own right.”

“Pope Francis caused us to take a look at things holistically,” said Holliday, “and also, he calls for great spiritual conversion.”

Kit McGovern is the coordinator of the climate ministry at Our Mother of Consolation Parish in Philadelphia’s Chestnut Hill section, her parish since 1974. The ministry is another creation care team aligned with EcoPhilly.

McGovern became interested in environmental issues through her teenage granddaughter, whose interest presented McGovern with perhaps “a way I could connect with her.”

The climate ministry started in the spring of 2020 with a regular column on “Laudato Si’” in the weekly parish bulletin. The ministry’s first event was an organized hike and trash clean-up along the Wissahickon Creek the following fall.

The next year brought a group reading of the “Laudato Si’” encyclical and regular recycling events. At that time the ministry also became aligned with EcoPhilly as a creation care team. 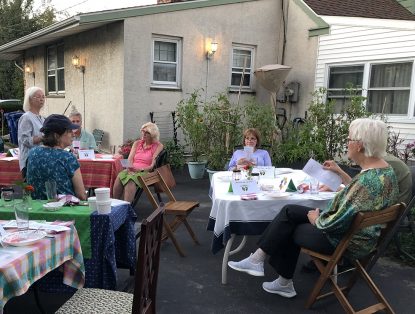 Members of the climate ministry of Our Mother of Consolation Parish in Chestnut Hill, a creation care team aligned with EcoPhilly, discuss planning for the team’s activities after an evening meal.

This spring the ministry plans a cleanup of Tacony Creek Park in Philadelphia around Earth Day (April 22), a panel discussion on environmental justice (April 24) and a baby clothing swap to support Walking with Moms in Need, a pro-life initiative.

McGovern even found a way to link the fasting and abstinence practiced by Catholics during Lent to an environmental initiative at her parish. The “Meatless Fridays” initiative teaches parishioners that their Lenten fasting can also help the environment by reducing greenhouse gas emissions, deforestation and soil degradation.

Janelle Cooney is the coordinator for the creation care team at St. John Chrysostom Parish in Wallingford. She has been a member of her parish for 28 years and involved with the team, now affiliated with EcoPhilly, since 2016.

Cooney says partnering with EcoPhilly has provided her with networking opportunities and sharing of resources. “Now we know other creation care teams at other parishes,” she said. “I felt like all these years, I wasn’t aware of anyone else doing what I was doing.” 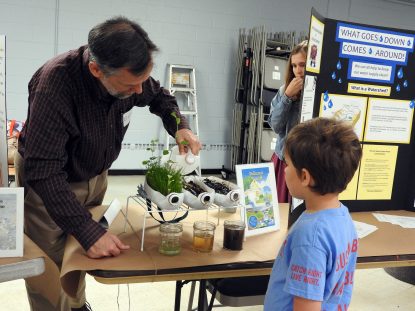 A youngster of St. John Chrysostom Parish in Wallingford learns how well-rooted plant life is better than soil with organic compost or loose soil for holding and filtering water runoff, during an Earth Day demonstration in 2019 at the parish hall led by the parish’s creation care team.

For the past four years, Cooney and her team have sponsored a creation-themed Mass at the parish during Labor Day weekend to honor the World Day of Prayer for the Care of Creation, celebrated Sept. 1. The Mass features creation-inspired praise music and altar decorations, reciting “A Prayer for Our Earth” written by Pope Francis, and petitions for creation during the Prayer of the Faithful.

During the parish’s yearly Advent Festival, Cooney and her team present an exhibit on sustainably wrapped presents as an alternative to traditional gift wrap that results in waste.

The team’s biggest event is the Earth Day Celebration, which has been on hold for the last two years due to the COVID-19 pandemic, but it will be held this year on May 22, exactly one month after Earth Day. The event to be held in the church hall will feature educational exhibits and posters, locally produced foods, recycling demonstrations and a puppet show called “Reduce, Reuse, Recycle.”

“It’s designed to open people’s eyes to the products we’re using, and (for which) there’s a cost,” she said. Cooney hopes integrating environmental education throughout parish life will enlighten parishioners and help bring about change.

Bill Stigliani has been “dedicated to sustaining the planet for future generations since the 1970s.”  He saw first-hand the global impact of environmental issues in 1986, when he and his family were 700 miles away when the Chernobyl nuclear accident occurred. 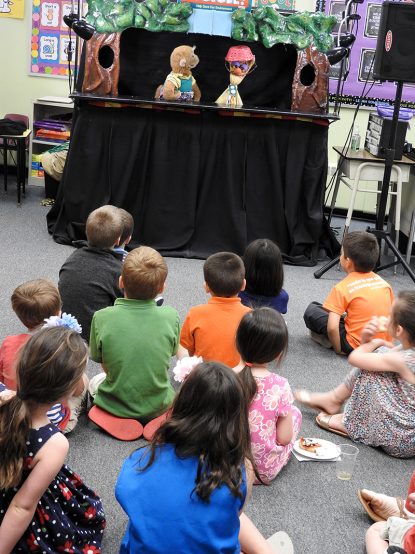 Stigliani is a professor emeritus of environmental science and sustainability, and he’s the co-chair of the new creation care team at Old St. Joseph Parish in Philadelphia, the oldest Catholic church in Philadelphia, founded in 1733.

The team started an environmental movie series beginning with the 2020 documentary, “David Attenborough: A Life on Our Planet.” Later this year they’ll show other movies including “I Am Greta,” a 2020 documentary about teenage climate activist Greta Thunberg, and “The Biggest Little Farm,” a 2018 documentary about the challenges and successes of a California couple building a sustainable farm.

There’s also an ongoing lecture series to “stimulate thinking” about the ecological crisis “so people can engage on solutions, and also to frame the story because some people don’t believe in climate change,” Stigliani said.

An April 24 workshop is scheduled to discuss recycling and lowering one’s carbon footprint.  Attendees will be able to calculate their carbon footprint using an online calculator, and then find ways to lower that footprint.

Using a combination of grant money and donations, the team purchased for their parish 100 megawatt hours of Renewable Energy Certificates, a source of renewable electricity.

Stigliani said partnering with EcoPhilly has been invaluable to his team since the organization “brings together a diversity of backgrounds. I’ve gotten to meet other partners at workshops. It’s a big synergy when you get people together. There’s an emergence of new ideas you wouldn’t think of on your own.”

EcoPhilly “can encourage and inspire creation care teams that they’re not alone,” Humphreys.  “There are people just like them in the next parish, maybe also forming a creation care team. We’re trying to give them whatever resources we can find and provide for free and be there if they need help in any way.” 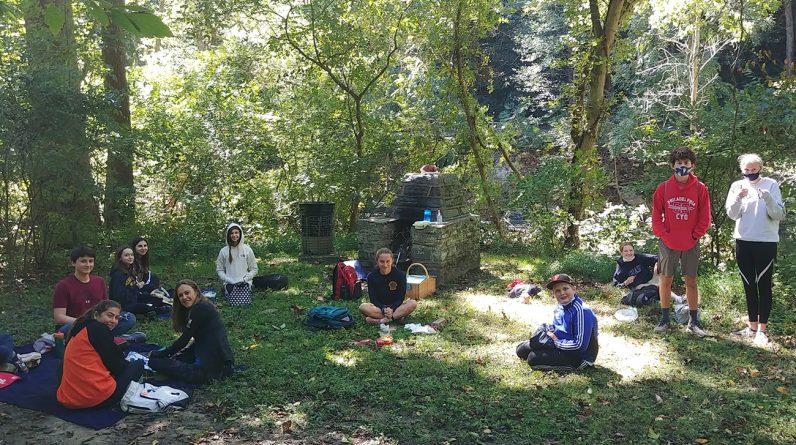 Teenagers of Our Mother of Consolation Parish, Chestnut Hill enjoy a hike together along the Wissahickon Creek last fall, an event of the parish’s climate ministry.

NEXT: Face mask requirement ending at archdiocesan schools in Phila.