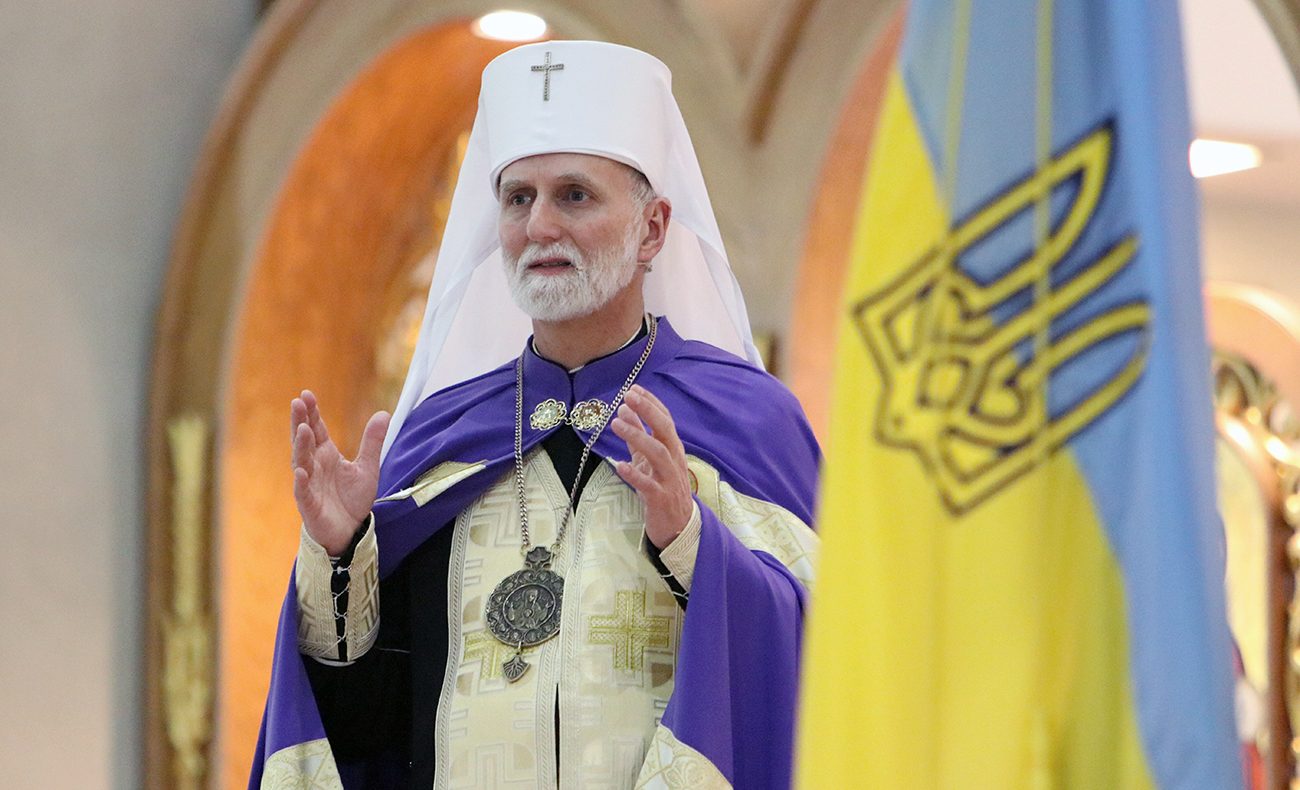 Some 175 people gathered this past weekend for a five-hour prayer vigil seeking peace in Ukraine, now in the second week of a full-scale invasion by Russia.

The March 5 services — which included a Divine Liturgy (Byzantine Rite Mass), vespers, reflections and the rosary — took place at the Ukrainian Catholic Cathedral of the Immaculate Conception in Philadelphia.

“We pray and … hold hands with the rest of the world in prayer,” said Archbishop Gudziak in his welcoming remarks for the vigil, which was livestreamed in its entirety on the archeparchy’s Facebook page.

The vigil’s homilist and cantor was Father Peter Galadza, retired director of the Metropolitan Andrei Sheptytsky Institute in Toronto and now a fellow at The Catholic University of America.

Auxiliary Bishop Michael Fitzgerald and Auxiliary Bishop John McIntyre of the Philadelphia Archdiocese were also in attendance, along with clergy, religious and faithful from both the archeparchy and the archdiocese. 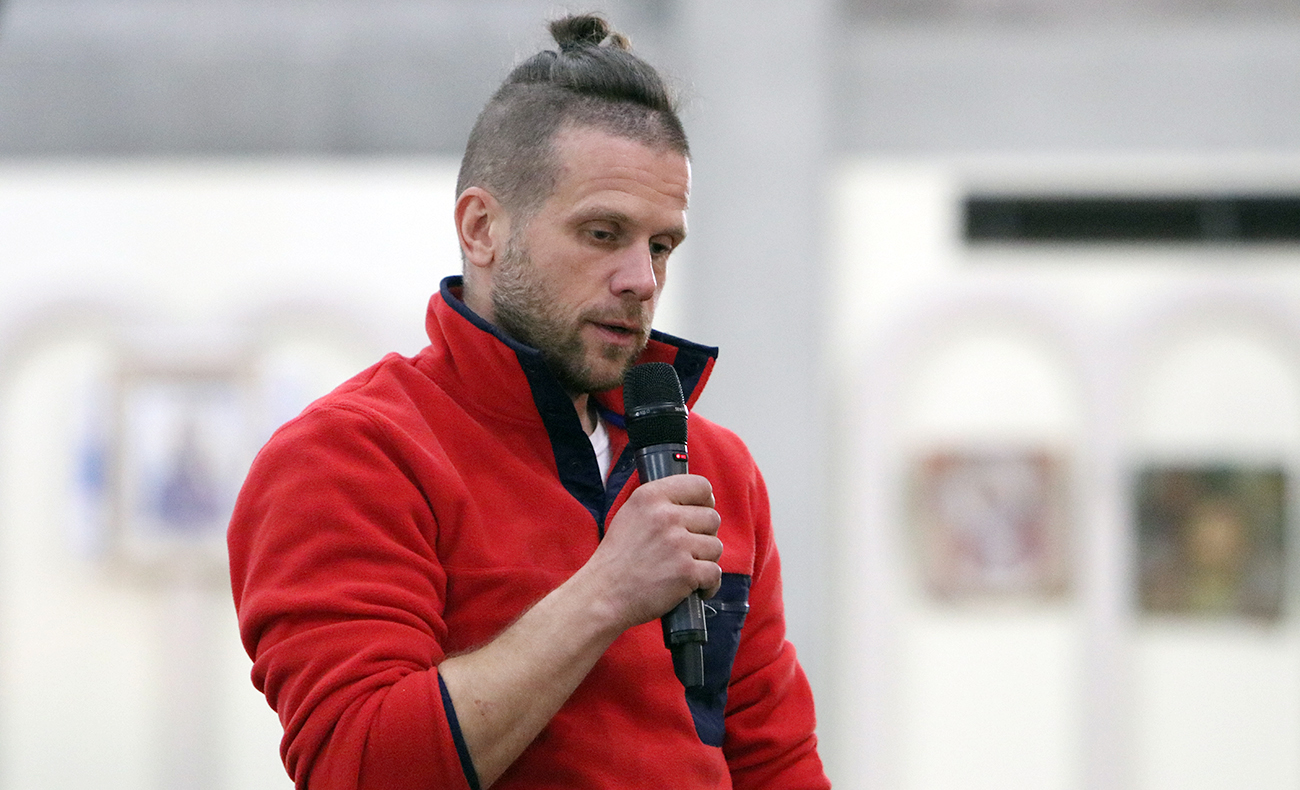 At a March 5 prayer vigil hosted by the Ukrainian Catholic Cathedral of the Immaculate Conception, Ukrainian native Anatoliy spoke of his sense of helplessness as his parents struggled to escape Ukraine. (Sarah Webb)

Emotions ranging from anger, sorrow, fear, anxiety and even guilt were in evidence during the evening’s Q&A segment, when Archbishop Gudziak invited participants to share personal reflections regarding the invasion.

A young man named Anatoliy admitted he battled a profound sense of frustration and helplessness while his parents struggled to escape Ukraine for Poland and then Switzerland.

“I am deep into this situation psychologically, and attached to the news,” he said.

“Should I go to Ukraine?” he asked, to which Archbishop Gudziak quickly replied that the priest was needed here, as refugee numbers from that nation “are only going to explode.”

More than 2.5 million have fled Ukraine since the Feb. 24 start of Russia’s full-scale invasion, which has evoked global condemnation. Prior to that, close to 1.5 million were internally displaced by Russia’s 2014 annexation of Crimea and its establishment of two separatist areas, Donetsk and Luhansk, in eastern Ukraine. 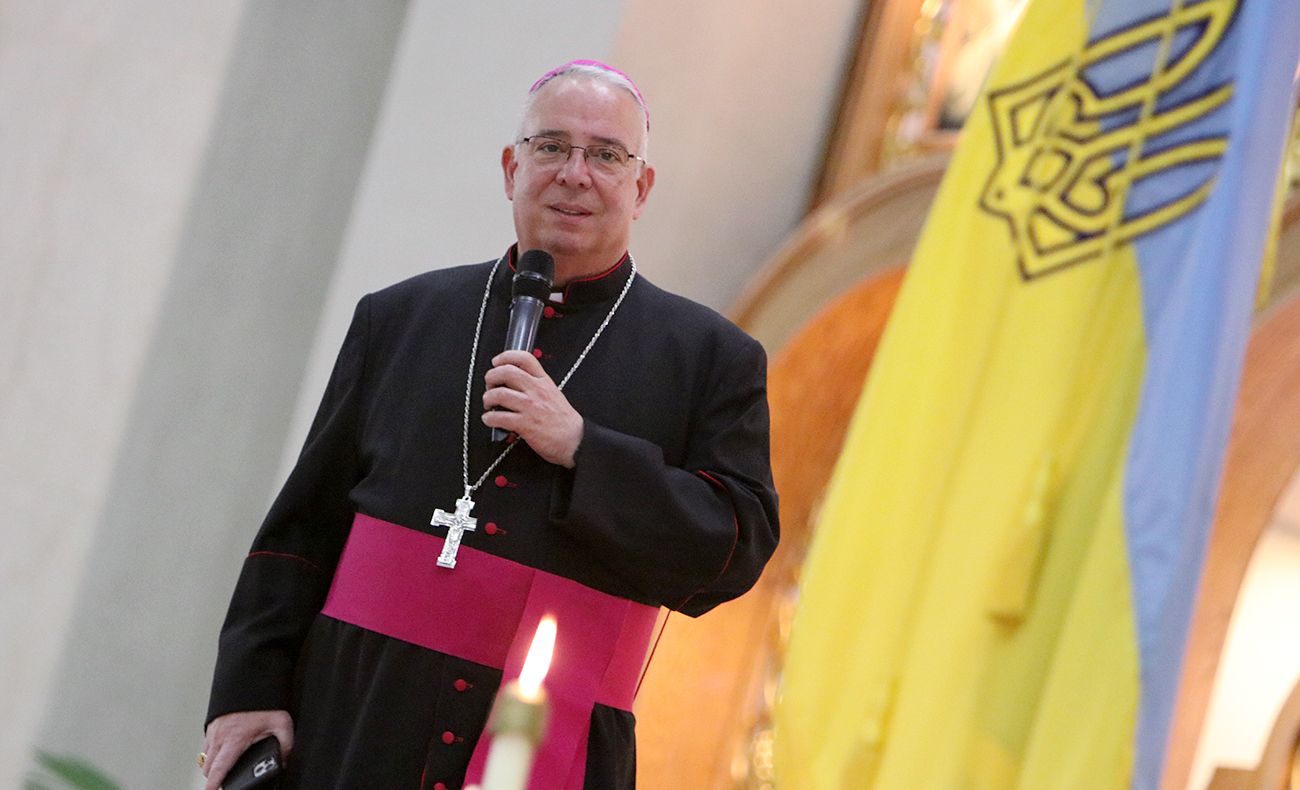 At a March 5 prayer vigil for Ukraine hosted by the Ukrainian Catholic Cathedral of the Immaculate Conception, Archbishop Nelson Pérez said his own family had been “victims of Russian tyranny,” having fled communist Cuba. (Sarah Webb)

Russia’s invasion of Ukraine shows “the direct experience and the ramifications of the great evil of our fall” as humans, said Archbishop Gudziak, noting that in the garden of Eden “Adam and Eve made (a) grab” to appropriate what was not theirs.

At the same time, said Archbishop Gudziak, the world has witnessed “a moral victory” by Ukraine, a David-vs.-Goliath conquest that is “biblical” and “black and white,” since “everybody knows who is true, who is just, who is right” in the situation.

That contrast is underscored by hundreds of thousands “giving everything, (including) their lives” to “defend the innocent, the poor, babies … the aged, the handicapped,” he said. “People are lining up for a project that could kill them.”

The struggle is ultimately prefigured in Christ’s passion, said both Archbishop Gudziak and Father Galadza.

In his homily, Father Galadza observed the Ukrainian word for baptism, khreshchennya, “is a word that carries the sense of being immersed in the cross.”

“The Lord has … invited us to enter with him into the reality of the cross … not because he wants us to remain in suffering, but so that we understand whenever we suffer in Christ, there is a resurrection at the end; there is new life,” he said.

Yet the temptation to “fall into the pit of evil, vengeance and resentment” is ever present, particularly when “the people who are trying to kill you apparently seem to know exactly what they’re doing,” said Father Galadza.

Christ remains close to deliver the oppressed from that danger, he said.

“When I am filled with the resurrected Body and Blood of my Lord Jesus Christ, there is nothing … that I cannot do in him,” said Father Galadza. “There is nothing that our brothers and sisters will not be able to accomplish in Ukraine unto the good.”

“We see the courage of people in Ukraine on the front, in the streets, in the homes, in the church, in the subways — people who have faith and believe,” said Archbishop Gudziak. “And in some mystical way, to the whole world, they’re saying, ‘Believe.'”

In his address prior to leading the rosary, Archbishop Pérez – whose parents fled communist Cuba — agreed, saying he and his family were “also victims of Russian tyranny” and had survived its attempts to “crush the human spirit.”

Christ’s triumph over sin and death, and the powerful intercession of Mary, provide well-founded assurance in moments of loss, heartache and injustice, he said.

Archbishop Pérez reiterated the words of a young woman who during the Q&A had declared “the victory was already won at the cross,” then asked for the young woman’s name.