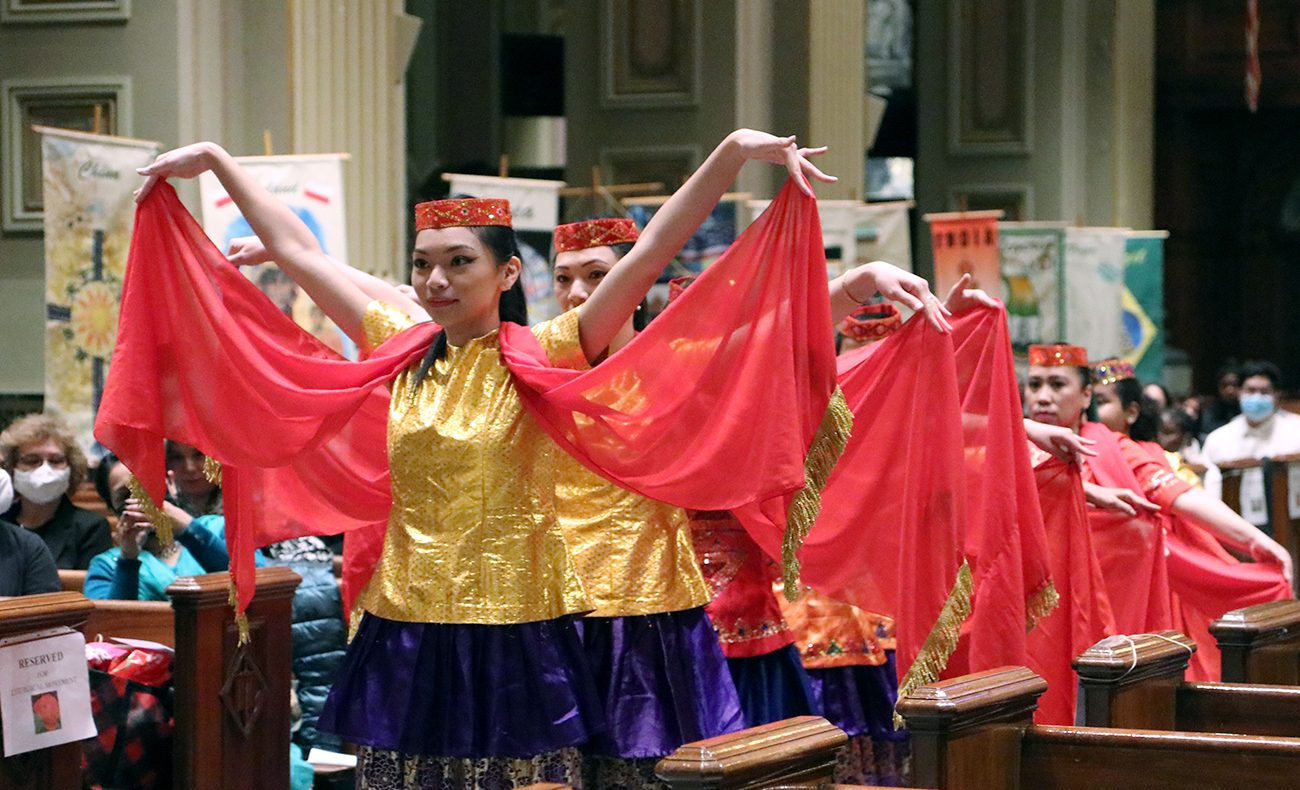 Members of the Philadelphia Archdiocese's Indonesian Catholic community perform a liturgical movement sequence prior to the March 12 Cultural Heritage Mass at the Cathedral Basilica of SS. Peter and Paul. (Sarah Webb)

Some 300 gathered at the Cathedral Basilica of SS. Peter and Paul March 12 to experience what Archbishop Nelson Pérez called “the way God looks upon the church.”

The archbishop was the principal celebrant and homilist at the archdiocesan Cultural Heritage Mass. The annual liturgy, which highlights the diverse backgrounds of Catholic faithful in the five-county Philadelphia region, was sponsored by the archdiocesan Office for Pastoral Care of Migrants and Refugees (PCMR); the Office of Cultural Ministries, which includes the Office for Black Catholics and the Office for Hispanic Catholics; and the Pontifical Mission Societies. PCMR director and Religious Sister of the Assumption Gertrude Borres spearheaded the coordination of the Mass.

Attendees, many dressed in native attire, hailed from approximately 28 different national, ethnic and Eastern Catholic Church traditions, representing some 20 languages. Scripture readings, prayers and hymns were offered in a total of nine languages, including Bahasa, French, Igbo, Konkani, Kuranko, Malayalam, Polish, Portuguese, Swahili, Tagalog and Tamil. Nine choirs provided accompaniment for the Mass, while liturgical movement was offered by a group from the Indonesian Catholic community.

Concelebrating with Archbishop Pérez were priests from 14 apostolates serving 36 parishes where distinct cultural communities have a presence.

Among them was Father Tariq Isaac, chaplain of the archdiocesan Pakistani Catholic Community, based at St. William Parish in Northeast Philadelphia and now marking its 20th year.

Ryan Shahzad – at age 22, one of that community’s youngest members – said he enjoyed the opportunity encounter “other cultures, our other brothers and sisters, and to celebrate Mass with them.”

Also on hand were Father Roman Pitula, rector of the Ukrainian Catholic Cathedral of the Immaculate Conception in Philadelphia, and several members of the area’s Ukrainian Catholic community. The Ukrainian national flag was displayed steps away from the cathedra (the archbishop’s chair), along with a poster of images showing the devastation from Russia’s invasion of Ukraine, now in its third week. 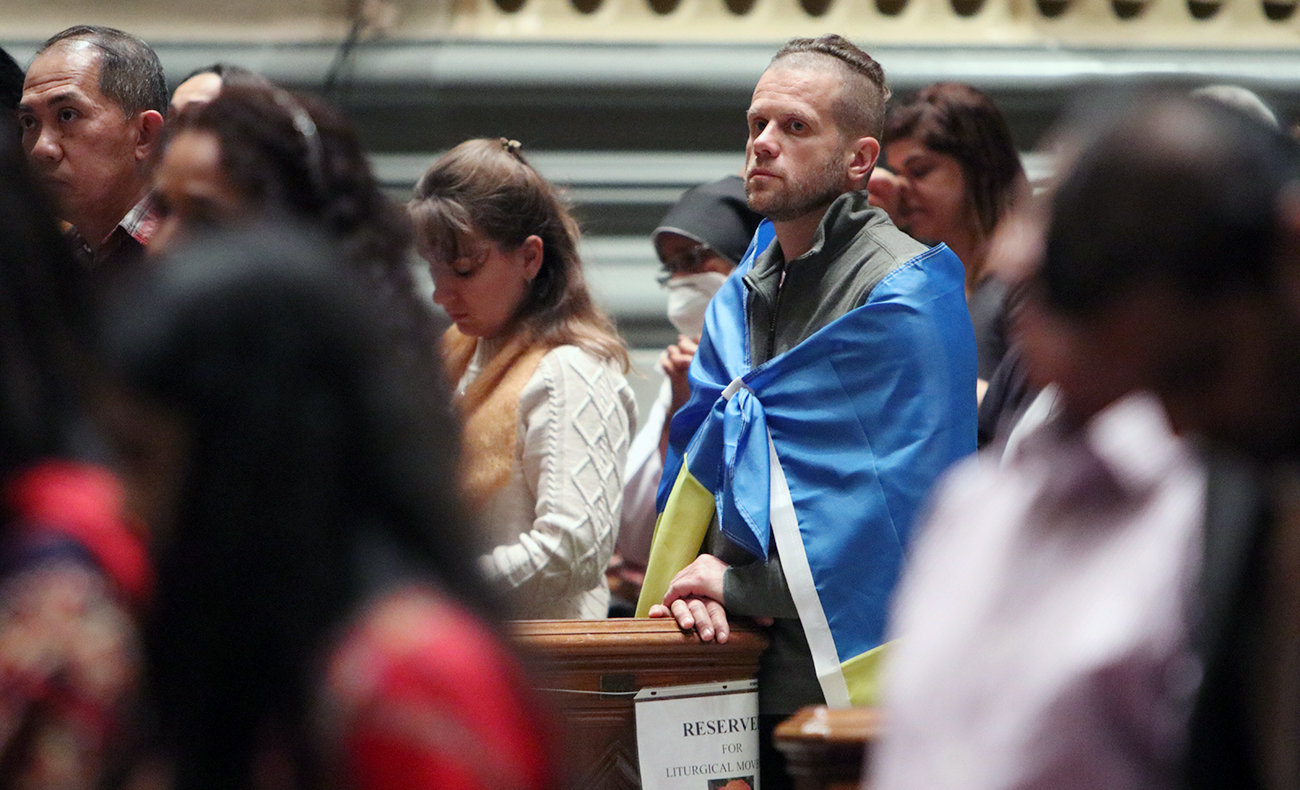 Anatoliy, a member of the Archeparchy of Philadelphia Ukrainian Catholic community, stands draped with the flag of Ukraine during the March 12 Cultural Heritage Mass at the Cathedral Basilica of SS. Peter and Paul. (Sarah Webb)

In his post-Communion remarks, Father Pitula said he was grateful to “share this altar with all the people of God,” and thanked Archbishop Pérez for that opportunity on behalf of Archbishop Borys Gudziak, the Ukrainian Catholic archbishop of Philadelphia and the head of external relations for the worldwide Ukrainian Catholic Church.

“We are all brothers and sisters in Christ, and we are supposed to live in harmony, but that’s what we lack now in Ukraine,” said Father Pitula, noting that he chose to wear red vestments to symbolize “the blood that is (now being) shed” in his homeland.

Since Russian forces invaded Feb. 24 – eight years after annexing Ukraine’s Crimean Peninsula and backing the separatist Donetsk and Luhansk territories in Ukraine’s east – more than three million Ukrainians have been forced to flee their nation. Thousands of soldiers and civilians – children, pregnant women and elderly among them – have been killed as Russian forces have targeted residential areas, schools, hospitals and humanitarian corridors.

Father Pitula said he was thankful for “all the nations, all the countries, all the religious and ethnic groups who supported and were united with (his) beloved Ukraine,” and urged them: “Please don’t cease the prayer, but pray to cease the war.”

Attendee Tetyana Mykich, a parishioner at St. Michael the Archangel Ukrainian Catholic Church in Jenkintown, said “just knowing so many people are praying” for her native Ukraine “is inspiring.”

“We are (a) country that is standing up against literal evil,” she said. “And now we have our biggest weapon: faith.”

Cathedral Basilica rector Father Dennis Gill said “we are no less the human community when we are divided in ways by the world,” and that believers in Christ are joined in a “great solidarity.”

The cultural expressions of that belief can differ, even to humorous effect, said Archbishop Pérez, noting that in some countries “Mass goes on for hours,” while Americans favor a “microwave Mass” with a quick homily.

Yet while “faith and culture are inseparable,” he said, “what brings us together is not really our culture – it’s that altar … the altar that represents Christ.”

The archbishop said the March 12 Mass mirrored the true body of Christ.

“When God looks upon the church, this is actually what he sees: people from different countries and languages and cultures,” he said.

The church is “in many ways a master of bringing cultures together,” said the archbishop, who began his homily by leading those present in praying the Hail Mary for Ukraine. “Though the Catholic Church has one faith, it … takes flesh in different countries.”

Culture is “a gift from God,” who “made us all alike but different,” he said, exhorting parents to “make sure your little ones learn your language and your culture. … Be proud, be joyful, be blessed.” 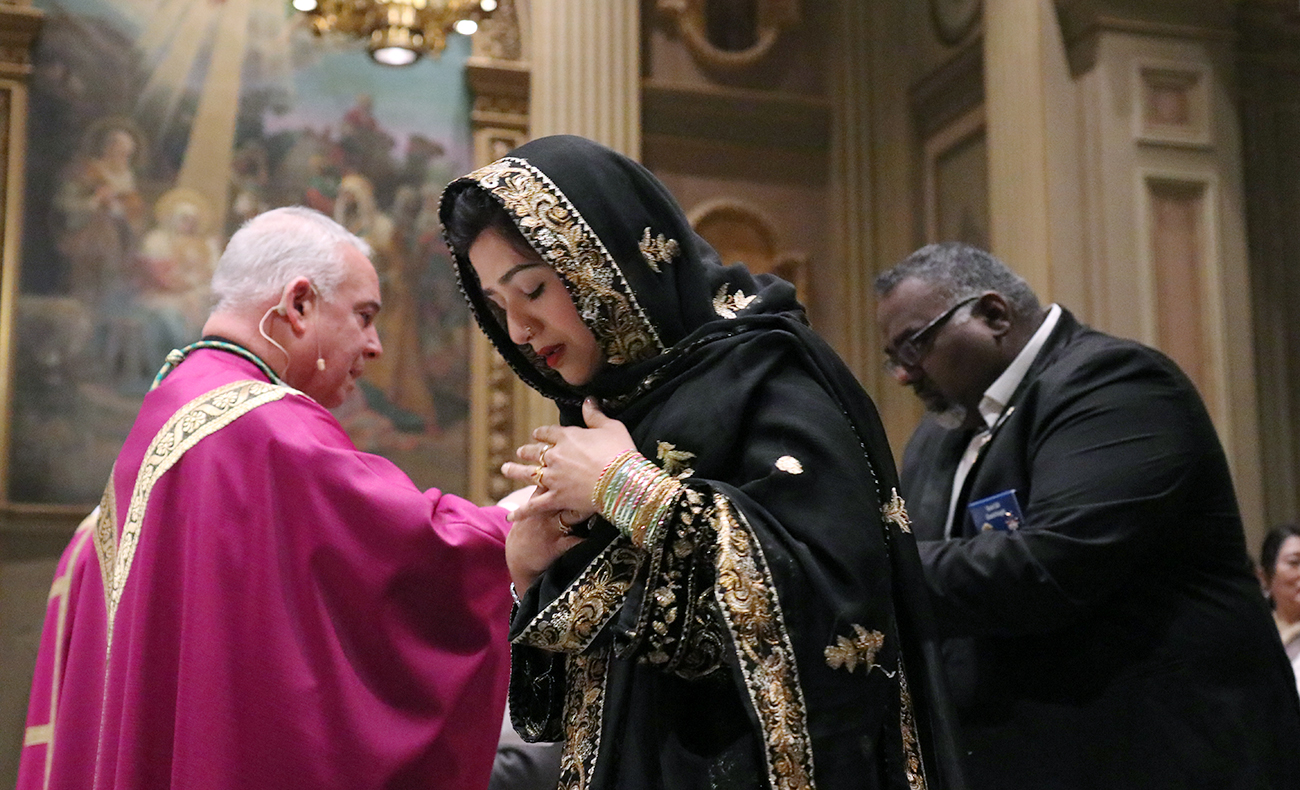 A woman from the Philadelphia Archdiocese’s Pakistani Catholic Community bows after receiving holy Communion from Archbishop Nelson Pérez during the March 12 Cultural Heritage Mass at the Cathedral Basilica of SS. Peter and Paul. (Sarah Webb)

NEXT: Parishes raising prayers for peace, money for Ukrainians