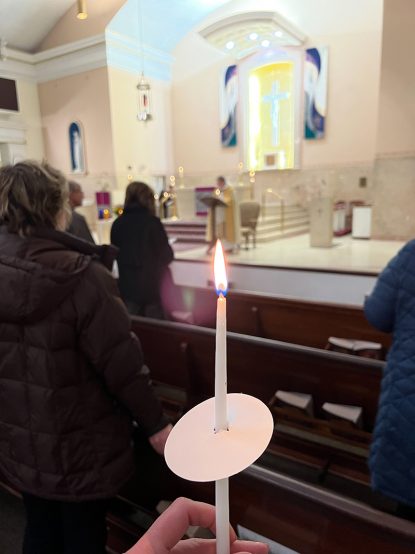 Parishioners of St. Anastasia Parish in Newtown Square participate in a Candlelight for Vigil for Peace on Sunday, March 20. (Photo by Nicole Schmitt)

Parishes in the Archdiocese of Philadelphia continue to pray for peace in Ukraine and support the millions of Ukrainians affected by the invasion of Russian forces since Feb. 24.

More than 3 million residents have been forced to flee the country from the onslaught that has killed thousands of Ukrainian soldiers and civilians, and displaced thousands more.

In response, parishioners of Queen of Peace Parish in Ardsley have donated $3,600 to the humanitarian relief effort in conjunction with St. Michael the Archangel Ukrainian Catholic Church in Jenkintown.

Members of St. Teresa of Avila Parish in Norristown gathered prayerfully for a eucharistic holy hour Tuesday evening, March 15. Father Jerome Wild, pastor, presided at a liturgy of the Word and adoration of the Blessed Sacrament, culminating in benediction. (Watch the video here.)

In his homily he cited Pope Francis’s encyclical “Fratelli Tutti” (“On Fraternity and Social Friendship”) in which the pontiff decried the effects of war.

“Every war leaves our world worse than it was before,” Pope Francis wrote. “War is a failure of politics and of humanity, a shameful capitulation, a stinging defeat before the forces of evil. Let us not remain mired in theoretical discussions, but touch the wounded flesh of the victims.

“Let us look once more at all those civilians whose killing was considered ‘collateral damage.’ Let us ask the victims themselves. Let us think of the refugees and displaced, those who suffered the effects of atomic radiation or chemical attacks, the mothers who lost their children, and the boys and girls maimed or deprived of their childhood. Let us hear the true stories of these victims of violence, look at reality through their eyes, and listen with an open heart to the stories they tell.

“In this way, we will be able to grasp the abyss of evil at the heart of war. Nor will it trouble us to be deemed naive for choosing peace” (no. 261).

Father Wild prayed for an end to the war in Ukraine and that the suffering of people there may “water the seeds of peace.”

The liturgy included the meditative chanting of two Taize hymns by the approximately 40 faithful gathered in the church, and included intercessory prayers for the Ukrainian and Russian soldiers engaged in the conflict.

Earlier this week St. Anastasia Parish in Newtown Square held a candlelight vigil service for peace Sunday evening, March 13. Originally planned to take place outdoors at the parish’s shrine to the Blessed Mother, it was moved inside the church due to the weather.

More 150 parishioners and guests from the Delaware County community gathered to offer prayers and songs for peace.

Prayers were offered for peace in the world — especially in Ukraine – as well in the United States, in Philadelphia and local communities, in families and in the hearts of all.

Attendees prayed for the intercession of Mary, and joined in a Litany of Peace. Father Brandon Artman, parochial vicar at St. Anastasia, offered Pope Francis’ Prayer for Peace. 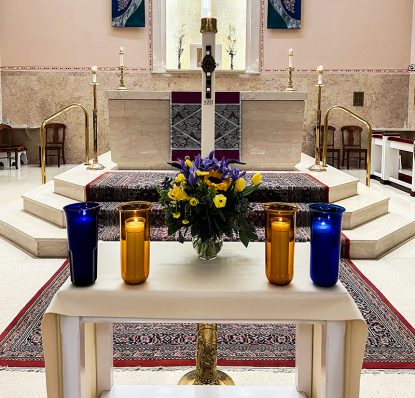 A display at St. Anastasia Church in Newtown Square reminds visitors to pray for peace in Ukraine. (Photo by Nicole Schmitt)

St. Catherine of Siena Parish in Horsham is calling on anyone who enjoys singing to join a Sing for Ukraine event Sunday, March 20.

But all singers are invited at 2 p.m. to rehearse a group performance of “Prayer for Ukraine” — the traditional Ukrainian national anthem — in Ukrainian.

Interested singers should visit https://www.bmcchorus.org/and click on “Support Ukraine” to download sheet music and practice one’s part prior to the start of the program at 3 p.m.

The event will be held outdoors in a field on the parish campus, located at 317 Witmer Road in Horsham. All are invited to wear blue and gold in support and solidarity with the people of Ukraine. Contact choir director William Naydan for more information at naydanw@arcadia.edu.

The youth ministry of Mary, Mother of the Redeemer Parish in North Wales will host a eucharistic Holy Hour for Peace on Sunday, March 27 from 7 to 8 p.m. in the church. Students will provide support ribbons for all who attend.

The parish’s Works of Mercy Club will lead a rosary to Our Lady of Fatima via Zoom on the 24th of each month for six months at 7 p.m. The club chose the 24th since the Russian invasion of Ukraine began Feb. 24.

The parish also is actively raising funds for relief of the humanitarian crisis that is unfolding as a result of the invasion.

MMR Boy Scout Troop #547, in collaboration with St. Anne Ukrainian Catholic Church in Warrington, is leading a collection of personal hygiene items and warm clothes to be sent to Ukraine. All donated items should be brought to the parish center or the school by March 20. Contact Beverly Banks at bevbanks308@gmail.com for more information.

MMR School’s Project Peace Club ran a bake sale March 17 to support the U.S. bishops’ national collection for Aid to the Church in Central and Eastern Europe – specifically ear-marked to help the people of Ukraine.

That collection is to be taken up as well at all parish Masses at MMR the weekend of March 26-27.

The parish’s Knights of Columbus council and the Works of Mercy Club will team up to donate proceeds from MMR’s April 1 Fish Fry event to benefit the national collection. 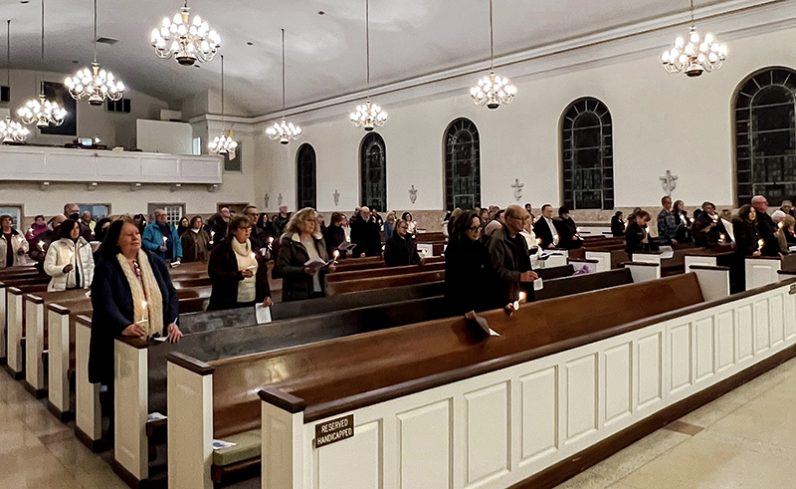