‘Dwell in the possibilities’ created by disability, says advocate 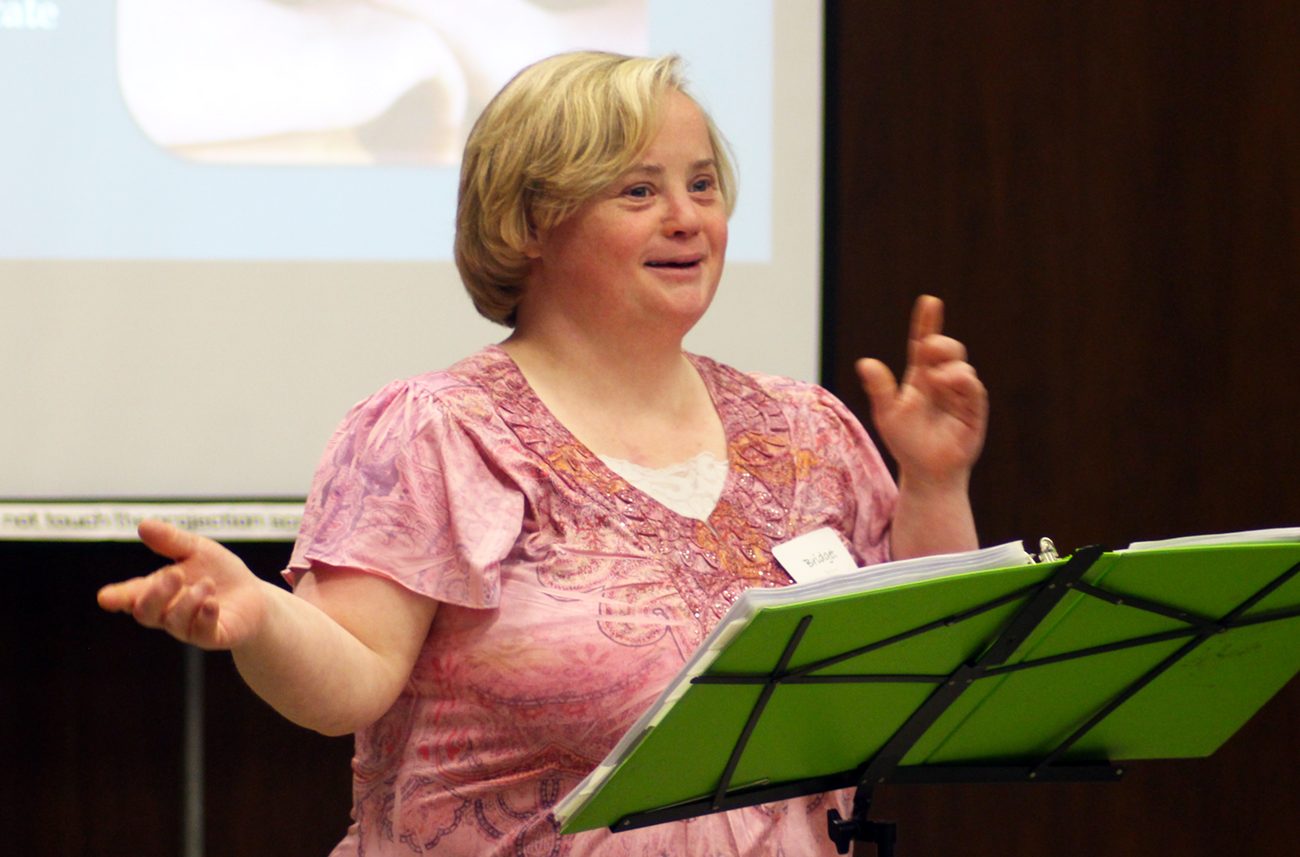 Bridget Brown, an international advocate for persons with Down syndrome, delivered several presentations within the Philadelphia Archdiocese as part of World Down Syndrome Day, March 21. (Gina Christian)

Students and pastoral leaders in the Philadelphia Archdiocese marked World Down Syndrome Day (March 21) by hearing from a leading inclusion advocate, who encouraged her audiences to “dwell in the possibilities” created by the condition.

Bridget Brown, co-founder of the organization Butterflies for Change, addressed the groups during sessions held at the Archdiocesan Pastoral Center March 19 and again on March 21 at St. Katharine of Siena School in Wayne and Archbishop John Carroll High School in Radnor.

The school gatherings were sponsored by the Rising Together Alliance, a partnership of parents and educators that works to ensure children with intellectual disabilities have access to Catholic education at their local parochial schools. The archdiocesan Office for Persons with Disabilities and the Deaf Apostolate, under the direction of Immaculate Heart of Mary Sister Kathleen Schipani, organized the pastoral center seminar.

Officially observed by the United Nations since 2012, World Down Syndrome Day falls the 21st day of the third month to signify the triplication, or trisomy, of the 21st chromosome, which causes the condition.

During her presentations, the 35-year-old Brown detailed her experiences as a trailblazing young woman with Down syndrome. The Illinois native was the first student to be mainstreamed into her school district’s classes. Now enrolled at the University of Illinois at Chicago, Brown counts among her career highlights numerous public speaking engagements, Special Olympics competitions and appearances, and several television and film roles.

In 2017, Brown traveled to Rome with Sister Kathleen for consultations at the Vatican on pastoral inclusion of persons with disability.

“Pope Francis blessed me, and I blessed him,” Brown quipped at her March 19 talk.

Four years ago, Brown posted a YouTube video of her open letter to Iceland, lamenting that nation’s high rate of abortions following pre-natal diagnoses of Down syndrome.

“I do not ‘suffer’ from Down Syndrome. I am filled with joy to be alive,” she said in the video. “I believe in the sacred dignity of all people. And most people with disabilities have full and productive lives — just like me.”

Brown also noted in her message that Hitler had “killed people with disabilities first” during World War II.

Researchers estimate between 250,000 to 275,000 persons with disabilities were murdered under Hitler’s T-4 program, which served as a model for his eventual execution of some six million Jews.

“We are doing the same thing to children with disabilities today,” said Brown in her video. “This is genocide — the systematic killing of a whole people or nation.”

(Related: Listen to a CatholicPhilly.com podcast with Down syndrome advocate Kurt Kondrich.)

Catholic Philly · Inside CatholicPhilly.com: Ending the “Silent Eugenics” Against Persons with Down Syndrome

In stark contrast, “Jesus spent a lot of time with people with disabilities,” Brown said in her March 19 talk, citing the healing of the paralyzed man carried by four men (Mk 2:1-12) as one of her favorite Scripture passages.

She said Jesus likely gave a “smile” and a “thumbs up” to the man’s friends, who circumvented the crowd by lowering their companion through the roof.

“That is what we are supposed to be” for those with disabilities, she said.

Brown stressed that her deeply held faith inspires her mission and ministry.

“I don’t just worship God; I bring my faith with me (everywhere),” she said.

While it has made progress in embracing those with disabilities, Brown said the Catholic Church “still has a long way to go.”

“Some churches are awake and alive spiritually, but some are not,” she said. “Inclusion doesn’t just happen; you have to plan for it.”

The first step is recognizing that “all people have dignity and gifts,” said Brown. “All means all. … We need to dream big, starting in our own churches.”