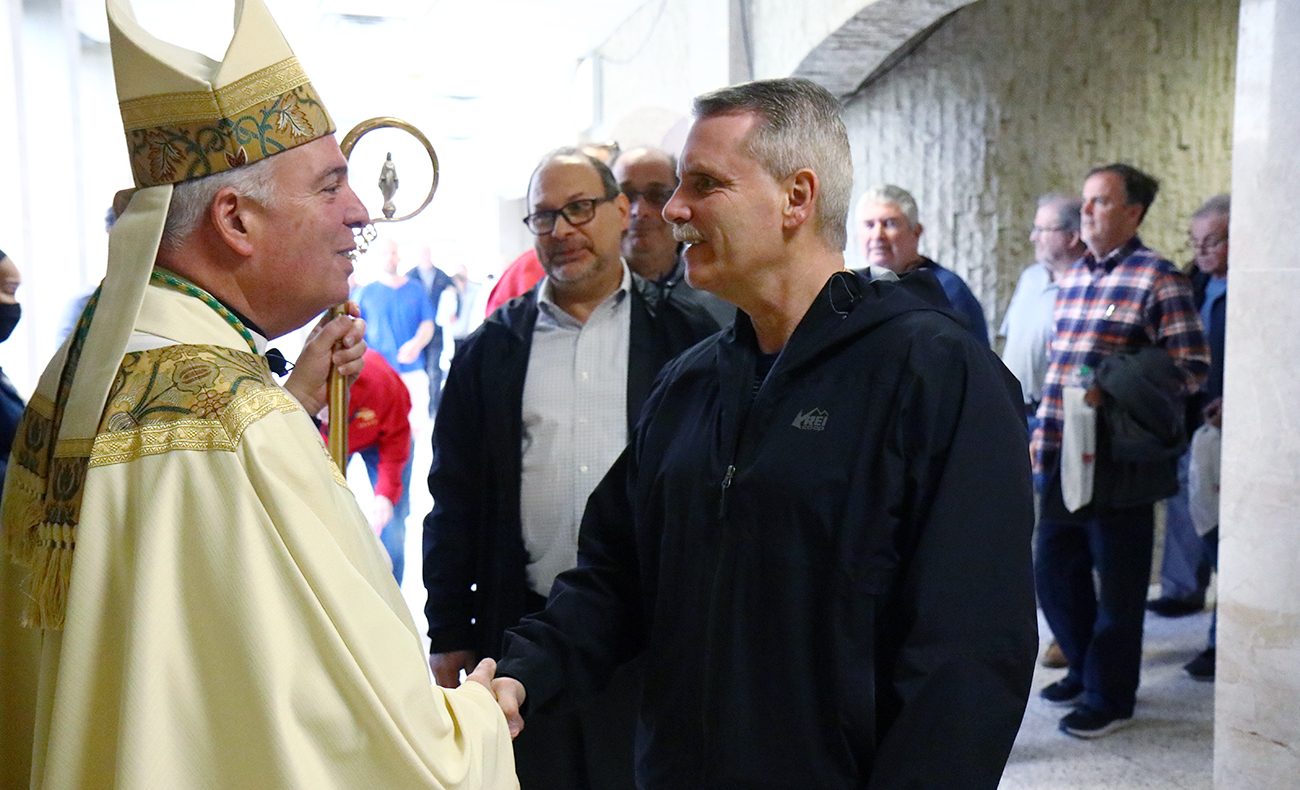 In 2002, five men came together to talk about the Gospel, and the Gospel Reflection Group they formed brought hundreds of men together from various parishes. It not only provided men an opportunity to share thoughts on God’s word, but to improve themselves in their everyday lives.

Six years later, laymen and clergy of the Archdiocese of Philadelphia, spearheaded by Auxiliary Bishop Robert Maginnis and including Cardinal Justin Rigali, the archbishop at the time, formed Man Up Philly.

Last Saturday morning during conference registration, the sacrament of penance was offered by priests for any of the men to start the day with confessions. Afterward Deacon James Mahoney delivered a morning prayer. The prelude song was “Stand by Me,” a reminder for people to keep moving onward regardless of circumstances.

Deacon Harold Burke-Sivers, a world-recognized Catholic speaker, referenced the Babylonian exile as told in the Book of Daniel. The Israelites began to adopt the pagan lifestyle of Babylon and forgot about God.

Deacon Burke-Sivers noted a similar effect on people today, particularly the young, as the tools we use including cell phones, social media and video games are not our life. We need our faith, he suggested, and we cannot keep it to ourselves but must share it with others.

“Our job is to lay a foundation on which this house will be built for our young people,” said Deacon Burke-Sivers.

He pointed to the Eucharist as a sign that God is always with his people and he fights with us and for us, but people must also be proactive in the battles of life. “We have to get out in front of issues,” said Deacon Burke-Sivers. “Be strong-hearted. Wait for the Lord.”

Following a talk by Frank Mita on how to prepare to receive the sacrament of reconciliation, many went to confession before or after lunch.

“Confession takes humility,” said Mita. “It is good for the soul.”

Father David Friel, director of Vocation Office for Diocesan Priesthood, spoke with optimism that men would “heed the call” and respond to a vocation in the priesthood or permanent diaconate. Just as St. Joseph cared for Jesus and Mary as the angel of the Lord commanded him, men can model Joseph as a good listener and strong leader.

“We need husbands and fathers who can be like Joseph,” said Father Friel. “We need priests who can listen and heed. We have good young men coming forth to be priests.”

Deacon Hank Fila of St. Norbert Parish in Paoli shared his own road to the permanent diaconate in the Philadelphia Archdiocese. He drove by Immaculata University each day, and eventually asked what time the weekday Mass there took place.

He started attending as often as possible and developed a relationship with one of the Sisters, Servants of the Immaculate Heart of Mary. She asked him if he had any interest in becoming a deacon but he was already 52 years old at the time and the age limit was 50. But when that limitation changed two years later, he believed it confirmed his call to the diaconate and he responded.

“Open your heart to the Lord,” said Deacon Fila. “We all have a vocation. We’re all called to service.”

Pat Chambers, newly hired men’s basketball head coach of Florida Gulf Coast University, talked about his faith from growing up to raising his own family to pursuing his coaching career.

Chambers was raised as the youngest child in a family of 12 children where he always felt unconditional love from his parents and siblings. He played basketball in his driveway, an early foundation of his future coaching career.

His mom prayed the rosary every day and his dad attended daily Mass, frequently taking the kids. Getting ready for church was always a task with 12 children, but it was an enjoyable one, from getting washed up to dressing in their Sunday best.

“It was an event around church,” said Chambers. “It was the greatest thing ever.”

Today Chambers and his wife, Courtney, are raising four children of their own. He continues the same practice of faith with his own family that he himself grew up with. Sports are a common part of the lives of many young families, and Chambers acknowledged that sometimes sports end up taking the place of practicing the faith.

“Faith needs to be at the forefront,” he said.

Chambers spent a decade in the pharmaceutical and printing businesses but he felt a void in his life. After spending additional time in prayer, he received a call from Villanova University head men’s basketball coach Jay Wright and was named an assistant coach for the team before being promoted to associate head coach there in 2008.

Chambers spent two seasons as head coach at Boston University before moving on to Penn State University in 2011 where he remained head coach until the COVID-19 pandemic shut down the NCAA season on March 13, 2020.

Twenty months later in November 2021, Chambers continued coaching as a special assistant at La Salle University under head coach Ashley Howard. Exactly two years after the day that the NCAA was cancelled, Chambers learned he would resume his head coaching duties, this time at Florida Gulf Coast. That call came on March 13, 2022.

“I’m so blessed and so grateful,” said Chambers.

Archbishop Nelson Perez concluded the conference by celebrating Mass with all the men on St. Joseph’s feast day. 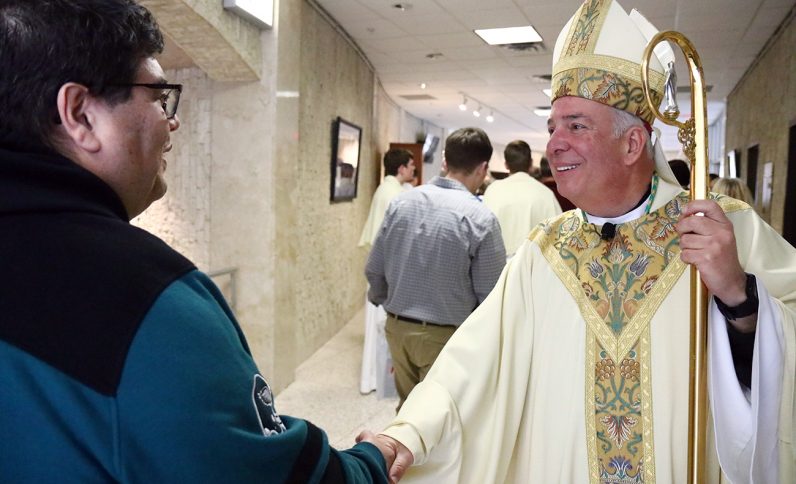 PREVIOUS: Join in moment of prayer for humanity March 25

NEXT: Archbishops lead Catholics in consecrating humanity to Mary