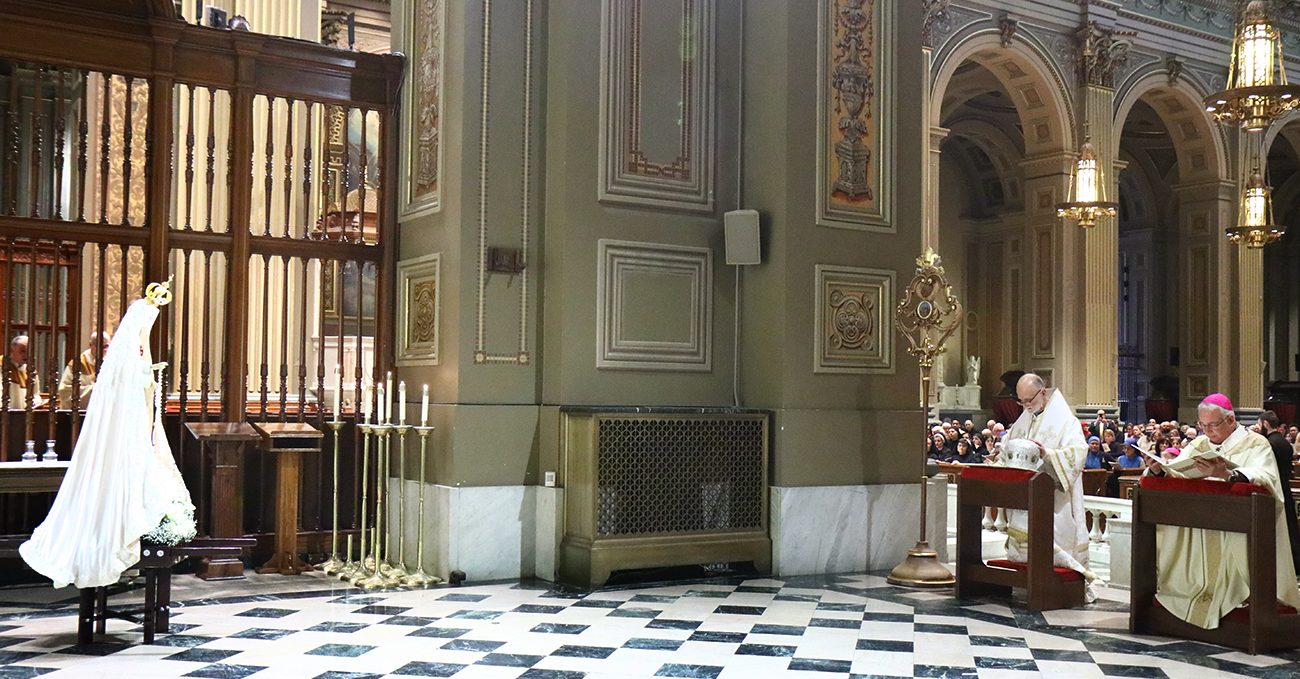 Leading the consecration to the Immaculate Heart of Mary for all humanity, and especially Ukraine and Russia, are Archbishop Borys Gudziak (left) of the Ukrainian Catholic Archeparchy and Archbishop Nelson Perez of the Archdiocese of Philadelphia, in union with the clergy and faithful gathered March 25 in the Cathedral Basilica of SS. Peter and Paul, Philadelphia. (Photo by Sarah Webb)

Hundreds of faithful filled the Cathedral Basilica of SS. Peter and Paul in Philadelphia March 25 to participate in the universal church’s consecration of Ukraine, Russia and all humanity to the Immaculate Heart of Mary, as requested by Pope Francis earlier this month.

Philadelphia Archbishop Nelson Pérez and Archbishop Borys Gudziak, metropolitan archbishop for Ukrainian Catholics in the U.S., led the act of consecration, uniting with the pope, bishops and priests worldwide as they did the same at 5 p.m. Rome time.

The text of the consecration prayer (in English and Spanish), which implores Mary’s intercession while lamenting human sinfulness, was issued by the Vatican earlier this week.

Cardinal Konrad Krajewski, the papal almoner, performed the consecration at the Shrine of Fatima in Portugal, where Mary appeared to three young seers from May to October 1917. In a July 1917 vision, she promised to “come to ask for the consecration of Russia” to her Immaculate Heart to prevent that nation from “(spreading) her errors throughout the world, causing wars and persecutions of the church.”

Pope Francis had announced the consecration on March 15 in response to a request from the bishops of Ukraine, where Russian military forces have killed thousands and have displaced more than 10 million in total since the Feb. 24 invasion of Ukraine.

Some three dozen clergy of both the Roman and Byzantine Catholic rites concelebrated Mass with Archbishop Pérez and Archbishop Gudziak immediately following the consecration, which Pope Francis set to coincide with the Solemnity of the Annunciation of the Lord.

The feast marks what in Byzantine tradition is known as “the day of the beginning of salvation,” when “the Son of God (became) incarnate through the Holy Spirit and the humility of his divine Mother,” said Archbishop Gudziak, who preached the homily for the liturgy.

The need for Christ’s redemption has been underscored by the suffering from the war in Ukraine, he said. 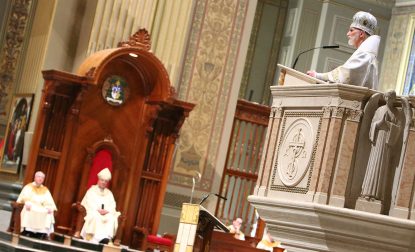 Archbishop Borys Gudziak (right), head of all Ukrainian Catholics in the United States, preaches the homily at Mass for the feast of the Annunciation, March 25, in the Cathedral Basilica of SS. Peter and Paul, Philadelphia. Philadelphia Archbishop Nelson Perez listens at left. (Sarah Webb)

“Things are clear,” said Archbishop Gudziak. “The danger of evil, the will of the enemy of mankind, the frailty of our human nature is starkly before our eyes.”

Pregnant women, infants and children are among the thousands of casualties, while close to 3.5 million Ukrainian refugees have fled to neighboring European Union nations.

He admitted that he himself has struggled to pray for Russian persecutors amid that nation’s brutal assaults on Ukrainians.

“I’ll be frank with you in expressing some of the concerns of the people of Ukraine. Some (ask), ‘How can you put the rapist and the one being raped in the same room?’ … I’m speaking about myself,” said Archbishop Gudziak.

Yet such forgiveness is “the spiritual height to which this moment calls us,” he said.

Amid the horrors of the war — which is “morally clear” in favor of Ukraine — “we’ve seen God’s grace at work,” said the archbishop. 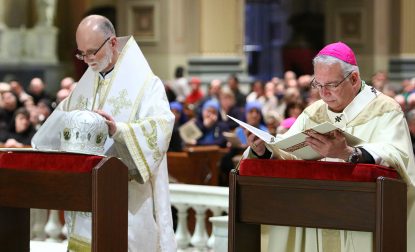 Metropolitan Archbishop Borys Gudziak (left), head of all Ukrainian Catholics in the United States, joins Archbishop Nelson Perez of the Archdiocese of Philadelphia in reciting the prayer of consecration to the Immaculate Heart of Mary in union with all the world’s bishops and faithful for all humanity, especially Ukraine and Russia, March 25 in the Cathedral Basilica of SS. Peter and Paul, Philadelphia. (Sarah Webb)

Pointing to the global outpouring of support for Ukraine, Archbishop Gudziak said he believed “never in human history have people of goodwill around the globe been so united.”

“Ukraine has united the world,” he said. “Ukrainians are demonstrating the greatest love that we see defined by our Lord in John 15:13: ‘There is no greater love than when one gives one’s life for his friends.’”

Mary is a model for following Christ’s command, said Archbishop Gudziak, quoting a passage from the consecration that noted she had “opened the doors of history to the Prince of Peace.”

In a video announcing his participation in today’s dedication, Archbishop Gudziak said Ukraine has been consecrated to Mary many times throughout its long “spiritual history.”

The current war in Ukraine marks “a turning point in history (that) will be transformational,” but comes “at great cost,” said Archbishop Gudziak. “Always, the real resurrection requires the cleansing of the cross, and we carry it together.”

In his post-Communion remarks, Archbishop Pérez thanked Archbishop Gudziak “for reminding us that the Christian heart is a heart that can find hope in the middle of despair.”

That hope is centered firmly in Christ’s triumph over sin and death, he said.

“All of us are in a moment of despair, but the story doesn’t end here,” said Archbishop Pérez. “It ultimately ends at the Resurrection.” 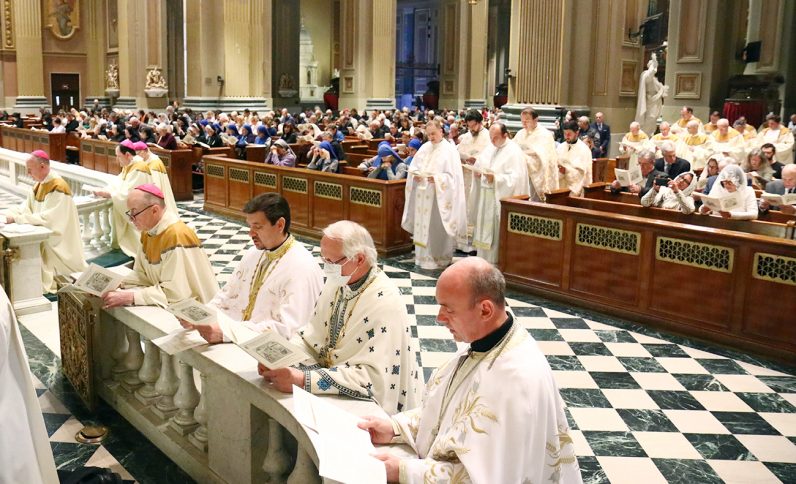 Clergy from the Latin and Byzantine Catholic rites join with the religious and lay faithful March 25 in the Cathedral Basilica of SS. Peter and Paul, Philadelphia to pray the Act of Consecration to the Immaculate Heart of Mary, together with Pope Francis in Rome and all bishops, clergy and people of God for peace in Ukraine and Russia. (Sarah Webb)

PREVIOUS: Man Up Philly brings Catholic men out for day-long meet up