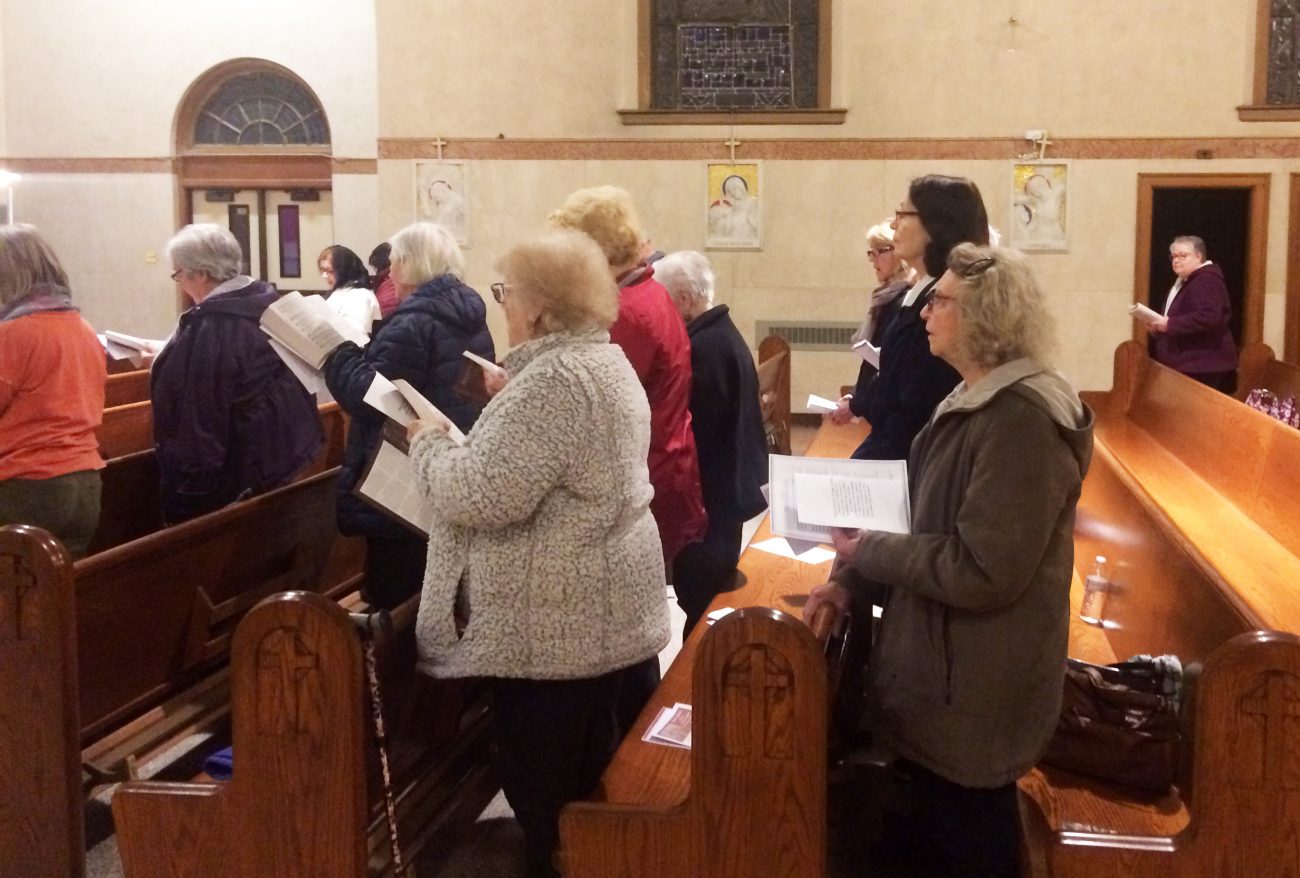 Some of the approximately 90 participants in the first of five Lenten talks at rotating parishes in the Ridley area of Delaware County pray together March 1 at St. Gabriel Church, Norwood. (Photos by Dan McCarty)

Five Catholic parishes in the Ridley area of Delaware County have resumed a Tuesday evening Lenten series this year — with in-person participation after a pandemic-induced hiatus in 2020 and last year.

“The Sacraments” is the theme for a presentation featuring a speaker who focuses on one or two of the sacraments rotating in the parishes each Tuesday in Lent.

The five-week series offers a way to unite local Catholics, especially after the last two years of livestreamed events and limited in-person liturgies.

“It’s nice to see all the churches that hold something,” said Barbara Garttmeier, a parishioner of Our Lady of Fatima in Secane.

The series began March 1, the day before Ash Wednesday, at St. Gabriel Church in Norwood. Father David Fisher, an adjunct faculty member at St. Charles Borromeo Seminary in Wynnewood, talked about the sacrament of confirmation.

The evening included a welcome by Father John Hand, parochial administrator of St. Gabriel; prayer in word and song; a reading from St. Paul’s Letter to the Colossians and Father Fisher’s talk.

“It’s good to start it off,” said Father Hand. “It can’t hurt to hear about the sacraments. It can only help us.”

Father Hand mentioned how he always urges his parishioners to focus on the positive during Lent, not the negative. He recommends choosing a particular vice one may struggle with, working with it daily and continuing to do so throughout the Lenten season.

“See if you can turn it into a virtue,” he suggested. 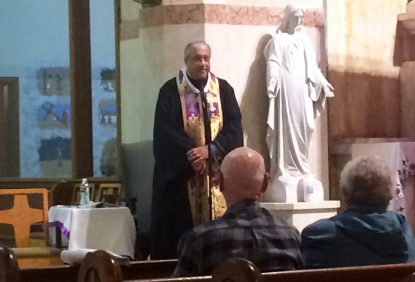 Father David Fisher, a Maronite priest, author and professor at St. Charles Borromeo Seminary, speaks to the group assembled at St. Gabriel Church, Norwood March 1 for his Lenten-series talk on the sacrament of confirmation and its roots in the Eastern and Western Christian traditions.

Father Fisher, a Maronite Catholic priest, spoke of his background. He studied at the Pontifical Gregorian Institute in Rome and in 1984 was ordained by Pope John Paul II in St. Peter’s Basilica. He taught at Columbus State (Ohio), Xavier University (Cincinnati) and the University of Dayton before making his way to St. Charles Seminary.

A year ago, he published the book “Speak Lord for Your Servant is Listening: Reflections in Sacred Scripture.”

He explained how, according to the Catechism of the Catholic Church, the sacrament of confirmation along with baptism and Eucharist constitute the sacraments of initiation. Through confirmation the baptized become fully initiated into the church and filled with the Holy Spirit. As true witnesses of Christ, it is their duty to practice their faith through prayer and good deeds for others.

Father Fisher explained that in the early church, confirmation and baptism constituted one celebration. Therefore it was considered a “double sacrament,” according to St. Cyprian.

As the Christian communities grew in time and more parishes were founded, it became increasingly difficult for bishops to preside at all baptisms in their respective dioceses.

In the development of the church’s eastern and western traditions, the latter wanted the bishop to remain the ordinary minister of confirmation and so the two sacraments were conferred separately. The eastern church kept the celebration of the two sacraments together, so that the baptizing priest also confirms.

Another western tradition of the Catholic Church is a double anointing with sacred chrism following baptism. In the baptismal rite, the first anointing is conferred by the priest when the person – either a child or an adult — comes out of the baptismal holy water. Later the bishop anoints the forehead of the person at confirmation. 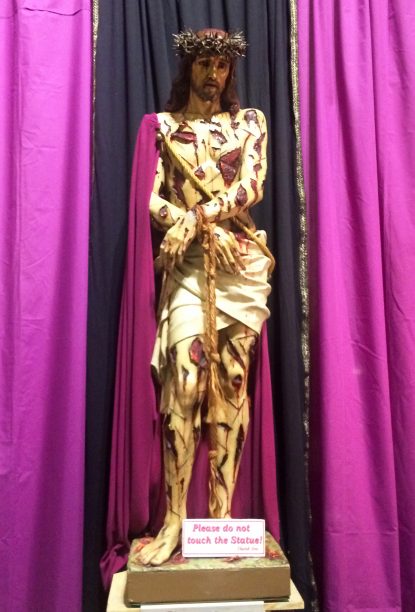 St. Gabriel Church, Norwood displays its statue of the scourged Jesus during Lent.

In the West, baptism and confirmation are separated by many years for those baptized as Catholics shortly after birth. In the Eastern Orthodox and Eastern Catholic Churches, the sacraments of initiation to this day are administered together.

Father Fisher cited two Scripture passages that refer to the sacrament of confirmation, or “Chrismation,” the sacrament that with baptism initiates new members into the church. They are Acts of the Apostles, 8:14-17, 9:17, 19:6; and St. Paul’s Letter to the Hebrews, 6:1-2.

Both mention the laying on of hands by the Apostles and their successors as the act of receiving the Holy Spirit. The Letter to the Hebrews tells us that repentance, faith, baptism, confirmation, resurrection and judgment all serve as aides through the Christian journey toward heaven.

“Therefore,” says Hebrews, “let us leave behind the basic teaching about Christ and advance to maturity, without laying the foundation all over again: repentance from dead works and faith in God, instruction about baptisms and laying on of hands, resurrection of the dead and eternal judgment.”

Father Fisher concluded with the reminder that in confirmation, the candidate is “sealed with the gift of the Holy Spirit,” which means that the person now belongs completely to God.

A total of 91 people attended the March 1 talk for the start of Lent and several of them found Father Fisher to be quite informative. Sue Smith, a member of St. Rose of Lima Parish in Eddystone, came with a group of six friends to renew her faith.

“It’s a good way to start Lent,” said Susan Gallagher, a parishioner of St. Madeline in Ridley Park. “I need to step away from all the busyness. He was really informative.”

The Lenten series continues March 8 at St. Francis of Assisi in Springfield. Kelly Anderson, associate professor at St. Charles Borromeo Seminary, will focus on the Eucharist. 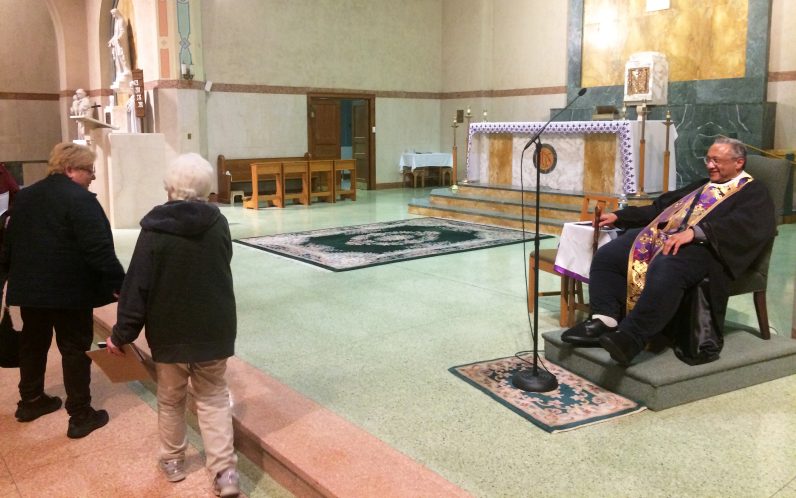 PREVIOUS: ‘One Can Meal Drive’ tackles hunger, one serving at a time

NEXT: Faithful unite in five-hour prayer vigil for Ukraine