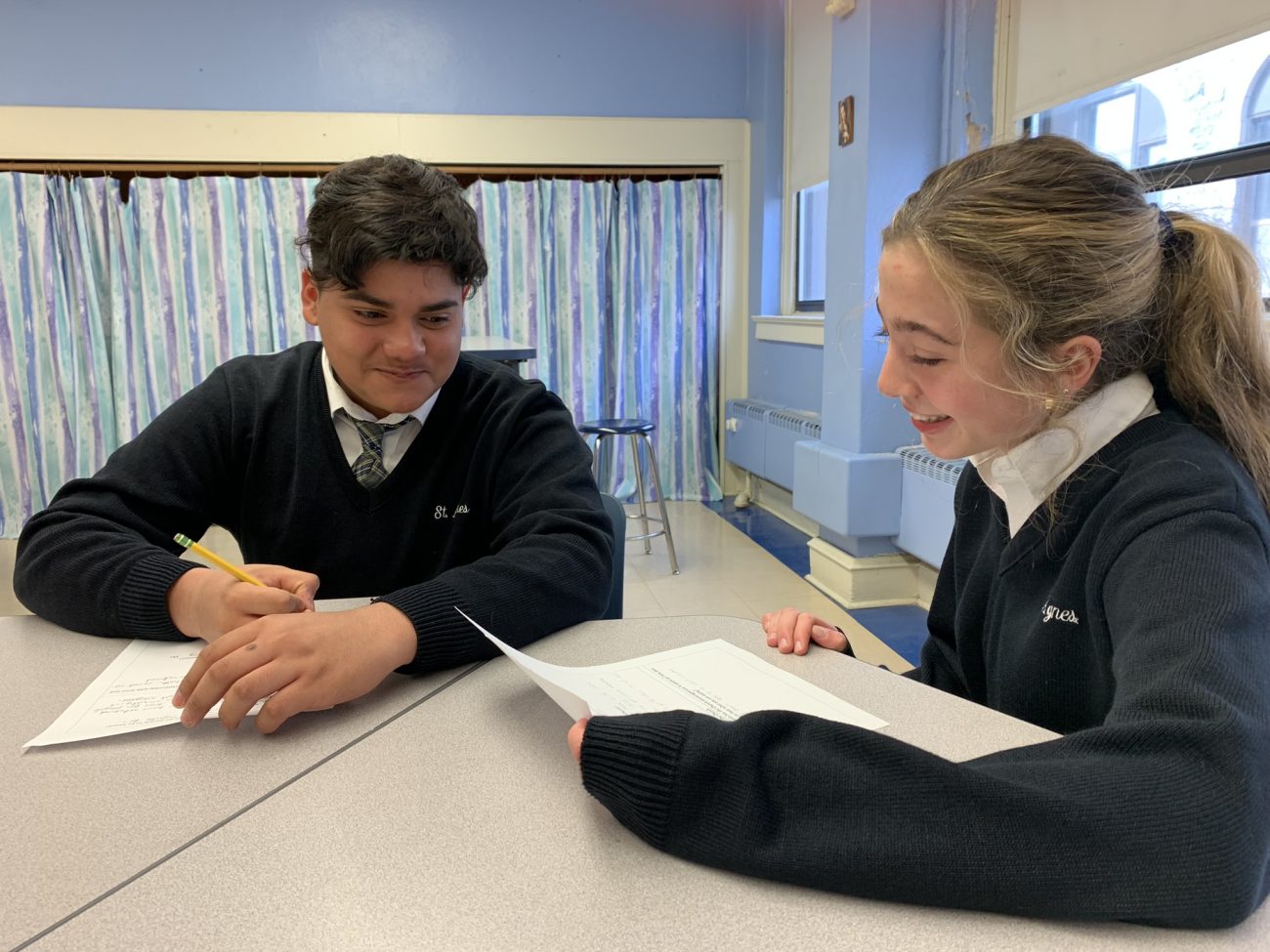 Kevin Rivas and Lily Ciccarone, both eighth-grade students at St. Agnes School in West Chester, shared their thoughts on the Catholic Church during a March 22 synod listening session held in their religion class. (Gina Christian)

Students at a Chester County Catholic school are looking to share their thoughts on the church with Pope Francis, as part of the two-year Synod on Synodality.

Over the past week, the sixth, seventh and eighth grades at St. Agnes School in West Chester have been holding their own synod listening sessions, modeled after the regional gatherings taking place in the Philadelphia Archdiocese.

During religion classes, students have been prayerfully reflecting on the key questions of the synod’s diocesan phase, listing their joys and concerns about the church, as well as the ways in which it engages youth.

“I think it’s pretty cool we’re getting to do that a very young age,” said eighth grader Kevin Rivas, who admitted he was “surprised” that the students were asked for their input.

The synod process in the archdiocese is part of the worldwide preparations for the 15th Ordinary General Assembly of the Synod of Bishops at the Vatican in October 2023.

Launched by Pope Francis in October 2021, the two-year synod is organized around the theme of “communion, participation and mission.”

In the Philadelphia Archdiocese, local listening sessions were announced in February by Msgr. Brian Hennessy, pastor of St. Alphonsus Parish in Maple Glen and coordinator for the archdiocesan phase of the synod. Volunteer facilitators for the gatherings have been trained by the Malvern-based Catholic Leadership Institute (CLI), with session results to be compiled into a report by June for submission to the Vatican.

The students’ voices are a vital part of the global conversation, said St. Agnes School principal and Immaculate Heart of Mary Sister Michele Smith, who has been leading the classroom sessions with fellow Sister Rose Patrice Kuhn, the parish’s synod facilitator and director of Hispanic ministry.

“I have taught (the students) that they are the church, and that the church can’t exist without them,” said Sister Michele. “At the same time, they need to be able to lean on the church.”

When the archdiocesan phase of the synod was announced, Sister Michele said she first notified parents to explain the process and to invite their feedback.

After conversations with Sister Rose, she decided to consult students as well – especially since both kids and parents had “pulled away from the church” after two years of COVID-related social distancing, she said.

“We recognized that right away when we brought the children back to school,” said Sister Michele. “There was something missing. They didn’t respond in church, because … when you’re home watching (Mass) on television, you don’t have to be (as) involved. … We needed to do something to get them involved again and get them excited about church.”

“We could have kids’ Masses,” said eighth grader Lily Ciccarone. “Maybe there’s a possibility that kids could cantor and read at Mass.”

In their collective responses to synod questions, students at the March 22 session expressed concerns about lackluster participation at liturgies, including “people leaving after Communion and not waiting till Mass is finished,” “phones ringing,” and “people being distracted.”

“We need to do more reading about … what Jesus did for us, how he sacrificed his life for us to wash away our sins,” he said. “That could really encourage us to go to church more, and to bring ourselves to Jesus and the church.”

Rivas’s fellow students agreed, with one group lamenting “how many people listen to the world instead of the Lord,” and “how violent acts can be used (against) the church due to disagreement.”

At the same time, the St. Agnes students remain hopeful about the church’s future.

That exhortation, along with the other insights offered by the students, will be added to the parish synod report, said Sister Michele.

“Sister Rose will take those comments to the archdiocese, and then hopefully (they’ll get) to the Holy Father,” she said.