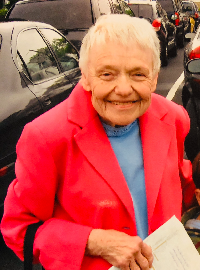 Rita (Crawford) Baldwin died March 10 in Philadelphia, surrounded by her family. She was 89 and a lifelong resident of Philadelphia.

She was born in South Philadelphia in St. Edmond Parish, the only child of Irene (Duffy) and David W. Crawford. She graduated from St. Edmond’s and from West Philadelphia Catholic High School for Girls in 1951, after which she worked for several years at the Bell Telephone Company.

Rita met and fell in love with Lou Baldwin and they were married on May 21, 1960. They were married for 61 years until death briefly separated them on Lou’s passing in October 2021. They were devoted to each other, and she is again reunited with her first and only love.

Rita and Lou settled down to raise a large family of nine children, first in South Philadelphia then in Tacony in Northeast Philadelphia. They were very active members of St. Leo and Our Lady of Consolation parishes, where Rita served as a lector and was involved in RCIA and prayer groups.

Her work in  RCIA was especially important to her because she loved her Catholic faith and introducing it to others. She was also very active in St. Leo School, where she and Lou were volunteer librarians. Rita got tremendous satisfaction and enjoyment from her library service and working with the schoolchildren.

Rita was as devoted to her family as she was her faith.  She doted on her children, many grandchildren and greatgrandchildren. The children loved visiting their grandparents, who loved their visits just as much, right up until their final years. Rita’s calendar was always filled with children’s birthdays, school events, graduations, weddings, and most of all, visits to and from her family.

Rita also had a lifelong love for baseball and loved attending Phillies games with her children and grandchildren. As a girl, she would go to ballgames with her father at Shibe Park, and as a young woman loved to watch Robin Roberts pitch at Connie Mack stadium.

Her passion for baseball continued throughout her life. She was a partial season ticket holder for many years and was well known and loved by many at the ballpark. The fans, staff, ushers and even the Phillie Phanatic all knew Rita in section 234, and they ask about her to this day. It was a special joy for her that she was at Game 5 of the 2008 World Series when the Phillies clinched the title.

When her children were grown, Rita developed a love of travel and with Lou she traveled the country — whether it was close by to the Jersey Shore, a train trip along the California coast, a stay at the Grand Hotel on Mackinac Island, visits to the national parks of the West or further afield to Quebec in Canada, or on pilgrimage to Guadalupe in Mexico. She also went on many trips and pilgrimages to the U.K., France, Italy and Israel.

When Rita was diagnosed with inoperable cancer in early 2021, she told her daughter that she was ready. She had lived a very full life, had seen her grandchildren grow up and had been able to visit all the places and see all the world she had wanted to see. Her family deeply mourns her loss but is glad she is once again reunited with her husband, Lou.