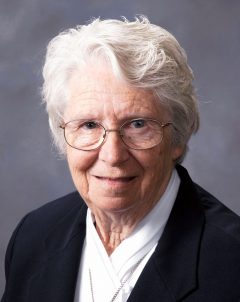 Sister Barbara Maria Bamberger, I.H.M., died April 5 in Paoli Hospital. She was 82 and in the 62nd year of her religious life.

Born in Philadelphia to Hiram Paul and Mary Lucilla (McGowan) Bamberger, Barbara attended Good Shepherd Elementary School in Philadelphia (1945-1953) until the family moved to St. Pius X Parish in Broomall. She then attended Villa Maria Academy High School in Malvern (1953-1957) then Immaculata College from 1957 through 1960.

Barbara Ann entered the Sisters, Servants of the Immaculate Heart of Mary on July 16, 1961 and received her habit and her religious name Sister Barbara Maria. She professed first vows on Jan. 16, 1963.

Later while in the community she completed degree work at Immaculata and earned degrees from Temple University and the University of Notre Dame.

Sister Barbara Maria’s ministry of teaching grade school and high school students began in the fall of 1963 when she taught music at Annunciation Elementary School and Parish in Bellmawr, N.J.

From 1983 to 1986, Sister Barbara served the retired and infirm sisters in Camilla Hall as a member of the staff. In 1986 she had the opportunity to study at Notre Dame University, after which she returned to Camilla Hall as the director of liturgy and activities, serving in that role until 1989.

Sister Barbara is survived by her step-brothers Robert Muller and Sylvester Muller, many nieces, nephews and cousins, and her I.H.M. community. She is predeceased by her parents, step-sisters Helen (Muller) Hanahoe and Marion (Muller) Shanley, and step-brother William Muller.

NEXT: Sister Mary King, after 61 years of school ministry, dies at 88