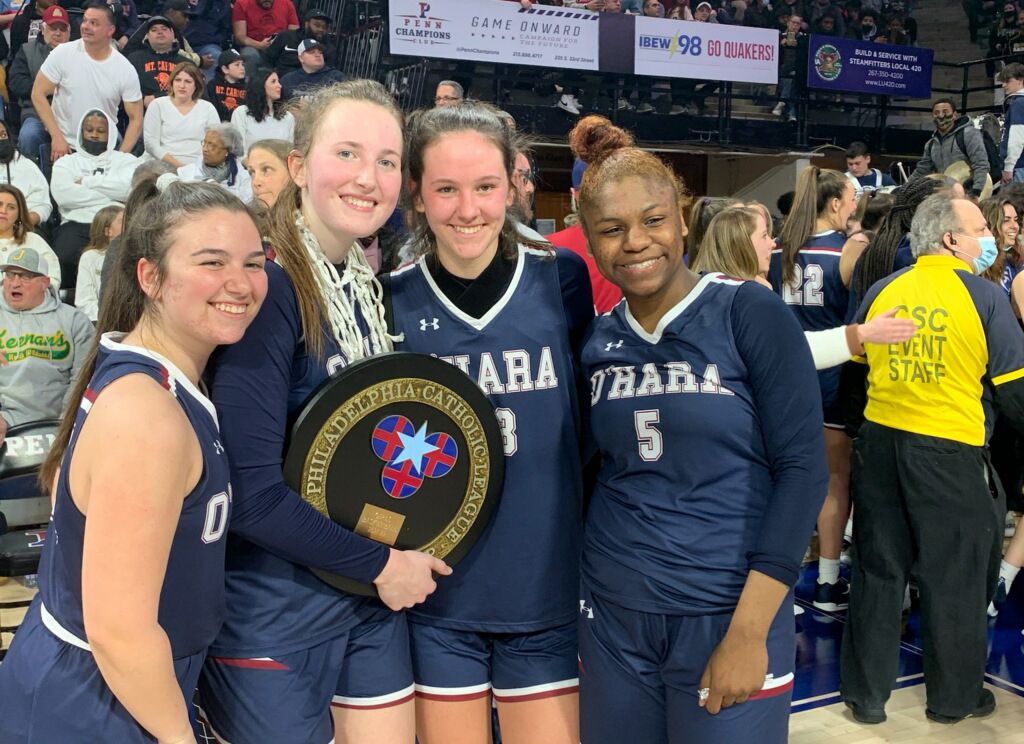 Cardinal O’Hara seniors (from left) Kristen Kutufaris, Maggie Doogan, Annie Welde and Sydni Scott pose with the Catholic League championship plaque they captured with a 55-30 win over Archbishop Carroll Feb. 28 at the Palestra in Philadelphia. The Lions will try to cap their season with a state championship in the PIAA Class 5A final Friday night, March 25. (Photo by John Knebels)

It’s no secret that much – if not all – of the Pennsylvania Interscholastic Athletic Association (PIAA) athletic programs have displayed some serious eye rolling since the Philadelphia Catholic League joined the mix in the fall of 2008.

After this season, those eyes might pop out of their sockets.

This weekend in Hershey, Pa. eight — yes, eight — PCL teams will compete in the state finals. In two different games, the championship bout is comprised of PCL finalists.

Each of the PCL’s eight coaches were asked to describe how it feels to be in the championship, summarize their team’s accomplishments over their four PIAA tournament victories, and assess the state of the PCL as a storybook season nears conclusion.

(See complete coverage of the state title games on CatholicPhilly.com next week. Results for Thursday evening’s games are noted below.)

Roman Coach Chris McNesby: “It’s great being back playing for a state championship. It’s special to be able to take the season as far as it can go. I’m really excited for this group of kids.

“They have been great all year and have developed great chemistry. They play for each other. I’m very happy that they have this opportunity.

“This group has really come together over the last two months. It’s been a pleasure to see them develop, play their roles, and play for each other. Wood is a great team and we always look forward to playing teams like that. It should be a great championship.

Archbishop Wood coach John Mosco: “It feels great to get to the final game of the season. Every year it is one of our goals to be playing the last game.

“We stayed together jelling on the defensive end. We have been sharing the ball. It will be exciting and different playing a Catholic League team in the final. Both teams know each other and players are friends, so it should be fun.

“It’s a tremendous credit to the PCL and Philadelphia basketball and the competition in our area. I feel our league is the best in the state.” 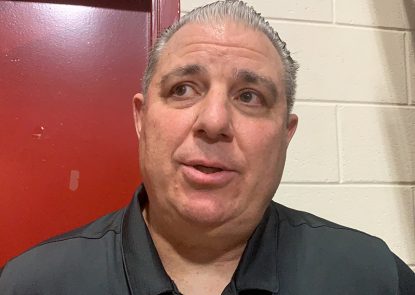 Neumann-Goretti coach Carl Arrigale: “It’s a great feeling to know you put yourself in a position to possibly win your last game of the season. Only six boys’ teams will have that opportunity to end on a winning note, and we are possibly one of them. What a great opportunity.

“Our defense has been good. We have held teams below what they normally score in every game. Our offense has been timely and has gotten better as the tournament has gone on, but it’s been the ‘D.’

“It just solidifies that the PCL is the premier league in the state. Good luck to all my fellow PCL teams.”

Boys’ Class 3A final – Devon Prep vs. District 7, 3-seed Aliquippa, 2:30 p.m. Saturday, March 26: After finishing 7-6 in the PCL and winning easily in the first round, the Tide have won their last three games by a composite 13 points, including a 73-72 semifinal nail-biter over District 2 champ Holy Redeemer.

Devon Prep coach Jason Fisher: “Honestly, the first 48 hours were a whirlwind. It was good to be back on the court to start preparing for the game.

“We have been playing as a complete team. All of the guys have been together in good times and most importantly the tough times, which has helped us overcome adversity.

“The PCL is one of the best leagues in the state. There is a saying ‘iron sharpens iron’ and this is a great example of that. There are no easy games, and constantly playing against great teams helps to make you better and prepare you for whatever may come.”

Girls’ Class 5A final – Cardinal O’Hara vs. District 7, 2-seed Chartiers Valley, 5 p.m. Friday, March 25: The Catholic League champion Lions are 24-5 overall and will defend their Class 5A title against a rugged Chartiers Valley team that finished 28-2. The Lions have won their four PIAA games by an average of 24 points.

Cardinal O’Hara coach Chrissie Doogan: “It feels great being back in Hershey. It is a goal that the seniors have had ever since we played in Hershey last year. They wanted to get back.

“Our team is playing really good defense right now and playing very unselfishly. (Freshman) Molly Rullo has been our leading scorer in the state tournament and our seniors could care less … we are all on the same page and are only concerned with getting wins.

“I am really happy for all the PCL teams that are still alive and playing in Hershey. We are all battle-tested and ready for the challenge of playing the best teams across the state. Wishing them all the best of luck.”

Girls’ Class 4A final – Archbishop Wood vs. Lansdale Catholic, 5 PM Thursday: The defending state champion Vikings defeated the Crusaders, 78-54, on Feb. 8 behind senior PCL Most Valuable Player Ryanne Allen’s career-high-tying 34 points. Wood has won its four PIAA games by a composite 103 points, including a 57-44 semifinal win over Jim Thorpe . . . Lansdale Catholic has captured each of its four wins by single digits for an average margin of 6.75 points. The Crusaders defeated District 10 champ Villa Maria Academy, 56-50, in the semifinals.

Archbishop Wood coach Mike McDonald: “It is really exciting. This was a pretty inexperienced team coming into the season, so to get to the state championship game really shows how much they have grown together. Having Hershey kisses rain down after winning the semifinal game will never get old.

“We are executing on both ends of the floor as a team better than we have all year. Defensively we have really been on the same page and had each other’s backs. Offensively we are really reading defenses and delivering the ball to the right person at the right time. We are also finishing plays regardless of contact. They are playing excuse-free basketball … mentally tough.

“It has not hit me yet as being any different. It could be something after the game that might make me feel some sort of way about it. We are focused on handling our business and winning the state championship, so we will review the strengths and weaknesses of this opponent like each previous opponent. Lansdale Catholic is playing good basketball and their young players are growing more and more confident. We will have to defend really well as a team to win this championship.

“The Philadelphia Catholic League is one of the toughest leagues in the country and is obviously the toughest in the state, so it is not shocking that the most battle-tested teams have found a way to make it to Hershey. Playing a challenging schedule forces coaches and players to find a new level of urgency when doing anything required in a basketball game.”

Lansdale Catholic coach Eric Gidney: “To go 2-11 and then the following year make it to the state championship is pretty remarkable. It’s been a whirlwind for all of us. We are all very excited and have the eye on the prize. It’s an honor to be here.

“To win consistently and then find a way to keep getting back to the state final is a testament to Mike and his program.”

Girls’ Class 3A final – Neumann-Goretti vs. District 7, 2-seed Freedom Area, 12 noon Saturday, March 26: The Saints have won eight of their last nine games and have taken the four PIAA games by a collective 112 points, highlighted by a 46-28 semifinal win over Imhotep.

Neumann-Goretti coach Andrea Peterson: “It’s always a good feeling to be back again. This group is special and they are ready to bring it back to NG.

“They are playing together. We have a really good leader in (senior Mihjae Hayes), and she’s done a good job of keeping them together. We are doing all the little things that need to be done to win. They are fun to watch, and I believe we finally hit our stride.

“The PCL is one of the best leagues in the country.”