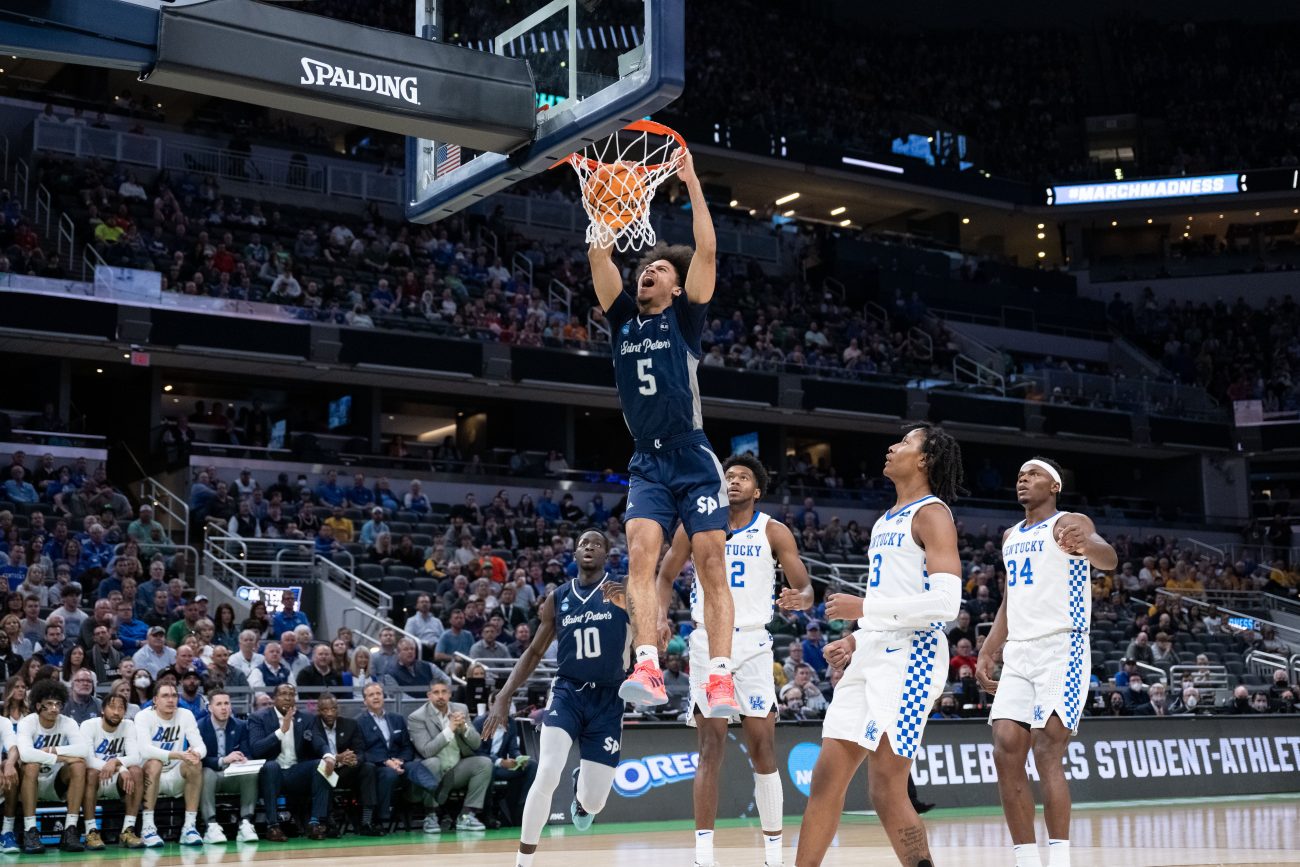 WASHINGTON (CNS) — St. Peter gained the upper hand on St. Patrick’s Day when the underdog team of the small Jesuit school, St. Peter’s University of Jersey City, New Jersey, upset the mighty University of Kentucky in the first round of the NCAA men’s basketball tournament.

The school’s winning streak continued in the second round of the tournament March 19, when the Peacocks beat Murray State University, 70-60, gaining a spot in the tournament’s Sweet 16. St. Peter’s will now face Purdue University March 25 in Philadelphia in the East Region.

The Jesuit school joins three other Catholic colleges in the third round of the tournament: top-ranked Jesuit-run Gonzaga University in Spokane, Washington; Villanova University, an Augustinian school outside of Philadelphia; and Rhode Island’s Dominican-run Providence College. The matchups take place March 24 and 25.

St. Peter’s 85-79 win over No. 2-seeded Kentucky in overtime March 17 at the start of the tournament was one for the record books since the New Jersey team went into the tournament at the Gainbridge Fieldhouse in Indianapolis as the No. 15 seed.

The Peacocks also had never won a game in this tournament before and were up against a team that had won the NCAA men’s basketball championship eight times.

“Peacocks Win!” was on university website’s homepage, and soon after the team’s victory, so many people were on the school’s site that it crashed.

On the team’s Instagram account just prior to the game, someone from the school said the Peacocks “might have the luck of the Irish on their side tonight.”

That luck and talent was celebrated at a watch party on campus for the school of about 3,000 students across the Hudson River from New York City.

“It’s huge,” said Daryl Banks III, who scored 27 points for St. Peter’s against Kentucky. “We’re putting Jersey City on the map,” he told ESPN, noting the team is from a small school and “probably a lot of people don’t even know who we are.”

But they know now, especially since the team has messed with many basketball fans’ bracket picks to win the tournament.

One person’s picks that weren’t changed by the upset were those of New Jersey Gov. Phil Murphy who tweeted his bracket picks, with St. Peter’s to win, after the victory and said: “NEVER A DOUBT.”

The win also put all eyes on the team’s coach, Shaheen Holloway, a former coach and player at Seton Hall University, a Catholic university in South Orange, New Jersey, who was matched up against Kentucky’s legendary coach, John Calipari.

When asked by a reporter after the game what the March Madness tournament means to him, Holloway said: “You just have to be good on this night,” adding that it’s not about the team record or the school. “It’s whoever is good on that night and tonight it was our night.”

At Loyola’s matchup in Pittsburgh, Sister Jean Dolores Schmidt, the 102-year-old team chaplain, who is a Sister of Charity of the Blessed Virgin Mary, was cheering, and praying, the team on.

When asked by USA Today if she had any hesitations about praying for a basketball game when there are so many troubles in the world, she said she prays for those situations too, referring to the war in Ukraine.

“God hears all prayers,” she said, adding: “I don’t have any problem praying for the team. If it’s God’s will, it’ll happen.”

In the NCAA women’s basketball tournament, one Catholic college’s team, Jesuit-run Creighton, will be playing in the third round. Creighton beat the University of Iowa, 64-62, on March 20 and will play Iowa State University March 25. This is Creighton’s first time in the tournament’s Sweet 16.

The Gonzaga women’s team lost 68-59 to the University of Louisville March 20 in the second round.