Peter’s denial, and the mercy of Christ 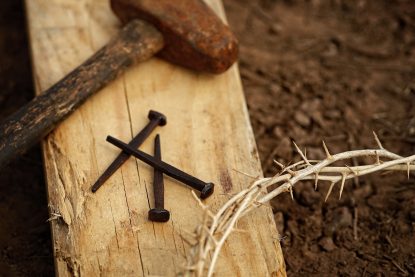 This is a Good Friday illustration photo of a hammer, nails, wood and a crown of thorns. In the passion narrative, we hear of the agony in the garden, the arrest and trial of Jesus, and his scourging and crucifixion. (CNS photo/Nancy Wiechec)

Every year on Palm Sunday, we hear the narrative of the passion of Our Lord Jesus Christ. This year, we read from the Gospel of St. Luke. It is a story that is familiar to us.

As Catholics, we surround ourselves with depictions of the passion and death of Jesus. We hang crucifixes on our walls and on chains around our necks; we put crucifixes in the sanctuaries of our churches and on our altars; we ring our churches with the Stations of the Cross.

We hear of the entrance into Jerusalem, the Last Supper, the agony in the garden, the arrest and trial of Jesus, and his scourging and crucifixion. The proclamation of the passion narrative on Palm Sunday, and again (but from a different Gospel) on Good Friday, is an important way of entering into the suffering of Jesus as we prepare for the triduum.

One element of the passion narrative that does not get as much attention is St. Peter’s threefold denial of Jesus.

The story is well known to us: During the Last Supper, shortly after breaking bread together when Our Lord instituted the Eucharist, Peter tells Jesus, “I am prepared to go to prison and to die with you,” to which Jesus responds, “I tell you, Peter, before the cock crows this day, you will deny three times that you know me” (Lk 22:33-34).

As the night went on, Peter’s fidelity would be put to the test, as Jesus was betrayed, arrested, severely beaten and put on trial. As Peter sat in the courtyard of the house of the high priest, gathered with others around a fire, three of those near him insisted that they recognized him as a follower of Jesus.

Fearing for his life after seeing what had happened to Jesus, Peter stringently denied it each time.

And then we read one of the most gut-wrenching and heartbreaking passages in the Gospels: “And the Lord turned and looked at Peter; and Peter remembered the word of the Lord, how he had said to him, ‘Before the cock crows today, you will deny me three times.’ He went out and began to weep bitterly” (Lk 22:61-62).

As happens so often with us, Peter immediately knew he had done something horribly wrong, realized his weakness had caused him to deny even knowing Our Lord and was overcome with remorse.

What a heart-rending thing: As Jesus is facing his trial and tremendous abuse, his closest and most trusted follower brazenly denies even knowing him.

Amid everything else going on, Jesus turns and looks at Peter, calling him out with a gaze. How Peter’s heart must have broken! And how his guilt must have been even greater because of his brazenness earlier in the night, declaring his steadfastness and loyalty to Jesus.

Peter was never one to deny his unworthiness and his fallen nature. When Jesus first called him to be one of his apostles, after the miraculous catch of fish, Peter dropped to his knees at feet of Jesus and said, “Depart from me, Lord, for I am a sinful man” (Lk 5:8). We can almost hear Peter saying this again, wracked with guilt after denying Jesus.

There may be a temptation to read into Peter’s denial — his failure, his abandonment of Jesus — an implicit refutation of his importance and that of his successors. As Catholics, we recognize the primacy of Peter and his successors as an important part not only of the structure of our church, but of the very body that Christ left to safeguard and transmit the deposit of faith.

It has nothing to do with the holiness of the man — it is all about Jesus’ promise to his church that Peter and his successors would be protected from teaching error, and his promise that the gates of hell will not prevail against it. Peter’s failure does not affect this promise. In fact, it can serve as a reminder to us of why this promise was necessary in the first place.

Our Lord is loving and forgiving (Ps 86:5). After his resurrection, Jesus gave Peter a threefold chance to make amends for his threefold denial. Three times, Our Lord asked him, “Simon, son of John, do you love me?” to which Peter responded “Yes, Lord, you know that I love you.” (Jn 21:15-17)

Jesus tells Peter to feed his sheep, reinforcing the special privilege and responsibility that had been granted to Peter. God’s mercy is endless, and Jesus makes all things new (Rv 21:5).

Salvation history is replete with examples of God making a covenant with his people, only for those people to break the covenant through sin and disobedience.

God always responds with mercy, forming a new covenantal bond. The covenant in the blood of Christ is a “new and eternal covenant,” one which we cannot definitively break. God’s mercy is on full display.

Today we know that we can approach God in the sacrament of reconciliation and accept the forgiveness that he presents to us. In the same way, Our Lord presented his forgiveness to Peter on the seashore, and Peter chose to accept it.

Senz is a freelance writer living in Oklahoma with his family.

PREVIOUS: A Lenten exercise: Crack the case of ‘Mrs. Zebedee’