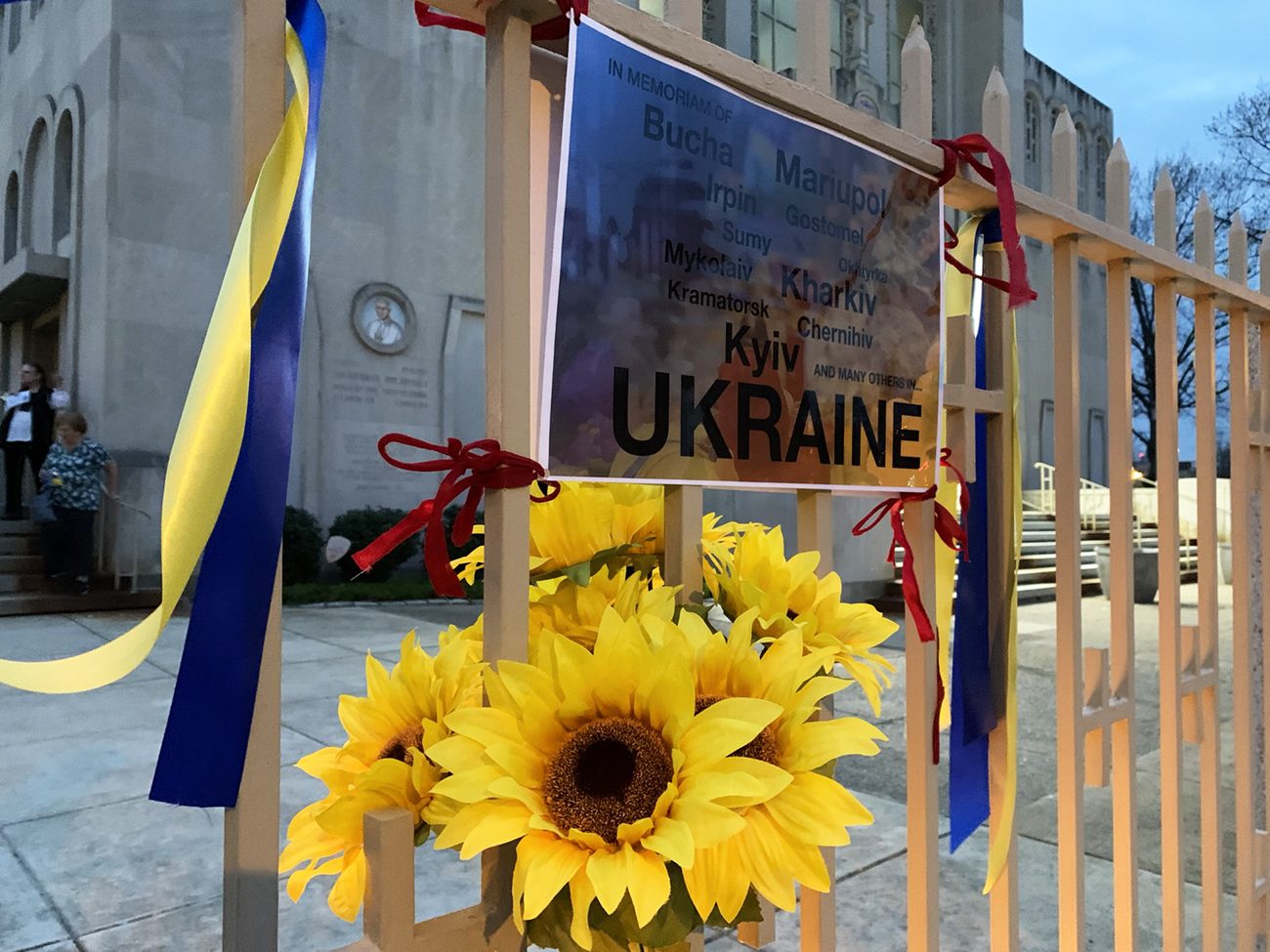 A display before the Ukrainian Catholic Cathedral of the Immaculate Conception in Philadelphia is seen at an April 13 prayer service commemorating thousands of civilian deaths and atrocities in Ukraine amid Russia's latest invasion of that nation. (Gina Christian)

The Ukrainian Catholic Cathedral of the Immaculate Conception held an April 13 prayer service immediately after its evening liturgy, commemorating tens of thousands killed or wounded in cities such as Bucha, Mariupol, Irpin, Kharkiv and Kramatorsk.

The candlelit gathering, which took place before the steps of the cathedral, was led by Archbishop Borys Gudziak of the Ukrainian Catholic Archeparchy of Philadelphia, metropolitan archbishop for Ukrainian Catholics in the U.S., and cathedral rector Father Roman Pitula.

“(These) are people who are suffering or starving, who need our help, who need to be freed, who need to feel that freedom lives,” said Father Pitula.

“You don’t have to go too far to call it genocide,” said Father Pitula. “It’s looting, it’s killing, it’s murdering, it’s raping …(including) the raping of girls and kids.” 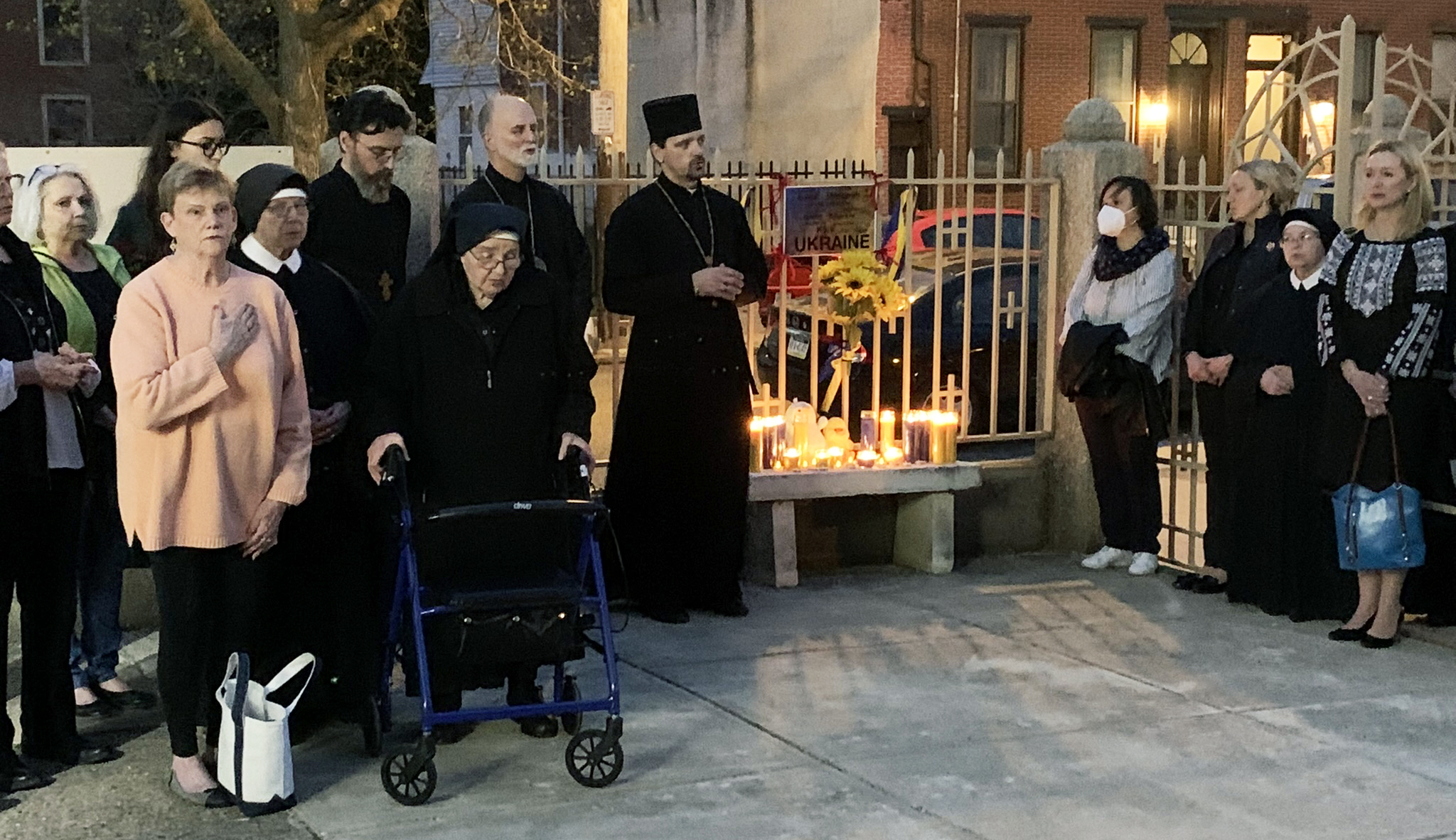 He cited an instance reported by Ukrainian President Volodymyr Zelensky in an April 12 video address to Lithuania’s parliament, during which Zelensky said “even a baby” had been raped by a Russian paratrooper, “who sent his friends a video of what he was doing to the baby.”

Russian citizens are being “indoctrinated” to regard Ukrainians as “monsters” to facilitate an “(obliteration) of the Ukrainian state,” said Archbishop Gudziak.

“The texts that are now appearing in the Moscow press are explicitly genocidal,” he said. “There’s an effort to dehumanize Ukrainians (and) … (the) strategy for claiming them Nazis is to dehumanize them.”

Scholars and analysts worldwide have noted such rhetoric stands at odds with reality, as Zelensky, who is Jewish, lost three great-uncles during the Shoah (Holocaust).

On March 1, Russian forces destroyed Babyn Yar, site of one of World War II’s largest massacre of Jews, where close to 34,000 from Kyiv were murdered over two days in 1941, and where an estimated 100,000 Jews and non-Jews were eventually slain.

While Russia’s May 9 “Victory Day” celebrates the Soviet defeat of Nazi forces, the current use of the term “Nazi” has little to do with the Third Reich, said Archbishop Gudziak.

That nation’s current invasion of Ukraine – coming just eight years after Russia annexed the Crimean Peninsula and backed separatist republics in Ukraine’s Donetsk and Luhansk regions – is driven by a fear of democracy, said the archbishop.

“Ukraine is a country that was developing a vibrant democracy with a strong civil society,” he said. “(It has) freedom of the press, freedom of religion – and the virus of that disease could not spread to Russia, because Putin’s system is a kleptocratic oligarchy, and transparency is its death.”

The Kremlin has sought to stifle independent reporting on Russia’s invasion, which it calls a “special military operation,” by passing a law banning any coverage that does not align with official statements.

In addition, Russia has routinely denied reports of civilian atrocities and even of its own deaths and military losses — a pattern consistent with what the nonprofit think tank Rand Corporation previously called a “firehose of falsehood” propaganda model.

Westerners are not immune to such disinformation about the war in Ukraine, said Archbishop Gudziak.

“Today’s propaganda doesn’t try to convince you of something,” he said. “It tries to get you to doubt the truth.”

As Russian forces look to redouble their assaults in Ukraine’s eastern areas, the archbishop warned “we need to really brace ourselves” for what he predicts will be “a long haul.”

Yet he and those present at the April 13 service remain confident in God’s strength.

“We have pure proof that evil is here,” said Father Pitula. “But we have another power in Jesus, our Lord, and we have him to help us. Evil works, but God’s power is greater.”

The archbishop agreed, urging faithful to “pray and ask for God’s guidance, ask for courage and steadfastness in supporting those who really are fighting for the freedom of the world.”

NEXT: Easter blessing of food satisfies body and soul