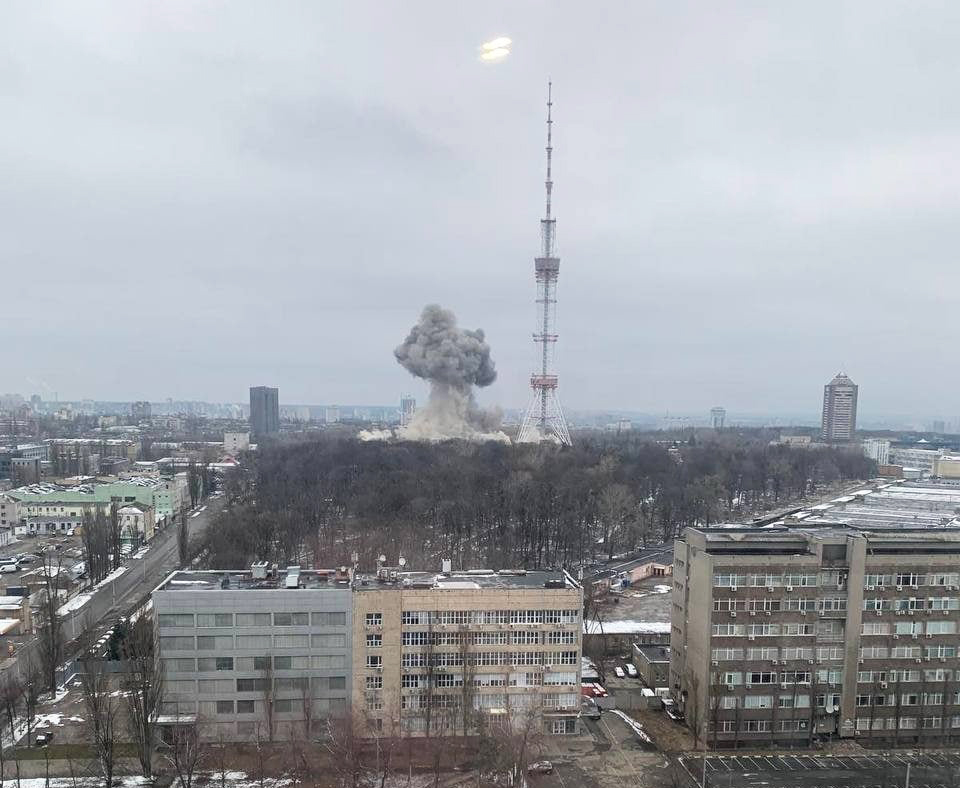 A Russian missile strike damaged a TV tower in Kyiv as well as the nearby Holocaust memorial Babyn Yar, where close to 34,000 Jews were killed over two days in 1941. (Facebook/Babyn Yar Holocaust Memorial Center)

A March 1 Russian military strike on the capital of Ukraine damaged the site of one of World War II’s largest massacres of Jews, prompting global condemnation — and a call from local scholars to preserve the memory of Shoah (Holocaust) victims.

The missile, which struck Kyiv’s iconic TV tower, killed “at least five” while hitting “the same site of Babyn Yar,” according to a tweet posted by Ukrainian President Volodymyr Zelenskyy.

Over two days in 1941, close to 34,000 Jews from Kyiv were shot by Nazi SS, German police and their auxiliaries at Babyn Yar (also spelled Babi Yar), a ravine that at the time was located just outside of the city. Prior to their execution, victims were forced to undress and lie on top of those who had already been machine-gunned.

Babyn Yar remained a mass killing site for an additional two years, with an estimated 100,000 people, both Jews and non-Jews, ultimately murdered there. As Soviet troops approached in August 1943, German forces attempted to cover up the deaths by ordering prisoners to exhume and burn the bodies.

Yet even after the war Babyn Yar was unacknowledged for decades, and “later Communist markers only spoke of the murder of citizens there,” said Philip Cunningham and Adam Gregerman, directors of the Institute for Jewish-Catholic Relations (IJCR) at Saint Joseph’s University in Philadelphia, and faculty members of that school’s theology and religious studies department.

“When many eastern European countries were dominated by the Soviet Union during the Cold War, signs and brochures at the sites of mass murders of Jews during World War II barely mentioned that Jews were the primary targets of the Nazi extermination campaign. This was also true at Babi Yar,” said Cunningham and Gregerman in a joint statement issued March 1.

“After the disintegration of the Soviet Union, the Ukrainian government approved the development of a shrine to remember the Jews and a Holocaust memorial center opened in 2016,” they noted.

Babyn Yar Holocaust Memorial Center chairman Natan Sharansky posted on the site’s Facebook page that Russian President Vladimir Putin was attempting “to distort and manipulate the theme of the Holocaust to justify the illegal invasion of a sovereign democratic country.”

“It is symbolic that he starts attacking Kyiv by bombing the site of the Babyn Yar, the biggest … Nazi massacre,” wrote Sharansky.

Center staff were “working to preserve a historic memory after decades of Soviet suppression of historical truth so that the evils of the past can never be repeated. We must not allow truth to — once again — become a victim of war,” he said.

Prior to the missile attack, the center had issued a statement condemning both the aggression against Ukraine and Putin’s “use of language related to the Holocaust,” which it described as “genocidal rhetoric.”

“Russia has vulgarly instrumentalized anti-Nazi rhetoric and is trying to take on the role of a fighter against Nazism … under the false and dangerous narrative of ‘denazifying’ Ukraine and its people,” read the statement.

In his tweet, Zelensky asked “what is the point of saying ‘never again’ for 80 years, if the world stays silent when a bomb drops on … Babyn Yar? … History repeating…”

Cunningham and Gregerman said “this act of warfare should not be allowed to restore the suppression of the memory of the Shoah’s Jewish victims that marked Soviet policy throughout the post-war decades.”