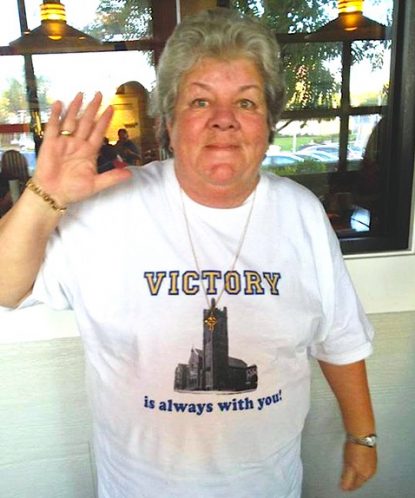 Were you lucky enough to have one special teacher or coach whose faith in you transformed your life?

For thousands of West Philadelphia natives now in their 20s through 50s, the ready answer to that question is, “Ms. Cash!”

Janis Cash worked in Catholic elementary schools for 42 years, spending most of her career as an eighth-grade teacher and basketball coach at the former Our Lady of Victory (OLV) School at 54th and Vine streets.

Pancreatic cancer took this vibrant soul from the world in 2015, but former students and colleagues touched by her kindness have teamed up to pay it forward, establishing the Janis Cash Books and Hoops Scholarship Fund.

When former students swap stories about Cash, they always focus on how well she knew and loved them — and how far down the extra mile she would go. For example, as her eighth graders were getting ready to graduate, Cash would tell them which diocesan or private high school she believed would fit them best. She often used her network of contacts to make sure scholarship money then appeared for the students.

Knowing which families were suffering hard times, she sometimes took their children shopping for new clothes, paid for out of her own pocket.

Even when she needed to reprimand a student, remembered OLV alumna Melvina Williams, “you couldn’t feel bad, because you knew it was out of love.”

Former student Ayeshia Smith echoed that sentiment, recalling a time when she and Cash actually “cried together in the middle of the street right in front of OLV Church, because I needed an attitude adjustment and couldn’t understand why she was being so hard on me about my academics and being mischievous.”

The adjustment worked, and Smith is now pursuing a doctoral degree.

Cash always encouraged her students to pursue their highest dreams. Former student Rhonda Hampton Scarbrough, herself a teacher now, described Cash as “warm, kind and very much an advocate for higher learning.”

“I am an educator today,” said Hampton Scarbrough, “because of Janis Cash. She was my favorite teacher and I imitate her often, as I aspire to be the best educator I can be.”

In sports, Cash coached her students to respect the dignity of each person. She wouldn’t allow anyone to badmouth a teammate, cautioning, “You never know what they’re hearing at home,” recalled her former players.

Often, when one of her teams was way ahead in a basketball game, she would encourage her players to let the opposing team score some baskets. “You know we’re going to win; why not help them go home feeling better about themselves?” was her advice.

Amazingly, her girls would start passing to the other team — and go home feeling better about themselves as well. 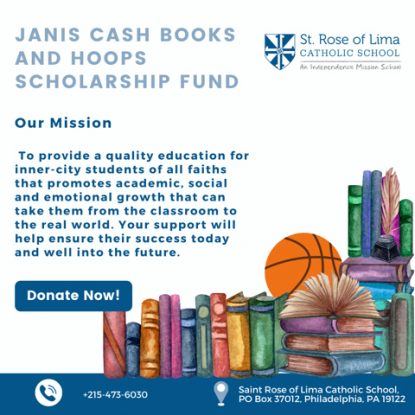 A promotional flyer for the Book and Hoops Scholarship.

The scholarship fund is nicknamed “Books and Hoops” not only after two of Janis’ greatest passions, but in memory of a summer academic and basketball camp at Villanova and Neumann universities with which she was deeply involved for two decades.

Friend and former colleague Allison Walker is leading the full court press to establish the scholarship for students attending St. Rose of Lima, an Independence Mission School in the Carroll Park neighborhood of West Philly where Cash concluded her teaching career.

Third-grade teacher Rhonda Hampton Scarbrough calls St. Rose “a wonderful place for the whole child — mind, body and spirit — to develop, not just academically but in all the ways needed to be prepared for the world.

“Many of our parents are graduates of St. Rose and want their children to experience what they did when they were scholars there,” she said.

Since each child’s education costs the school $6,700, the scholarship committee is hoping to raise $20,000 to fully fund the education of three students each year. Recipients will be selected by the school; the committee asks only that they be academically successful, in financial need, and that at least one of the three be on the girls’ or boys’ basketball team.

This year, uncertainty over COVID prevented the committee from hosting fundraising events. Organizers hope word of mouth will generate the needed funds, given how many people were touched by Cash’s care.

Anyone who would like to share “Ms. Cash” stories is welcome to attend a Facebook Live event on Friday, April 22 at 7 p.m. via Allison T. Walker’s page.

“Ms. Cash continues to be in my nightly prayers,” said Ayeshia Smith. “Her direction helped me become the woman I am today.”

Anyone whose life was changed by Janis Cash or by another remarkable teacher or coach can donate to the scholarship fund. Visit https://stroseoflimaphila.imsphila.org/support/donate/ and select “Janis Cash Scholarship” under the words, “please use this donation for.”

Everything raised will be given to St. Rose School on May 6, the date that would have been Cash’s 78th birthday.

Writer and speaker Christine Marie Eberle’s work can be found at christine-marie-eberle.com.

PREVIOUS: Prayer service invites faithful to see Christ in the sufferings of Ukraine

NEXT: Catholic schools’ agreement with Faith in the Future to end June 30