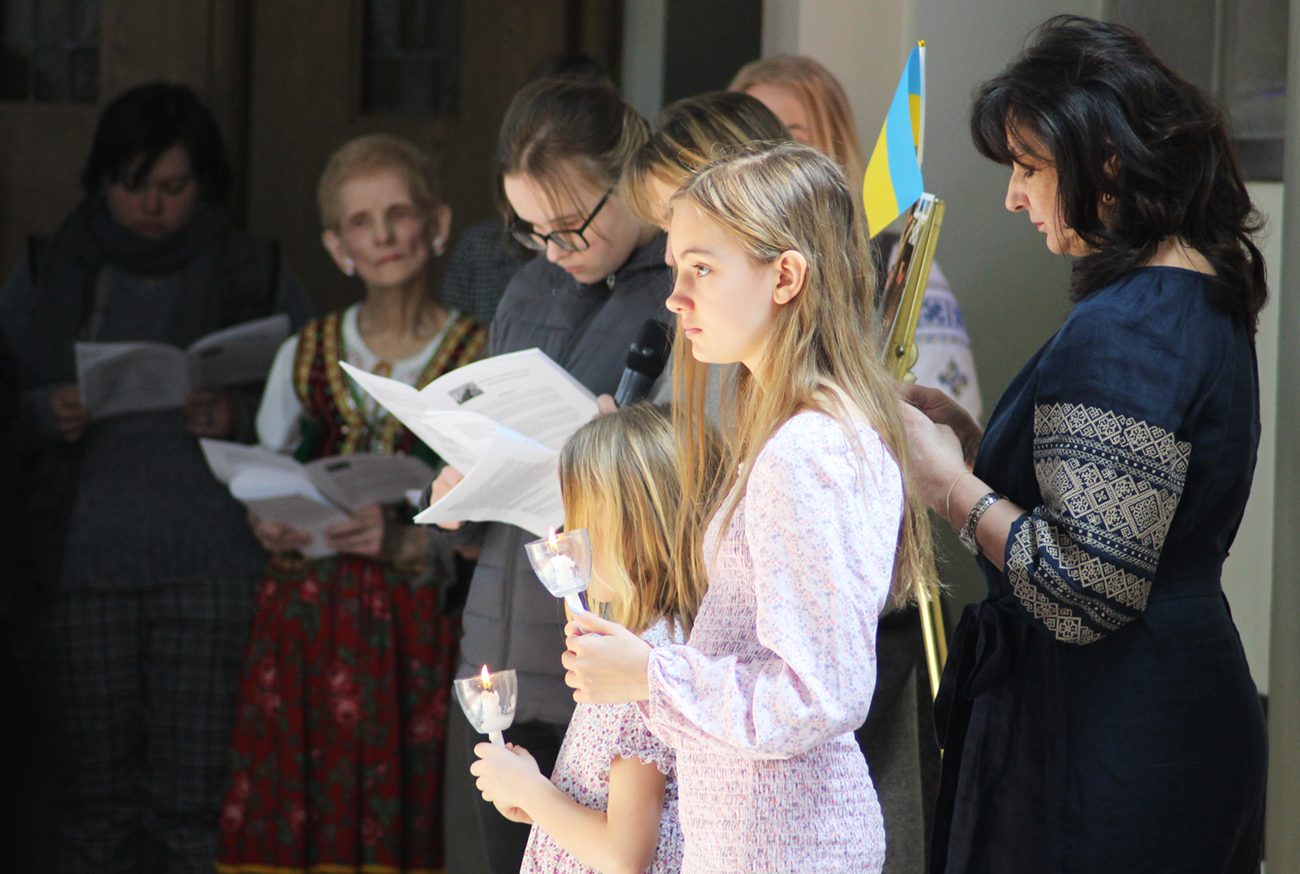 Faithful join in praying the "Stations of the Cross for Ukraine" at the Ukrainian Catholic Cathedral of the Immaculate Conception in Philadelphia, April 3. (Gina Christian)

Dozens gathered last weekend to participate in a Lenten devotion that has taken on new meaning amid the Russian invasion of Ukraine.

On April 3, some 100 gathered at the Ukrainian Catholic Cathedral of the Immaculate Conception in Philadelphia to pray the “Stations of the Cross for Ukraine.”

The service was jointly organized by cathedral pastor Father Roman Pitula and Religious Sister of the Assumption Sister Gertrude Borres, director of the archdiocesan Office for Pastoral Care of Migrants and Refugees (PCMR), part of the Office for Cultural Ministries.

The prayer service drew on a set of meditations published by Jesuit Father Jim McDermott, associate editor of America Magazine.

The publication’s former art director, Ukrainian-American artist and photojournalist Tatyana Borodina, compiled texts, emails and photographs from people directly impacted by the Russian attacks, and Father McDermott correlated these with each station in his text.

The images were reproduced for the April 3 service, with faithful from numerous ethnic and cultural communities leading prayers and reflections in Ukrainian, English, Spanish, Polish, Filipino and Indonesian.

Uniting diverse groups to view Christ’s passion through the lens of Ukraine’s current struggles was both profound and timely, said Sister Gertrude. 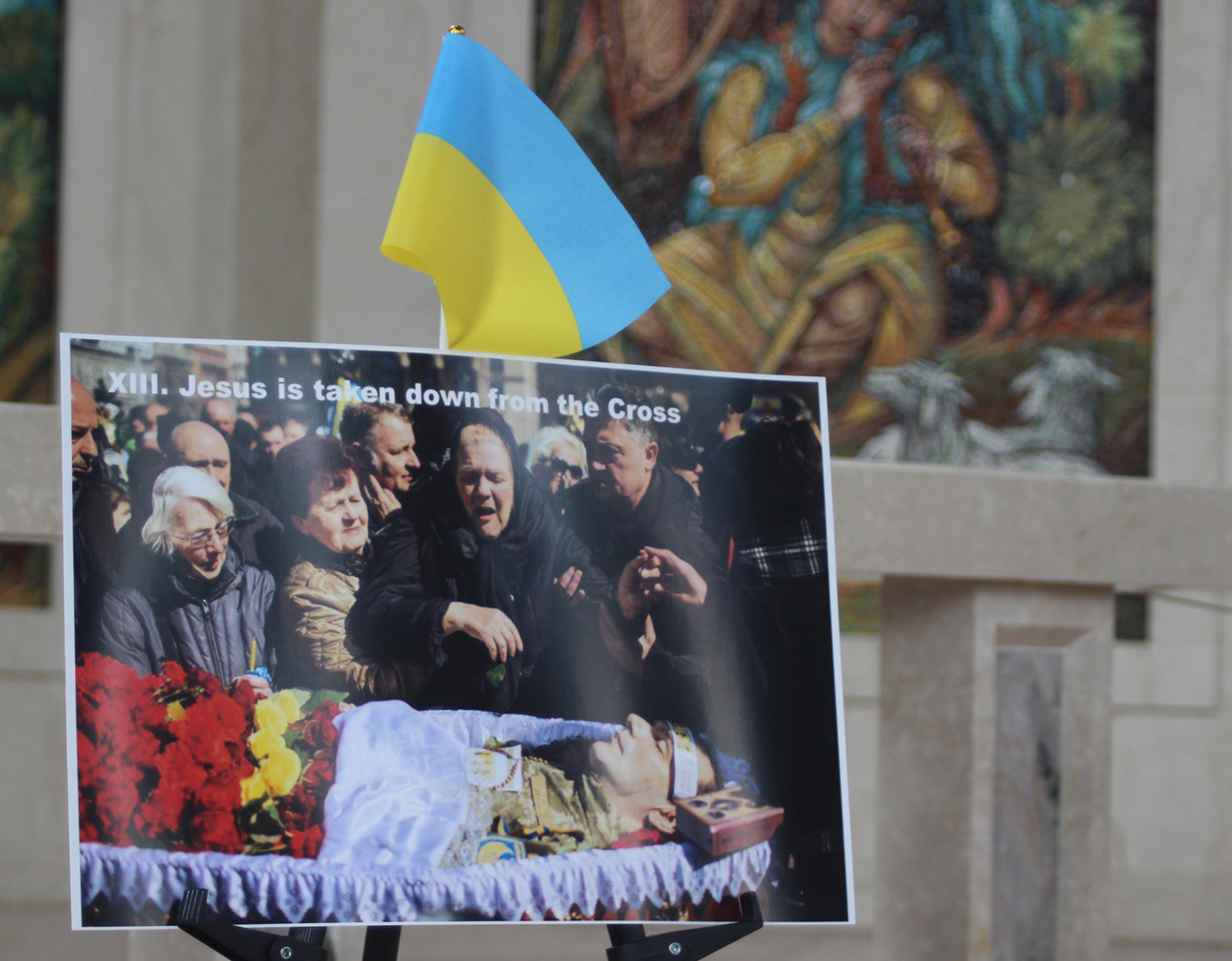 Images of the war in Ukraine were displayed at an April 3 “Stations of the Cross for Ukraine” service hosted by the Ukrainian Catholic Cathedral of the Immaculate Conception in Philadelphia. (Gina Christian)

In his welcome remarks, Father Pitula thanked those on hand for “taking (their) part in the pain of the people of Ukraine.”

Since Russia invaded Ukraine Feb. 24 – eight years after annexing Ukraine’s Crimean Peninsula and backing the separatist Donetsk and Luhansk territories in Ukraine’s east – thousands have been killed and more than 10 million displaced, with 4.3 million of that number fleeing to neighboring countries.

Global condemnation of Russia has intensified in recent days, as Western journalists have released multiple images of dead civilians – many shot execution-style, burned or buried in mass graves – in towns such as Bucha, from which Russian troops have recently retreated. Russian officials and state-run media have dismissed the photos as staged, despite eyewitness and satellite corroboration of the atrocities.

In her testimony to Human Rights Watch, a female teacher in Bucha said that following the March 4 summary execution of one Ukrainian man, a Russian commander advised horrified villagers that the victim was “dirt” from which troops were “here to cleanse (them).” 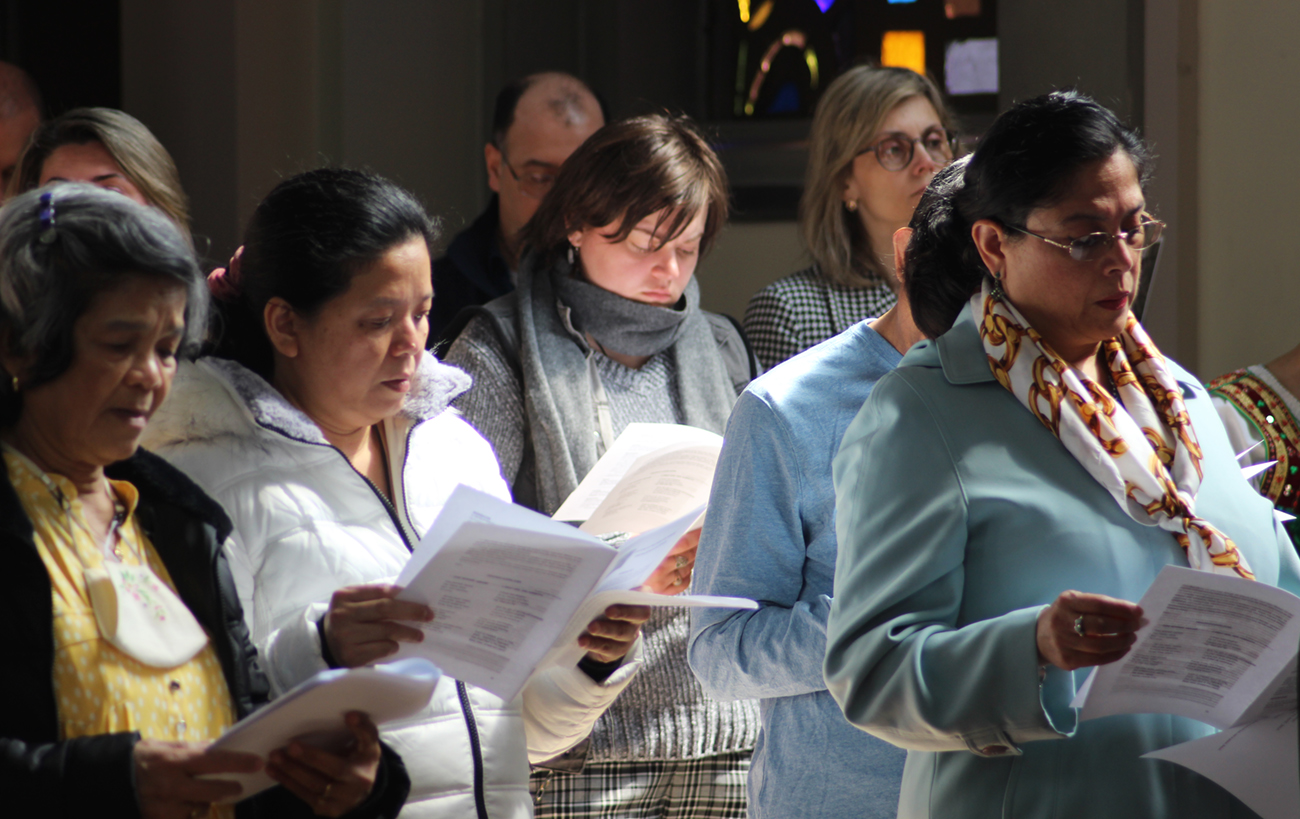 Faithful from a number of archdiocesan cultural communities gathered for an April 3 “Stations of the Cross for Ukraine” hosted by the Ukrainian Catholic Cathedral of the Immaculate Conception in Philadelphia. (Gina Christian)

Several Ukrainian women and girls have reported being brutally raped by Russian forces. Ukraine’s ambassador to Estonia, Mariana Betsa, tweeted April 4 that the body of a three-year-old from Mykolaiv, an image of which she included in her post, showed “signs of rape.”

“We could talk about this as genocide,” said Father Pitula. “It’s inhumane. People buried together with their hands tied, bullets in their heads … men, women, children, young adults being killed.”

Many of those present at the prayer service wiped away tears, visibly shaken by news of the atrocities.

“It’s almost too much to bear,” said Ukrainian cathedral parishioner Dr. Ania Kernytsky Wojciechowski. “My brother came for half of (the service), and he could barely handle it.”

The current war hits close to home for Wojciechowski, whose father fled when Soviet forces edged out Nazi occupiers of Ukraine in 1944. During the same time, her mother’s family was forced off of its farm and escaped to eastern Poland, where her mother grew up under “horrible communist persecution,” said Wojciechowski. “They couldn’t speak Ukrainian there, and the Ukrainian Catholic churches were closed.” 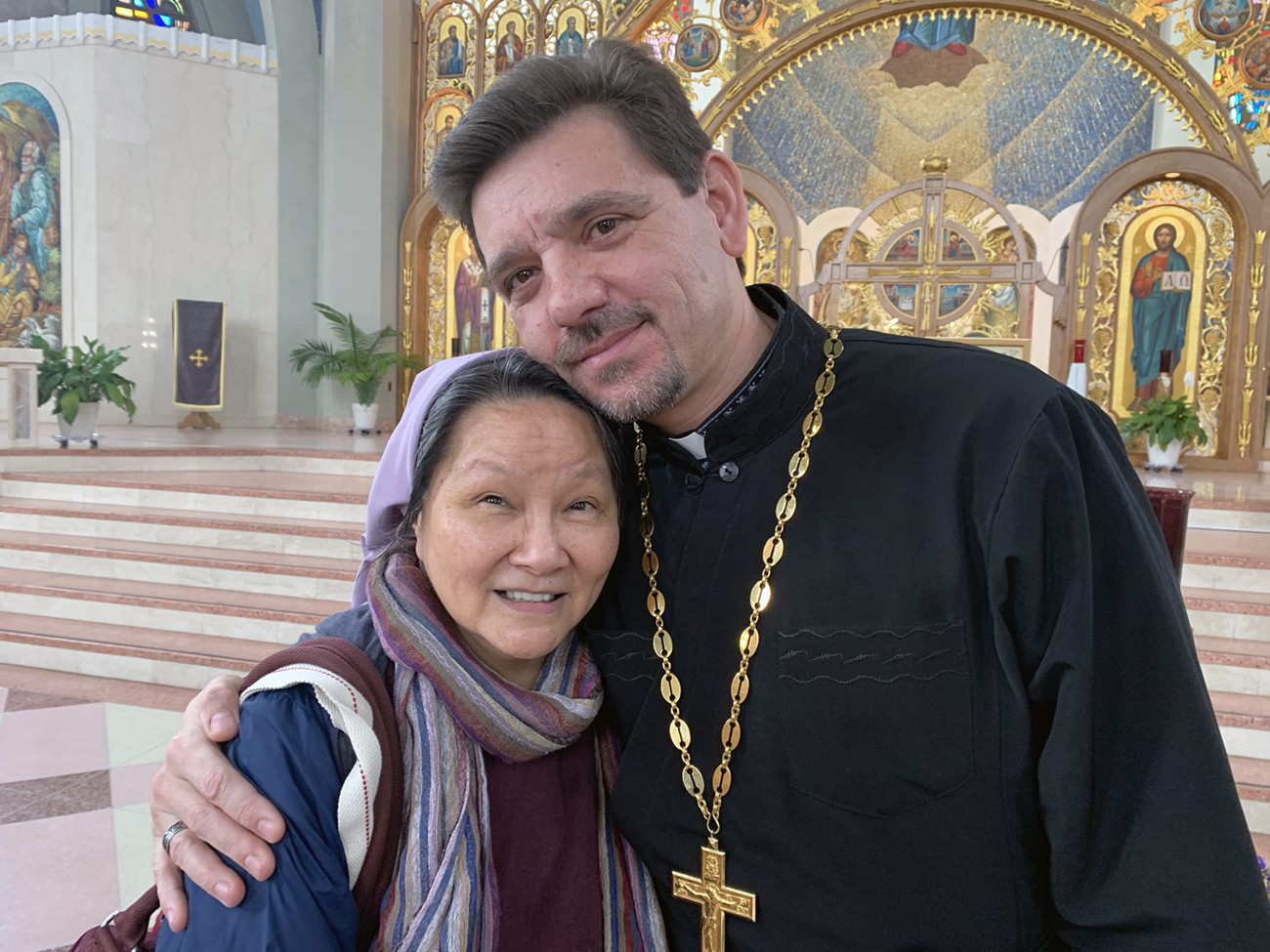 Religious Sister of the Assumption Sister Gertrude Borres and Father Roman Pitula coordinated the April 3 “Stations of the Cross for Ukraine” at the Ukrainian Catholic Cathedral of the Immaculate Conception in Philadelphia, where Father Pitula is rector. (Gina Christian)

To provide humanitarian aid to Ukraine, Wojciechowski has launched Victoria’s Veselka, named after her late infant daughter and the Ukrainian word for “rainbow.”

“We’re just trying to bring hope to people,” she said.

And that hope is far from unfounded, said Father Pitulka, who like many Ukrainian Catholic clergy leaders has likened the Ukrainian people’s pain – and future deliverance — to that of Christ.

“Ukraine is going through her passion,” he said. “But Ukraine will not die. … It’s going to be suffering like Jesus suffered. The devil thought he was victorious; he was laughing: ‘Jesus is dead and he is on the cross; I won.’

“But (that was) just for a second,” he stressed. “A few days later, Jesus rose again. … After this (war), we believe (there) will be a resurrection of our Ukraine — the newest, the best, the most prosperous and … the most Christian.”

PREVIOUS: No marriage is perfect, but all can be complete, speakers say