Seminarians prepare 4,000 meals for the needy at Caring for Friends 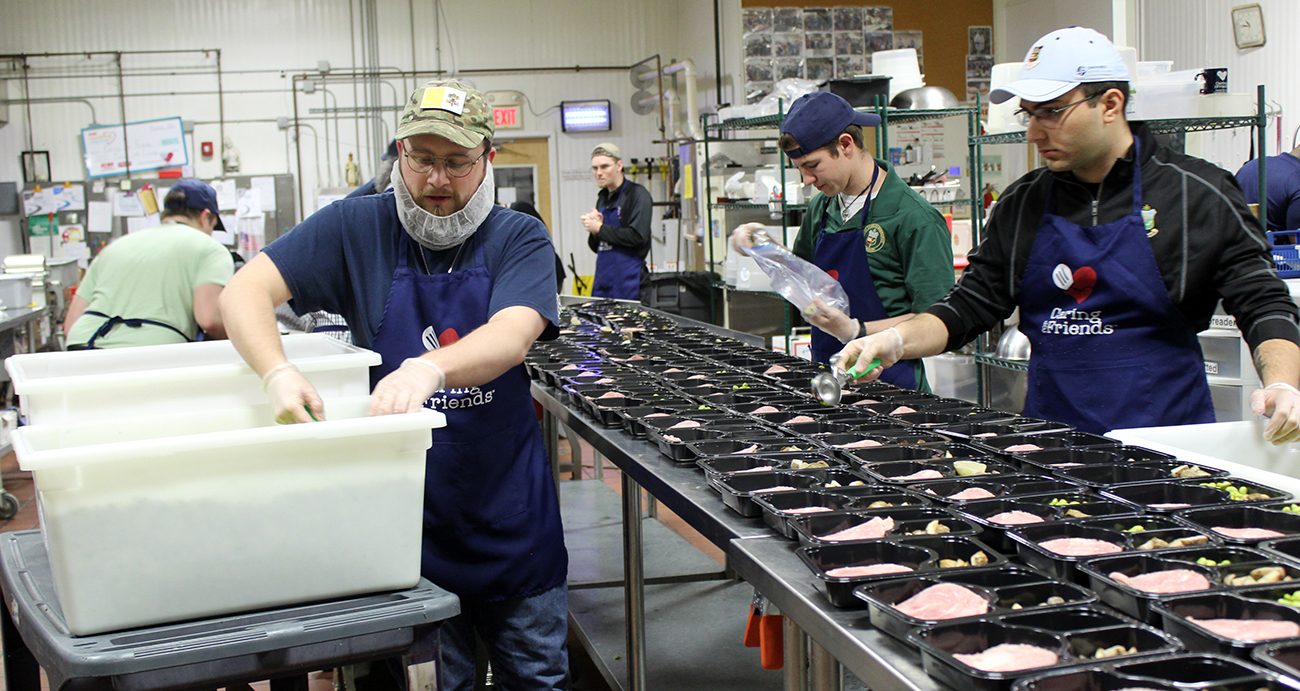 Eight seminarians and a priest from St. Charles Borromeo Seminary gathered last Thursday, March 31 at the Northeast Philadelphia headquarters of Caring for Friends and packaged 4,035 meals.

It was the most ever in a single session for the nonprofit that provides food and friendship to those in need in the five-county Greater Philadelphia area.

Meals of ham, potatoes and edamame will go to homebound seniors, veterans and people with disabilities just in time for the Easter holiday.

Many area residents grappling with food insecurity do not have the ability to plan a special meal like Easter dinner. That’s where Caring for Friends enters.

Volunteers deliver balanced meals to those being served while also visiting and building relationships. This allows for volunteers to consider a person’s preferences and special holidays when choosing which meals to deliver.

Hams were bought and cooked at the Caring for Friends kitchen with Easter in mind, but volunteers were needed to package and label the meals. 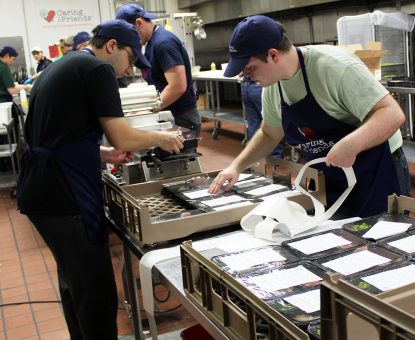 Seminarians label every meal they package so that residents receive the meal they prefer — including traditional Easter ham dinners — March 31 at Caring for Friends. (Maria Pisano)

St. Charles Borromeo seminarians volunteered for the task, continuing a mission since September 2021 as part of the seminary’s apostolate program, in which the men are sent out in groups every Thursday to engage in acts of service in the Philadelphia region.

For a group of seminarians in the seminary’s Theology Division, that means fulfilling Jesus’ command to feed the hungry (Mt. 25:35) with Caring for Friends.

Although the speed and sheer number of meals can be viewed as impressive, it’s not about the quantity. Seminarian Drew Tanguay, II Theology for the Diocese of Harrisburg, said the group received this advice when first starting at Caring for Friends: “Do it with love.”

Tanguay said they make this advice tangible by putting extra care into their work, like making sure the food and packaging is presented nicely.

Priests are meant to “be a servant first,” according to Auxiliary Bishop Timothy Senior, chancellor of St. Charles Borromeo Seminary.

While on site at Caring for Friends, he noted that priests are leaders after the heart of Christ, which means they are servant leaders.

“These (seminarians) have that,” he said.

The Thursday apostolate is an integral part of priestly formation at St. Charles Borromeo Seminary.

While many seminaries have apostolate programs, few dedicate an entire day each week to it. In order to make space for a weekly day of service, seminarians fit five days of academic studies into four days.

“It’s not easy, but we think it’s worth it,” said Bishop Senior.

The church has a fundamental priority for the needs of those struggling with low income, and that always has to be in a priest’s heart, he said.

While volunteering, the seminarians were joined by Father Christopher Cooke, dean of men in the theology seminary.

“We’re really grateful to (be) able to serve,” he said.

The volunteer service has allowed the seminarians to see the reality of what it takes to feed people in need, while fostering teamwork, connection and “application of self” for a mission, according to Father Cooke.

Being a leader includes being willing to be led, said Father Cooke, and at Caring for Friends, the men have learned “docility and submission of self for the greater good.”

Andrew St. Denis, I Theology for the Diocese of Harrisburg, said seminarians learn a lot of theory in classes, and the apostolate provides the opportunity to encounter reality. He noted that Jesus fed the hungry before proclaiming the Gospel to them.

Tanguay added that going into the priesthood, it’s good to know the value of feeding both the body and soul. He also appreciated the huge administrative process involved in feeding the hungry, and the number of people willing to help. 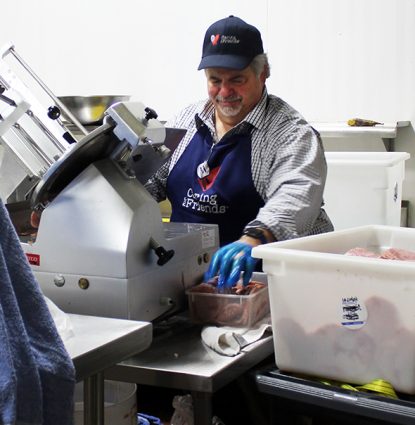 Caring for Friends CEO Vince Schiavone rolls up his sleeves to work in the kitchen slicing ham for Easter dinners prepared by seminarians of St. Charles Borromeo Seminary March 31 at the Northeast Philadelphia nonprofit for food and friendship. (Maria Pisano)

“Caring for Friends is a volunteer organization, fortunate to have a network of 10,000 faith-based, corporate, and individual volunteers who helped us distribute 12 million pounds of food last year, and meals for 10,000 homebound people,” said Vince Schiavone, CEO of Caring for Friends.

“The seminarians have been volunteering for two years, and we are truly grateful for their service. As April is International Volunteer Month, we seek more dedicated people like them to sign up for shifts to help us serve our hungry neighbors suffering under the weight of inflation.”

Volunteering with others outside the seminarian community has been “an absolute blessing,” according to St. Denis. Caring for Friends receives frequent volunteers from other organizations, such as schools, community groups, corporate teams and faith communities who volunteer alongside the seminarians.

Additionally, he said a great benefit has been the fraternity that’s grown among the seminarians. This was evident as they organized the assembly line and jumped in to help one another.

But St. Denis said it goes beyond the walls of Caring for Friends, as the young men hang out with one another after the apostolate day is over.

When asked about beating the record for packaging meals, previously held by seminarians in St. Charles’ College Division, Tanguay said, “In this case, everyone wins.”

With 4,035 meals going to the hungry, everyone wins indeed.

Maria Pisano is coordinator of Faith-Based Partners at Caring for Friends. 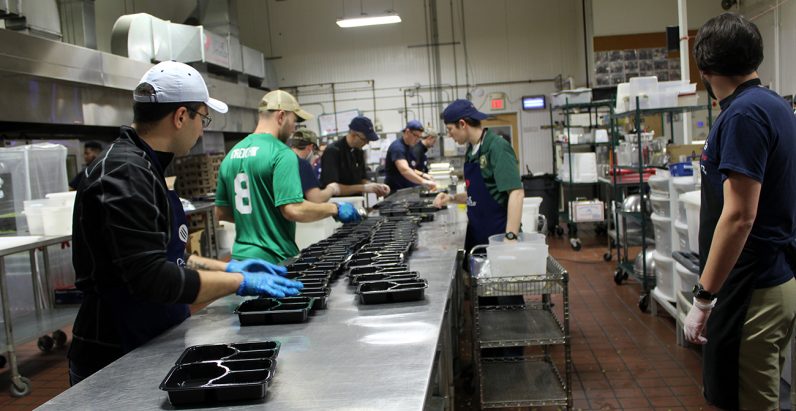 PREVIOUS: Police ministry shows ‘behind the badge, there’s a human being,’ says archbishop