Police ministry shows ‘behind the badge, there’s a human being,’ says archbishop 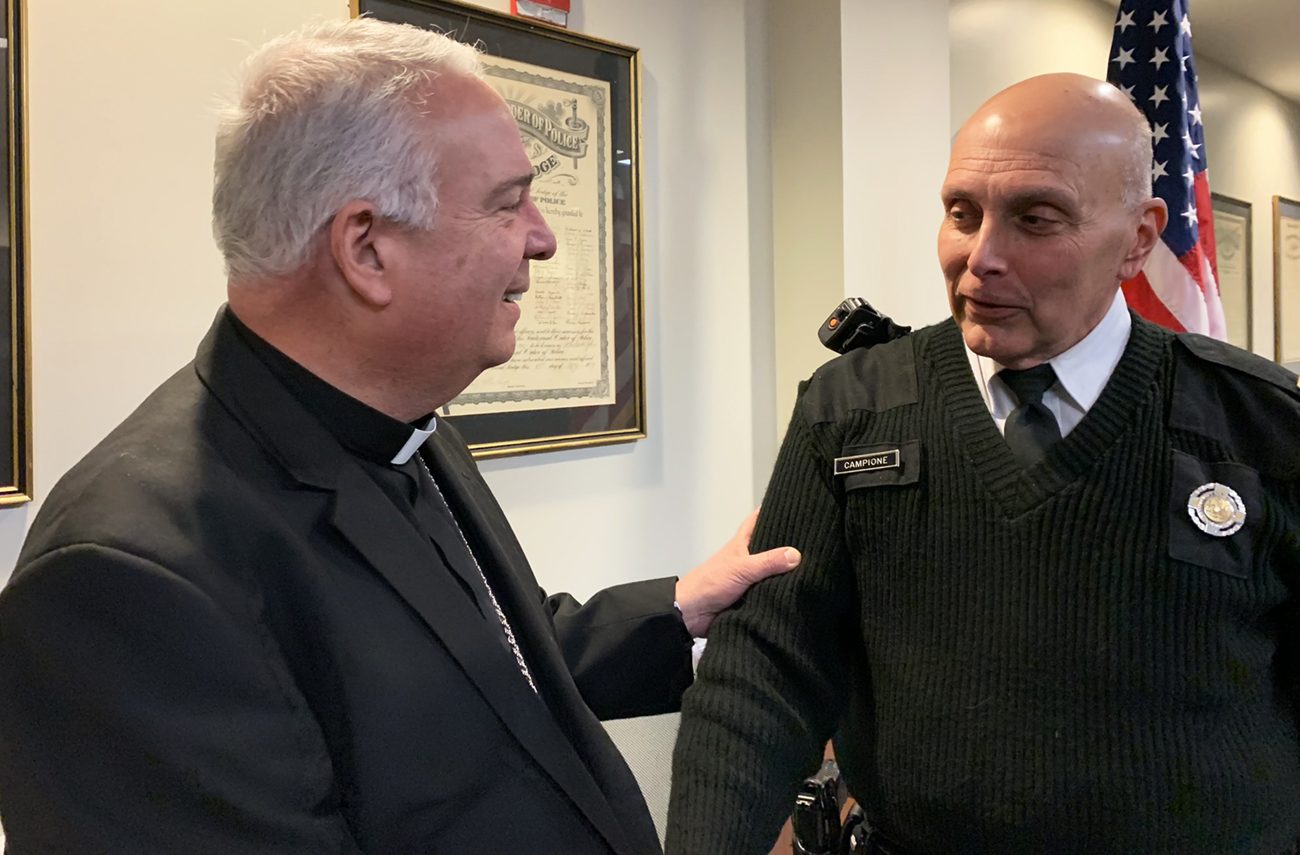 Archbishop Nelson Pérez greets Philadelphia Police Captain Louis Campione during a March 30 meeting with the members of Michael the Archangel, a pastoral ministry for police officers based at Fraternal Order of Police Lodge #5 in Philadelphia. (Gina Christian)

A unique outreach to Philadelphia police recently welcomed Archbishop Nelson Pérez for a Philly-style cheesesteak lunch — and an in-depth conversation about the challenges faced by those in law enforcement.

On March 30, the archbishop met with several board members of the Michael the Archangel Ministry, based at the Philadelphia Lodge 5 Fraternal Order of Police (FOP).

Prior to sharing a meal with the board, Archbishop Pérez visited with FOP president John McNesby.

Named for the patron of police officers and led by Oblate Father Steven Wetzel, the nonprofit Michael the Archangel Ministry — which Father Wetzel describes as “multidenominational, rather than nondenominational” — provides pastoral care, crisis ministry and spiritual enrichment opportunities.

The ministry fills a vital need for police officers, who “don’t exactly deal … with the best of the world” in the line of duty, said Archbishop Pérez.

Homicide, gun violence and drug overdose rates have reached record levels in Philadelphia and in a number of major U.S. cities.

“You’re now seeing three, four people shot at a time,” said Philadelphia Police Sergeant Michael Cerruti, a co-founder and board member of the ministry. “You’re basically on a battlefield in the city.” 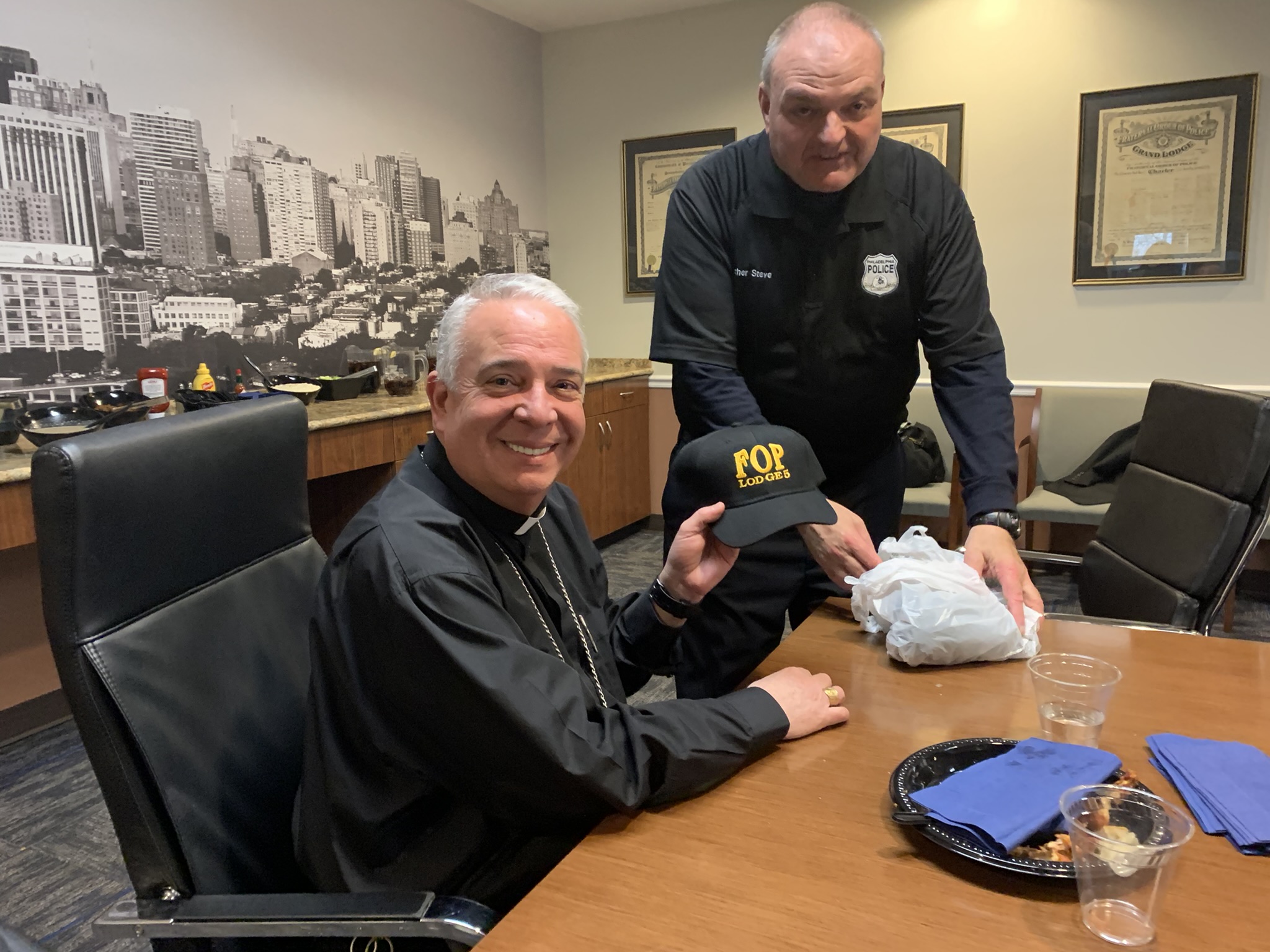 “Anti-police sentiment” and calls to defund law enforcement have undermined morale amid what is already a difficult and dangerous profession, said Archbishop Pérez.

While acknowledging broader issues of social and prison reform, the archbishop said “cops have gotten beaten up in the last several years; very beaten up. And in the end, you’re there to protect and serve. … Those that society has beaten up are the ones they call when they’re in need.”

Before Michael the Archangel Ministry was founded in 2014, many officers “used to be at the bar to handle such situations,” said Cerruti. “And that wasn’t healthy.”

The ministry began to develop through a chance encounter between Cerruti and Father Wetzel, then pastor of the former St. Joachim Parish in the city’s Frankford section.

When Father Wetzel called for police assistance with a neighborhood drug problem, Cerruti – then an indifferent Catholic working in undercover narcotics – sent a few police to follow up.

“It led to us going to visit (Father Wetzel) on a regular basis in the rectory kitchen, and having all kinds of conversations, and even confessions at the kitchen door,” said Cerruti. “And during those conversations, we talked about a lot of the issues police officers deal with and how to confront those issues.”

Creating the ministry made sense, especially since an estimated “67% of the FOP membership is Roman Catholic, as far as we can identify,” said board member Captain Louis Campione.

Yet Michael the Archangel serves police officers of all faiths, especially since most of the thousands served by the ministry “feel free to talk to Father (Wetzel)” directly about almost anything, said Cerruti.

That closeness is born of what Father Wetzel calls the priestly mission of “presence.”

Whether celebrating pre-dawn Masses for officers between shifts, blessing police in roll call rooms, or riding along on the overnight “last out” shift, Father Wetzel said “it’s important to be with (police) on the street and on the job.”

“It’s such a comfort for us,” said Bachmayer.

“There are a lot of people that will not go for help because they’re embarrassed,” she said. “But because Father is so personable, it’s easy to talk to him about problems. It’s stress, it’s trauma, and you need an outlet.”

Cerruti said the ministry “uses faith to help officers on the right path.”

And that approach shows “behind the uniform, there’s a human being,” said Archbishop Pérez. 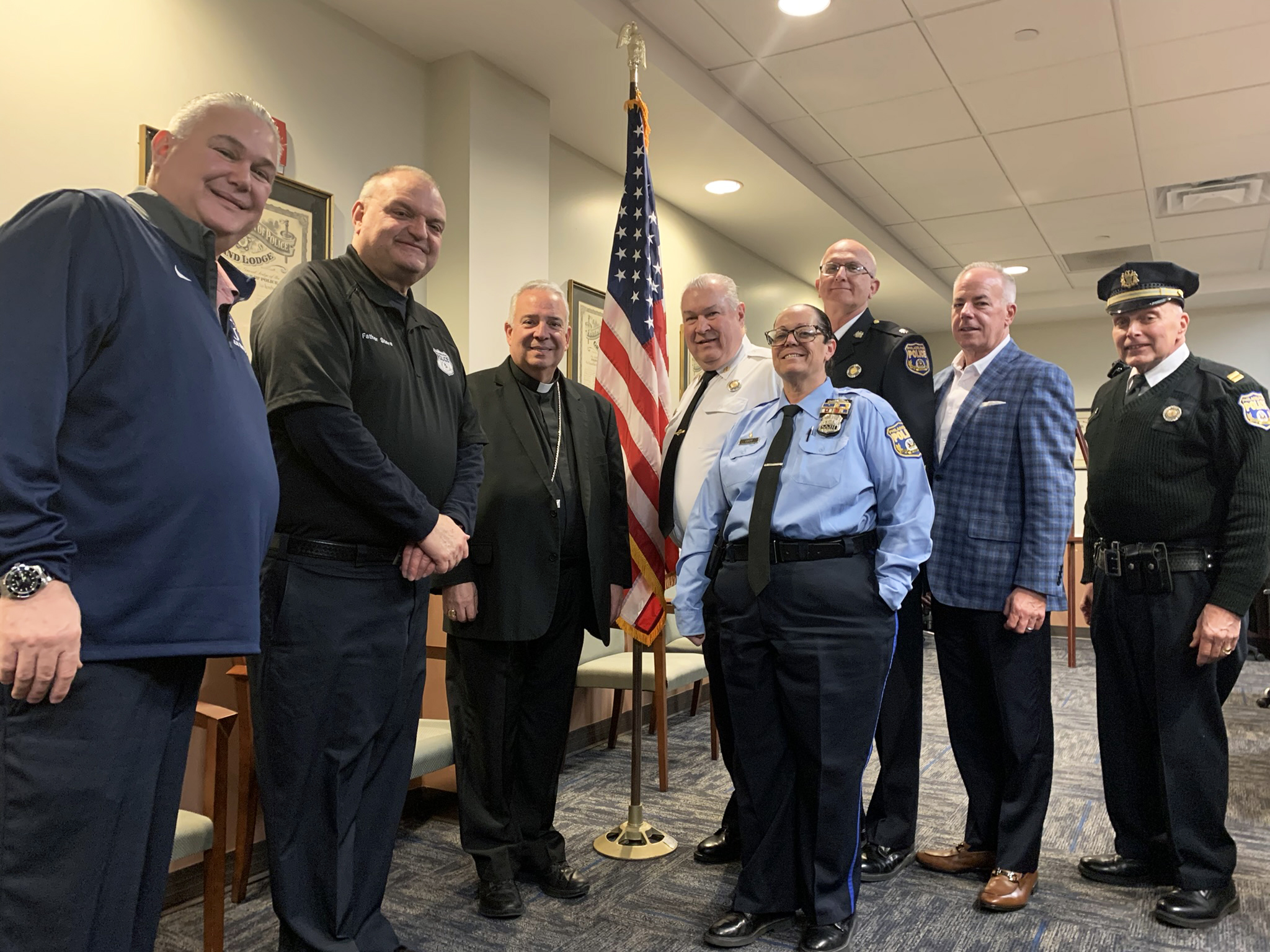 Archbishop Nelson Pérez met with several board members of the Michael the Archangel Ministry based at the Fraternal Order of Police Lodge 5, march 30. (Gina Christian)

NEXT: Seminarians prepare 4,000 meals for the needy at Caring for Friends