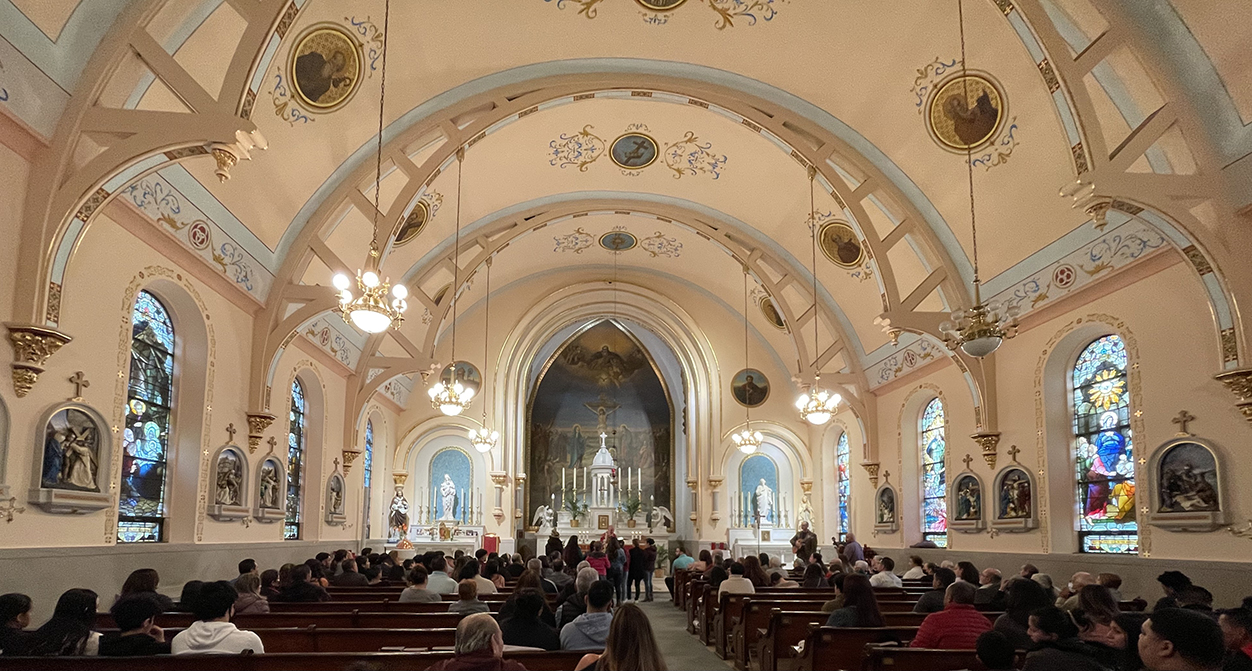 Palms are blessed by Father Dennis Mooney, pastor, April 10 at St. Mark Church in Bristol, which saw fresh paint among other improvements in an ongoing restoration project of the church. (Photo by Jaunita B. Diamond)

The scaffolding came down and the drop cloths were removed just in time for parishioners to mark Palm Sunday Masses at St. Mark Church in Bristol, April 10.

It was a homecoming for members of the 177-year-old church because Masses had been held at nearby St. Ann Church, a worship site of St. Mark’s since their merger in 2014, after renovations began at the end of January.

The work done in St. Mark Church included painting the walls and partially restoring the five arches of the church that accentuate the portraits of the 12 apostles on the ceiling over the pews.

New flooring was installed in the sacristy, where the priests and altar servers prepare for Mass, said the parish’s pastor, Father Dennis Mooney.

The church’s pews, installed more than 100 years ago, were stained to bring up the original darker finish.

The organ, donated three years ago by parishioner Betty Rodgers, got a visual touch up with the repainting of the gold gilding on the organ’s pipes.

Of the five ceiling arches, three remain to be finished, but that will have to wait until after Easter, the pastor said.

The cost of the renovations was just over $40,000 — a needed expenditure in order to maintain the upkeep of an important landmark in Bristol Borough’s history, Father Mooney said.

The parish did not mount a fundraising campaign, but several generous parishioners voluntarily contributed a total sum of $30,000 toward the project.

“I am grateful for the generosity of those who contributed,” Father Mooney said, adding that in the future, he hopes to restore the painting of the crucifixion located behind the main altar.

That will be costly because it would require the skill of an artist.

In addition, Mass schedules at the parish will change beginning May 1.

PREVIOUS: ‘Naked evil’ of atrocities in Ukraine only ‘tip of the iceberg,’ say archbishop, faithful

NEXT: Teen ‘lives mercy’ by helping women with most basic needs