‘Naked evil’ of atrocities in Ukraine only ‘tip of the iceberg,’ say archbishop, faithful 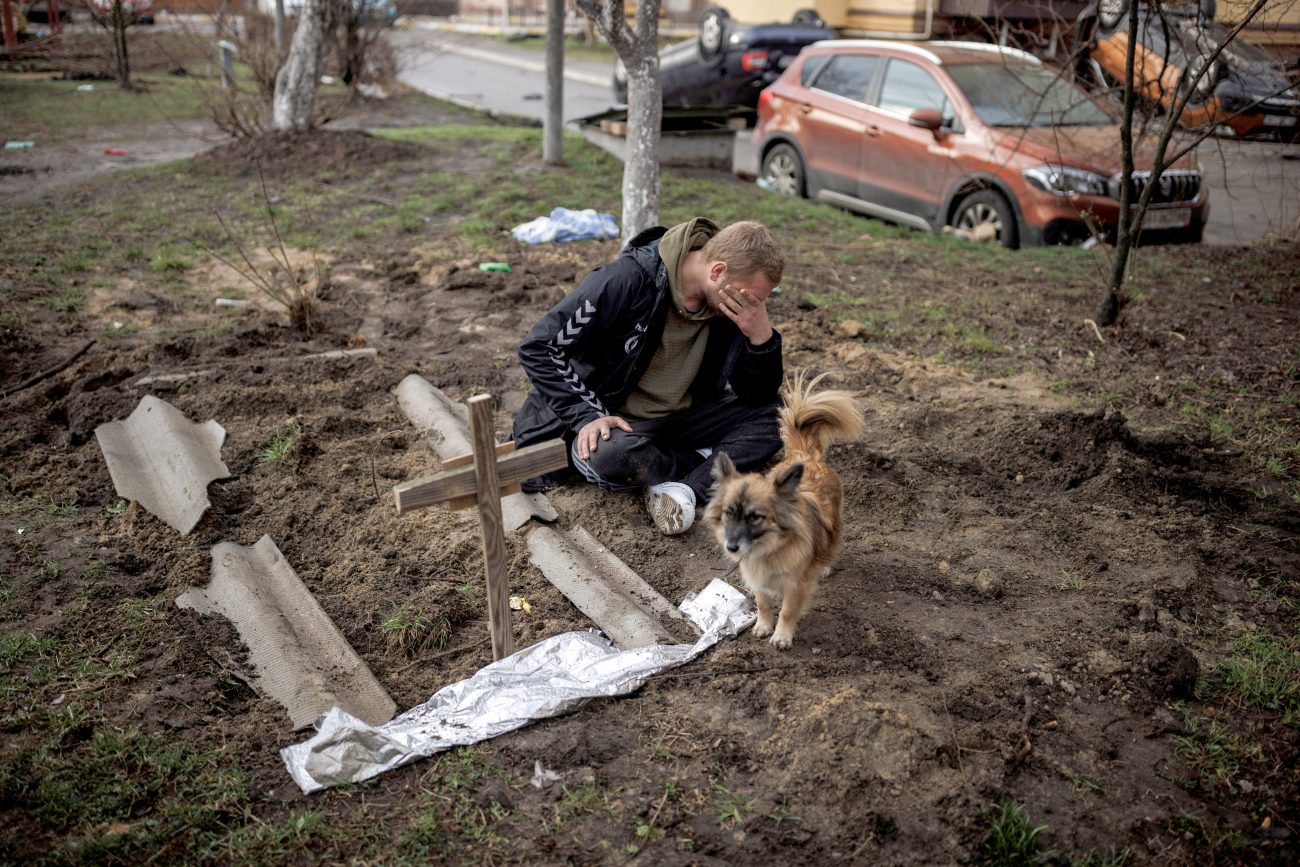 A man mourns next to the grave of his friend in Bucha, Ukraine, April 6, 2022. The Ukrainian Council of Churches and Religious Organizations as well as individual religious leaders have condemned the atrocities apparently committed by Russian troops in Bucha and other cities. (CNS photo/Alkis Konstantinidis, Reuters)

Atrocities against civilians amid the latest Russian invasion of Ukraine have sparked global outrage – but even worse are revelations pending, warn local Ukrainian Catholic clergy and faithful.

“The massacre of innocent civilians in Bucha, Borodyanka, Irpin, Hostomel and many other places … is just the tip of the iceberg,” said Archbishop Borys Gudziak of the Ukrainian Catholic Archeparchy of Philadelphia, metropolitan archbishop for Ukrainian Catholics in the U.S. “There are more occupied and besieged territories of Ukraine where it can be expected much more torture and death will be exposed.”

Shortly after Russian troops withdrew from towns surrounding Kyiv March 31, journalists and other eyewitnesses began releasing photos and videos of mass graves and mutilated bodies, some with their hands tied and bearing close-range bullet wounds. Survivors have recounted summary executions, torture and rape at the hands of Russian troops.

Satellite imagery from Maxar Technologies – which provides data to U.S. and international defense and intelligence agencies — shows bodies strewn on one Bucha street from at least March 19, refuting Russian claims that the deaths were “staged” by Ukrainians after the Russian retreat.

“We could talk about this as genocide,” said Father Roman Pitula, rector of the Ukrainian Catholic Cathedral of the Immaculate Conception in Philadelphia, which hosted an April 3 Stations of the Cross service for Ukraine. “It’s inhumane. People buried together with their hands tied, bullets in their heads … men, women, children, young adults being killed.”

The discoveries, condemned by the U.S. and other nations as war crimes, have prompted a number of investigations and pushes for criminal prosecution, with Ukraine President Volodymyr Zelensky calling for a Nuremberg-style tribunal to hold perpetrators accountable.

Though shocked, Ukrainians “are not completely surprised” by the killings, said Archbishop Gudziak in remarks delivered April 6 at St. Josaphat Ukrainian Catholic Seminary in Washington, D.C.

Massacres “commanded and organized” by Russia “have a long history in Ukraine,” he said. “Given President Putin’s hateful rhetoric and explicitly expressed intentions of destroying Ukrainian statehood, the country can expect much more brutality.”

Since Russia invaded Ukraine Feb. 24 – eight years after annexing Ukraine’s Crimean Peninsula and backing the separatist Donetsk and Luhansk territories in Ukraine’s east – thousands have been killed and more than 10 million displaced, with 4.3 million of that number fleeing to neighboring countries. 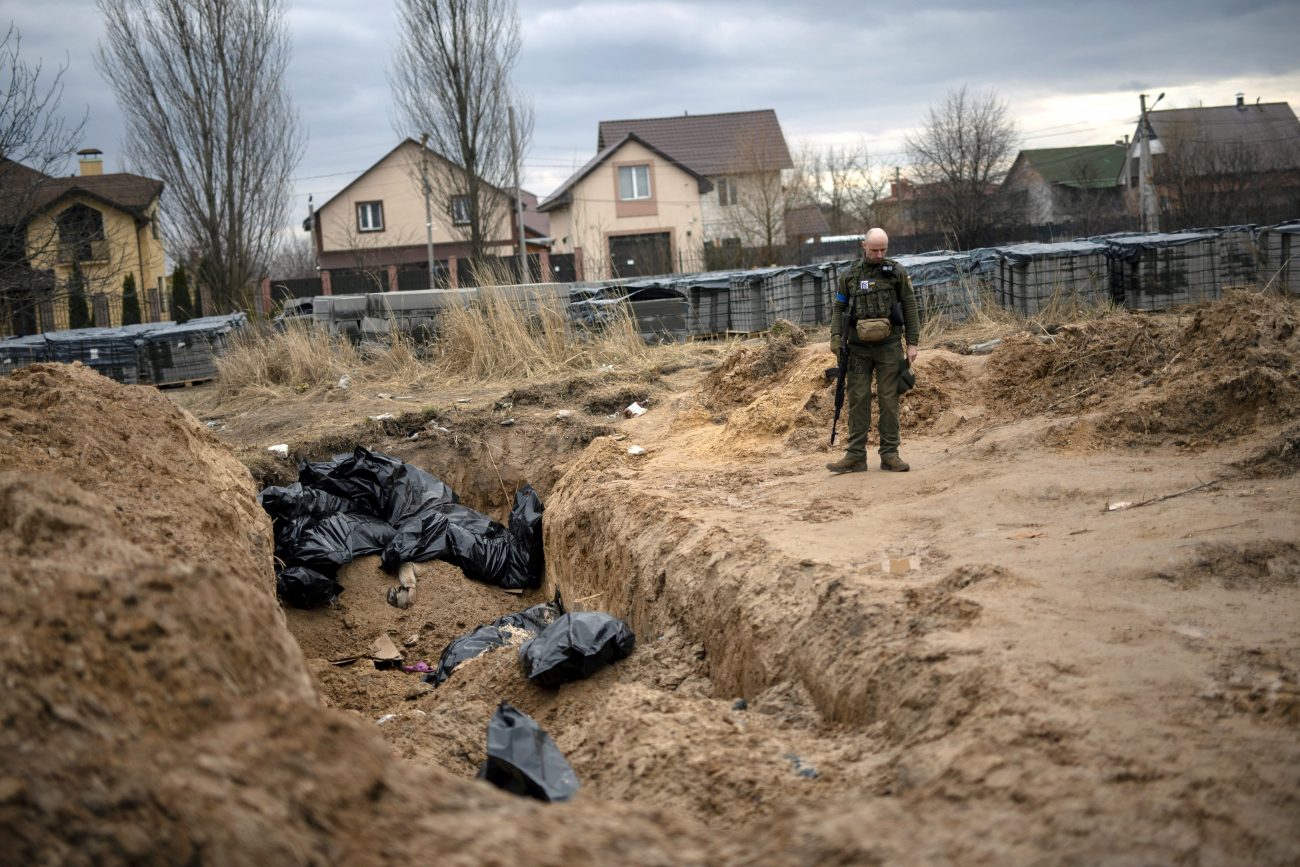 A Ukrainian soldier reacts after paying his respects next to a mass grave with bodies of civilians in Bucha, Ukraine, April 6, 2022. The Ukrainian Council of Churches and Religious Organizations as well as individual religious leaders have condemned the atrocities apparently committed by Russian troops in Bucha and other cities. (CNS photo/Alkis Konstantinidis, Reuters)

An April 8 missile attack on the Kramatorsk train station killed at least 50, including several children, and injured some 100 civilians fleeing the region ahead of an expected intensification of Russian assaults on eastern Ukraine. Kremlin media blamed Ukraine for striking its own citizens, while Zelensky posted on Instagram that Russian forces “are cynically destroying the population” as part of “an evil that has no limits.”

Archbishop Gudziak said in the besieged port city of Mariupol, where some 5,000 civilians are believed to have been killed so far, “the elderly, the handicapped, the sick (and) the hospitalized are in lethal danger.”

Given the relentless Russian shelling of that city, “there is no telling how many thousands of people may be buried under the rubble,” he said. “If it comes to be occupied, there is a fear of Bucha-like consequences.”

Putin himself “has never stepped back” from his roots as a foreign intelligence officer in the Soviet KGB (“Committee for State Security”), said Archbishop Gudziak.

That agency itself and “its antecessors the NKVD and the Cheka (both Soviet secret police) were ruthless enforcers of Soviet Russian totalitarian rule,” said the archbishop.

The latest attacks form part of a centuries-long “pattern by Moscow to eradicate Ukrainian national identity and to compel the subjugation of Ukraine,” said Eugene Luciw, president of the Ukrainian Congress Committee of America’s Philadelphia chapter and a member of Presentation of Our Lord Ukrainian Catholic Church in Lansdale.

Luciw said that effort “began with Czarina (Empress) Catherine II” and her predecessor, Peter I, whose reigns during the 17th and 18th centuries ultimately saw “the Ukrainian people put into peasant slavery.”

During the 20th century, Soviet Union premier Joseph Stalin “sought to eradicate the Ukrainian people through genocide, (via) an artificial famine (known as the Holodomor) that resulted in the deaths of no fewer than four million, and likely 6.5 million Ukrainians,” said Luciw.

Now, “on the eve of Holy Week … naked evil is before our eyes” once again, said Archbishop Gudziak. “The suffering of our Lord, who took upon himself the sin of the world, is excruciating because it consists of the crucifixions in Bucha, Borodyanka, Irpin and Hostomel. Jesus is being crucified … with the innocent victims.”

In response, the world must ask “if we are able to watch 44 million people getting obliterated” without intervening, said Luciw.

Christians in particular are called to hold out hope for peace, healing and conversion, he said.

“We must remain open to the possibility of providing the Russian people a chance to learn, to recover, to change,” said Luciw, pointing to the rehabilitation of Germany and Japan after World War II. “We have to use that model and constantly be willing to forgive, to educate.”

A restored Ukraine “might be the very vehicle by which the people of Russian are converted themselves” to embrace a “diverse society that (is) tolerant of all the freedoms associated with democracy,” he said.

Father Pitula agreed, saying that although “Ukraine is going through her passion … (there) will be a resurrection of our Ukraine – the newest, the best, the most prosperous and … the most Christian.”

“Our hope is in the one, holy Lord,” said Archbishop Gudziak. “He conquers death with his death, and gives us new life.”

PREVIOUS: Catholic schools’ agreement with Faith in the Future to end June 30

NEXT: St. Mark Church, Bristol gets facelift for Holy Week