This is the first in a series of six profiles of the men to be ordained new priests for the Archdiocese of Philadelphia on May 21. 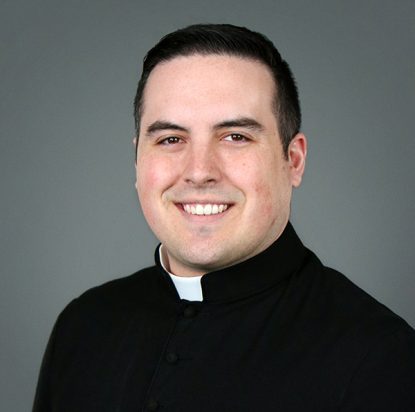 It was the summer of 2014, and Andrew Auletta was on an archeological dig in Israel, the Holy Land. A history major at Penn State University, Auletta and the team of more than 30 people found broken pottery shards, metal fragments and animal bones dating back to the Iron and Bronze Ages.

“It’s maybe two or three feet of dirt, but it’s separated by hundreds and thousands of years,” Auletta said.

As fascinating as the experience was, it was a priest named Father Emmanuel from the San Bernardino Diocese in California who made a lasting impact on Auletta during that trip.

“My interactions with him reinvigorated my faith, that sense of peace and belonging to the church,” he said.

Though raised Catholic, Auletta admits that practicing his faith was not a priority during this time. “It was a secular dig, no religious dimension to the dig itself, but it just so happened that this priest applied for the dig. It was like an indicator.”

The priest was “a good mentor for those six weeks” in Israel, Auletta said, providing him with the sacrament of penance, and then they started celebrating Mass on Sundays.

“It changed my perspective. I hadn’t been going to Mass while I was in college,” said Auletta.  “So, being able to do that in the Holy Land was really powerful. We had people from all different faiths at the Masses. One guy was Mormon, some Protestants, and a few Catholics. It was a beautiful experience to have people come together. It was very peaceful.”

Soon after returning home from Israel, during his senior year at Penn State, Auletta started discerning the priesthood, a desire he had initially felt in high school but put aside during his college years.

Auletta is now a transitional deacon in the Archdiocese of Philadelphia, and along with his five classmates, he will be ordained into the priesthood on May 21 at the Cathedral Basilica of SS. Peter and Paul.

He grew up in Newtown, Bucks County, the oldest of Rick and Kathy Auletta’s three children.  Auletta has two younger sisters, Allison and Mary.

A member of St. Andrew Parish in Newtown, Auletta attended PREP and was an altar server during his childhood.

“My whole family is very devout Catholic,” he said. His family attended Sunday Masses together weekly, though Auletta admits, “I was the typical kid who didn’t want to go to Mass on Sundays.”

As a teenager, Auletta attended Notre Dame High School in Lawrenceville, N.J. It was during this time that he noticed his parents “digging deeper” into their Catholic faith by attending faith-related groups and studies.

“I noticed a significant turnaround my sophomore year of high school,” he said. “I was able to ask my dad questions about the faith, questions I thought were difficult, and he was able to answer them immediately.”

After two years at Sacred Heart University in Bridgeport, Connecticut, which Auletta describes as a small school “where everyone knew each other’s business,” he transferred to Penn State, University Park, where many of his friends attended and he enjoyed a larger social environment filled with fraternity parties and Nittany Lions football games.

But ultimately, Auletta found this to be an empty lifestyle.

“It was after the trip to Israel that I started feeling this interior tension,” he said. “I knew in my heart the Lord was asking me to go to seminary, and I was resisting quite a bit. I didn’t even want to think about it. I wanted to go right into some sort of academic work or business, make some money, and start a family.

“I think everybody as a senior in college experiences that anxiety of not knowing what the next step is in life,” he added.

Auletta says he turned to prayer to help in his discernment. “I started going to the eucharistic adoration chapel on campus after class about two or three times a week, and praying for about 15 minutes,” he said.

The chapel provided Auletta with an opportunity for quiet contemplation. “I said a rosary or Divine Mercy Chaplet. I felt what was in my heart during those moments of quiet prayer, a deep, deep peace that I wanted to pursue. And that peace ultimately led me to seminary,” he said.

He said the discipline of seminary life has been one of the most challenging things for him. “It took me a few years to get into the habit,” he said.

Auletta also said that the clergy sexual abuse crisis in the church has also been difficult for him, and “that was part of the reason why it took me so long to discern God’s will.”

But it was the thought of “the people we were going to be serving as priests” that helped him move forward. He realizes that “Christ is still alive, loves all of us, and I was actively experiencing his peace and his mercy,” and he wants to share that with others.

“The church is trying to actively address the crisis now,” said Auletta. “I think Pope Francis’ synod on synodality is really key, active transparency with the lay faithful, and incorporation of the lay faithful into the clergy’s life. Assimilation is really important, and he’s trying to address some of the pitfalls that got the church into many problems.”

Auletta added that many priests he’s known throughout his life have inspired him by their examples. “Their witness, their faith, their commitment to their priestly ministry amidst everything has been really inspiring to me.”

He’s also found inspiration in the Catholic saints. While in the seminary, he developed a deep devotion to the mystics including St. Ignatius of Loyola, St. Therese of Lisieux, St. Teresa of Avila and St. Catherine of Siena, who “journeyed into their own interior life and found Christ there, and found peace,” Auletta said.

Following his May 21 ordination, Auletta said he looks forward to celebrating the Mass.

“I’ve grown in such a deep devotion to the Eucharist, and I still can’t wrap my mind around elevating the host, elevating the chalice, and an actual miracle taking place in the transubstantiation,” he said. “It’s a mystery that I’ll never be able to fully understand, at least in this life.”

Though he’s explored the Holy Land, Auletta said he’s found great insight through exploring his own interior life: “You never know the world that you have inside your own heart, that the Lord desires to open up to you.”

NEXT: Journey from politics to priesthood helps lead others to heaven