This is the second in a series of six profiles of the men to be ordained new priests for the Archdiocese of Philadelphia on May 21. 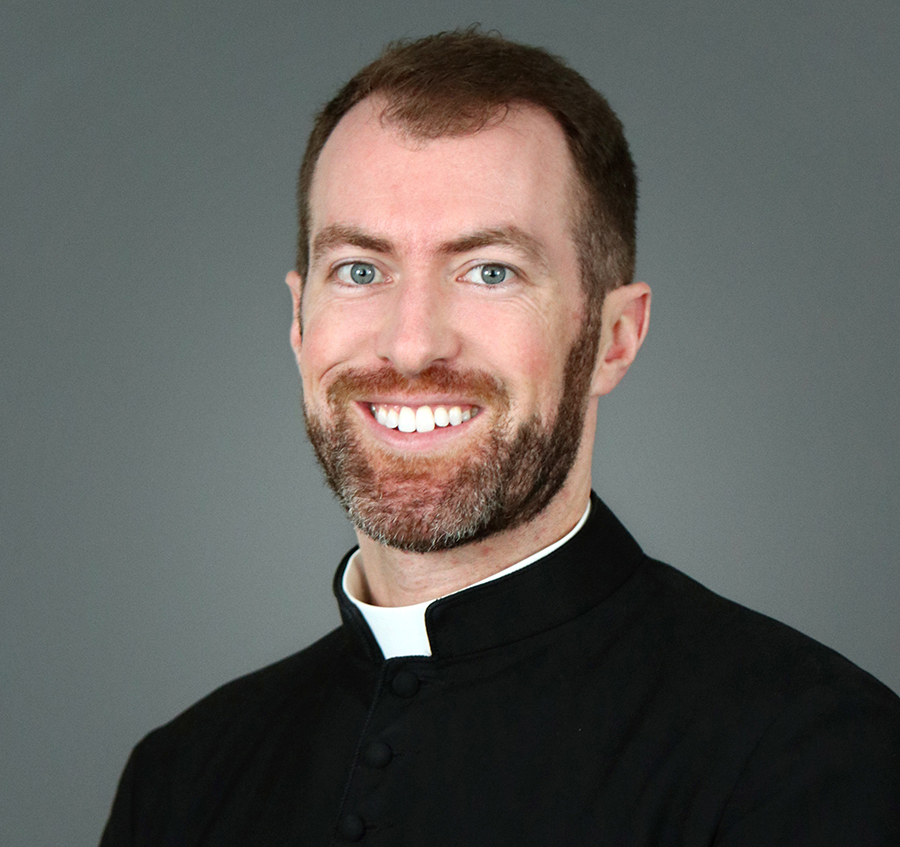 Transitional Deacon Henry Graebe left a professional career in the nation’s capital to enter the priesthood and “lead others to heaven.” (Sarah Webb)

It was after a summer college semester abroad in Uganda that Henry Graebe, then a University of Scranton junior, first thought about the priesthood.

“That was the first time I considered a possible vocation,” he said, “but I was not ready to commit to it at that point in life, but those seeds were planted.”

Graebe is now a transitional deacon in the Archdiocese of Philadelphia, and along with his five classmates, he will be ordained into the priesthood May 21 at the Cathedral Basilica of SS. Peter and Paul.

Graebe says he grew up “in a typical Catholic family,” the third of four children of Alice and Henry Graebe, Jr. in Freehold, N.J. He has two sisters, and his older brother Brian is a pastor at a Catholic parish in Lower Manhattan.

Graebe describes his family, members of St. Rose of Lima Church in Freehold, as “very committed to getting to Mass every weekend.  It was always the top priority.  Even when we were on vacation, there was never a question if we would go to Mass.”

Graebe says he enjoyed playing baseball and ice hockey throughout his childhood and as a student at Red Bank (N.J.) Catholic High School.

Yet it was during high school that Graebe says he “fell away from the faith” during his junior year.

“You get to a point where you’re faced with the question,” he said, “if you’re going to make the faith your own, or is it something you’re going to continue to do because that’s how you were raised? I think high school is the ripe age that to start asking those questions.”

During this time, Graebe says he also experienced a growing interest in politics.

“Growing up, politics and religion were conversations that were pretty regular around the dinner table,” he said.  “I always loved listening to my older brother, my dad, and my mom weigh in (on issues). I wanted to start to contribute to the conversation, not just in the family, but in a broader venue.”

This led Graebe to become a political science major at the University of Scranton.

He was a college student around the 2008 U.S. presidential election, and the Scranton area “seemed like we were the nexus of politics at the time,” as major candidates visited his college campus, including former presidential candidates John McCain and Hillary Clinton.

Amid the electoral buzz, Graebe says one of his professors offered him the opportunity to spend the summer abroad in Uganda.

“It didn’t matter to me what the course was,” Graebe said.  “I thought a summer in Uganda sounded great.”

He later learned that he would be taking the university’s “Christianity in Africa” course.

To prepare for his trip, Graebe start doing online research, and discovered the great poverty he would encounter while in Uganda.

“They looked like the poorest people in the world,” he said.  “They had no shoes on their feet, no running water, limited access to food, limited access to healthcare, no luxuries like iPads and Netflix, and all of the other luxuries we have” in the U.S.

After their arrival in Uganda, Graebe and his classmates lived in huts with no running water, though Graebe noticed that the Ugandan people he met “radiated joy” and that “they were the happiest people I ever encountered in my life.”

He says he found himself wondering how the Ugandan people could have so little in terms of material goods, yet seem happier than he himself felt inside.

After returning home for his junior year in college, Graebe said he found himself still wondering about the happiness of the Ugandan people.

“And I eventually realized that the one thing they had that I didn’t have in my life is God,” he said.

Graebe says this experience started him down an “academic faith journey.”

He started attending Mass at a Scranton parish, and encountered two young priests whom he described as “energetic and very holy men in how they celebrated Mass and the sacraments.”

Graebe started asking them his questions about the Catholic faith, and “they always had well-thought out, reasonable answers,” he said.

He also talked with his brother Brian, who was at St. Joseph’s Seminary in Yonkers, N.Y.

“I’d just pepper him with questions.  =He was always able to answer them,” Graebe said. “I realized after a while that our faith is a reasonable faith, and it makes sense. It’s cohesive; it all ties together so perfectly.”

After graduating in 2009 with a bachelor degree in political science, Graebe decided to postpone law school for a year in order to gain some work experience in Washington, D.C.

“I got to travel to Alaska, Florida, Las Vegas, all over the country. I got to stay in nice hotels and eat nice meals,” he said. “It seemed like I was living just a great life. I had everything I wanted. It didn’t satisfy me.”

He said he felt God was asking more of him.

Yet he admitted he “continued to delay” his response to what he was feeling, and it “took … a few more years, a few more jobs” before he was ready to discern a vocation more seriously.

At a friend’s recommendation, Graebe says he found a spiritual director, an elderly priest of Opus Dei, a Catholic institution founded by St. Josemaría Escrivá.

“You’re too comfortable in life right now,” said the priest, according to Graebe. “You need to start going to daily Mass more often. This isn’t going to go away. You’ve been thinking about a vocation for years. If you find you have a vocation, you have to answer that call.”

Shortly after that conversation, Graebe was sitting at his office desk when he noticed someone had turned on the television for the September 2015 arrival of Pope Francis in Philadelphia.

Graebe looked at the television, and for the first time, he saw St. Charles Borromeo Seminary in Wynnewood.  “I had never heard of St. Charles,” he said. “All the seminarians were lined up in front of the big, beautiful building” awaiting Pope Francis.

Graebe eventually attended a “Come and See” discernment retreat at St. Charles, and he entered the seminary in the fall of 2016.

He said seminary life was “a big adjustment” after having his own apartment and making his own schedule, but that “there’s a great fraternity here. I can knock on anyone’s door; you have all of your friends living around you.  You’re surrounded by friends.”

Following ordination, Graebe said he looks forward to being able to offer the holy sacrifice of the Mass and to hear confessions.

Having had the experience of being away from the faith for a number of years and then returning to the Catholic Church through the sacrament of confession, Graebe says, “I would like to be able to reciprocate that experience to the people, to be on the other side of the confessional and absolve sins. There’s a lot of humility and gratitude in being able to do that.”

“Trying to lead people to heaven,” he said.  “I don’t know what greater call there could be.”

PREVIOUS: College trip to the Holy Land led to interior journey, and priesthood

NEXT: Mission trip to Haiti ignited his zeal to become a priest